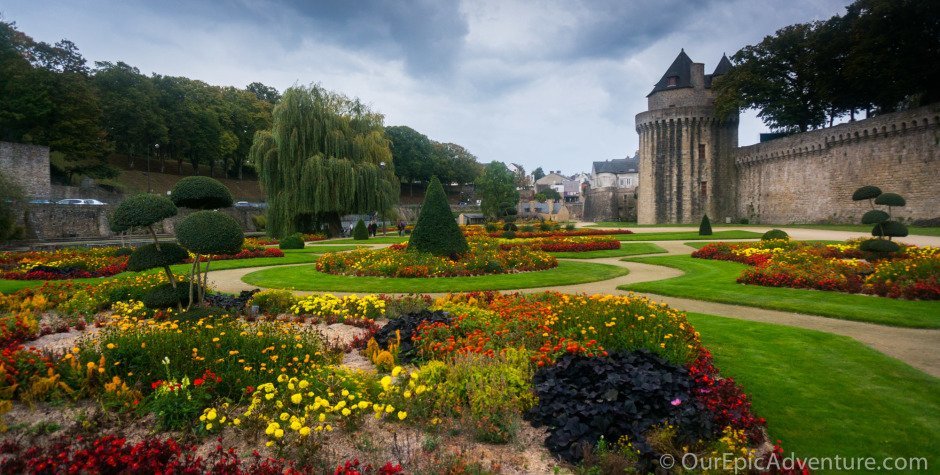 Does France get any cuter than Brittany?

Brittany is just a few hours outside of Paris and a mecca for many things dear to our hearts (or at least Jewels’s): cider, crepes, oysters, and beautiful landscapes. Our friend Sophie had planned a surprise 4-day road trip for us to contrast our culture shock and city time.

The first day, Thursday, we left Paris and spent the day exploring the Loire Valley. From there, we drove to Rochefort-en-Terre in Brittany (or Breton, as it’s known in France), arriving late and exhausted. Friday morning we woke up in Rochefort, had breakfast, and strolled around this unbearably adorable town where everything is picture perfect, the houses match stylistically (right down to the flower planters, which also match the flowers in what used to be the community well), and it feels like walking into a living museum. Now it seems to have a small regular population with a weekend influx of Parisians.

The house we stayed in belongs to a friend of Sophie’s father, who was incredibly generous in letting us stay there. It was super adorable. In the center of the village, it blends right into the town look. Inside, it’s also like stepping back in time, plus décor elements including some crazy swords and a few beautiful (and slightly creepy) witch puppets. The owner of the house is a lamp-maker, so there are a bunch of beautiful lamp bases as well. Plus two cats – one black and one tabby – who were a bit shy but still adorable.

Here in Brittany, people speak French (of course) but all signs are also in the local Breton language, which I need to learn more about. It’s totally different from France at first glance. We’re not sure if it’s actually spoken or just kept on street signs as a tribute to the region.

To note, we have a few new favorite French words. “Mignon” is cute (or petite) versus “minou,” which is cat – yet somehow, with the idiosyncracies of French spelling, the pronunciation is very similar.  So:  filet mignon means cute filet! Also, the word “avocat” means both attorney and avocado! Somehow this news surprised the French people, although we don’t understand how they haven’t been confusing avocados and attorneys for years. Surely there must have been a contextual fail at some point! And, if you ever want to see something adorable, ask a French person to say “squirrel” in English. Or ask Americans to pronounce the word for cider (cidr) in French – which is really troubling because it turns out I want to say “cidr” regularly.

But back to Brittany. Our first morning, we explored around Rochefort. A short walk showed us where they used to wash laundry by a little stream, the community’s shops and restaurants, and the church. The church is from the 16th century so fairly “new” and has these gorgeous stained glass windows.

By the time we investigated lunch options at 1:30, most places were closed, but we went to the small-town-France equivalent of a pub for a super lovely meal quality (with similar quality to any French restaurant in the US). In the afternoon we drove a half hour to Vannes, a much larger but still adorable city. We strolled around the old city, saw the church, the old city walls, a beautiful planted garden presumably where the moat used to be (which was almost fancier than the gardens at Versailles), and the dock with the canal that was built to bring the sea to the land. All roads seem to land us at the church and port, just weaving their way differently from one to another. We ended the afternoon watching sunset with a cider at a bar by the port, listening to French hipsters imitate American accents from movies.

We bought some cheeses, bread, jams, cider, and wine for a French picnic-style dinner at home. The shops in Vannes were super adorable, and we loved how enthusiastic the cheese shop ladies were about their cheeses. It made us really wish we understood more French. She would pick up a cheese and enthusiastically describe it for 5 minutes – and could do that about every cheese in the shop. I was tempted to pick which cheese we should try, but it quickly became clear that Sophie’s suggestion to let the cheese shop lady choose a few for us was the right course of action.

Then off to pick up our friend Valentina from the train station…. We had met and travelled with Valentina in Rurrenabaque, Bolivia last November, and she was able to come spend the weekend with us, which was a fun treat. It was a little strange that we hadn’t been home since we met her a year ago, while she had since gone home, gone back to her regular work schedule for a year, travelled for 6 weeks in Indonesia, and returned back to work.

After we got back to Rochefort, the four of us indulged in our cheese-fest dinner, which was delicious and decadent. We were joined for a while by the neighbor of the house where we were staying, who had helped us get settled in. She was hilarious and a total trip – and it was amazing to see how well we could communicate with her despite our lack of a common language.

Brittany is famous for its cider, and I was happy to drink it on a regular basis. For those who don’t know, cider is my drink of choice. The Americans ciders are usually undrinkably sweet, but there are a few good ones. The Irish are the usual go-to in a bar and for an after-work drink. The French are less common in the U.S. but usually quite drinkable and a little more delicate than the Irish. Interestingly, the common way to drink Breton cider (somehow, I had no idea about this before) is out of a chilled small ceramic bowl or mug, which I now totally love.

Anyhow… that aside, we had purchased a bottle of cider (plus wine, of course) to have with dinner. We drove it home and placed it in the fridge to chill and let it rest. It had been still for at least 90 minutes when we went to take it out, but I still managed to have a little incident. You see, Irish cider and American cider are usually kept like beer in that style bottle and top (or else in a keg, because who doesn’t want a keg of cider?). French ciders have more of a champagne style closure. This time, I had just untwisted the wire and hadn’t even touched the cork when the cork flew up and we had a 3-foot tall stream of cider… which miraculously didn’t touch or damage any of the furniture (save the easily cleanable table) or touch any of the house’s décor. And only lost about a quarter bottle of cider.

The next morning, the four of us went back to Vannes. The Saturday morning market is every bit as beautiful as you might imagine… it has super gorgeous produce, goods, and the whole thing is adorable as hell. We had been thinking that France’s tagline should be “adorable but obnoxious,” but we realize that it’s really only Parisians who seem obnoxious. Everyone we met the minute we left the city was warm, friendly, and super lovely.

Then a wander through the fish market, or Halles aux Poisons (because everything sounds better in French). Brittany is also known for its oysters, which you can buy in the fish market for between 6 and 15 euros per kilo (what?!?!?!). I’m still kicking myself that we didn’t buy any for later, although we feel fairly confident that they would have quickly gone bad in the day around Vannes and the car-time back to Rochefort. Just one more reason that we need to come back to Brittany. Then we met up with Sophie’s friends Marie and Erik for lunch at a creperie. There weren’t any vegetarian crepes on the menu (which would have been a problem in Paris), but the waitress was happy to suggest they put together egg, mushroom, cheese crepes, which were phenomenal. For dessert, salted caramel crepe for Jewels and chocolate with pistachio ice cream for Mitch (all homemade, of course). Plus of course some Breton cider.

Later that afternoon, we drove to Suscinio, another village a half hour away on the water. We visited a beautiful little beach – where there were actually some people sunbathing and jumping in the water (in October!). Somehow it seemed weird to see natural marshlands – with egrets, herons, and other typical marshland sights – in France.

In Suscinio, there is a castle overlooking the beach and marshes, which is quite striking. It was closed so we didn’t go inside, but walking around the outside of the castle may have been the most interesting part. The old latrine set-ups are really interesting. And it’s fascinating to think about all the setups for defense around these castles. It’s obvious, but somehow still surprising, that they were actually made for defense reasons. This castle was built around 1200, which is a crazy concept, so the castle stood through barbarians and marauders, strong through the middle ages, medieval times, etc. To us, those times seem like fantasy, so it’s strange to think that this castle was here through the reality of it.

After driving back to Rochefort, we went to La Petite Bretonne for dinner, which our hosts considered to be the best creperie around (and it has a ton of awards humbly displayed on a wall. It’s run by a husband and wife – the husband is, by his own pronunciation, “a pancake maker,” and his wife was our adorably chatty server. She spoke mostly in French, but with a little English thrown in from her excitement, and she had spent time in Boston and New York, and was excited to tell us about the best triple hamburger she had in Brooklyn. For dinner, I had an ementhal, tomato, garlic-butter crepe and Mitch had chevre and hazelnut. For dessert, he had chocolate, banana, with chantilly and vanilla glace (ice cream), and I had crème de marron with chantilly and pistachio glace, which was absolutely delicious.

Through our travels, we keep intending to take photos of the most exciting meals, but we are always too excited to eat them that we forget to take photos. After not taking photos of the beautiful savory crepes we have had, we decided we could not pierce the dessert crepes with our forks until we had taken a quick snap, ice cream rapidly melting.

In the morning, before we left Rochefort-en-Terre, we bought Kouign Aman, a Breton regional specialty butter cake. By butter cake, we mean: imagine a croissant soaked in butter, then coated in sugar, then baked. Ridiculous. And probably about 2,000 calories in each single-serve pastry. Then Sophie drove the long way back to Paris and dropped us off at the Orly airport to catch our flight to Florence.

The most amazing thing is that Sophie hadn’t told us where we were going – so the whole weekend unfolded as an amazing surprise of French adorableness – aided by her internal GPS skills, which magically knew where we were at all times. We had both been to France before but never explored outside of Paris… and clearly France has a lot to offer – and Brittany may well be the crown jewel.

Truly, anyplace that is known for crepes, cider, and oysters has an immediate special place in my heart! And definitely warrants a return visit.

Below is the full collection of photos from Brittany. Feel free to click on one and scroll through them like a slideshow!