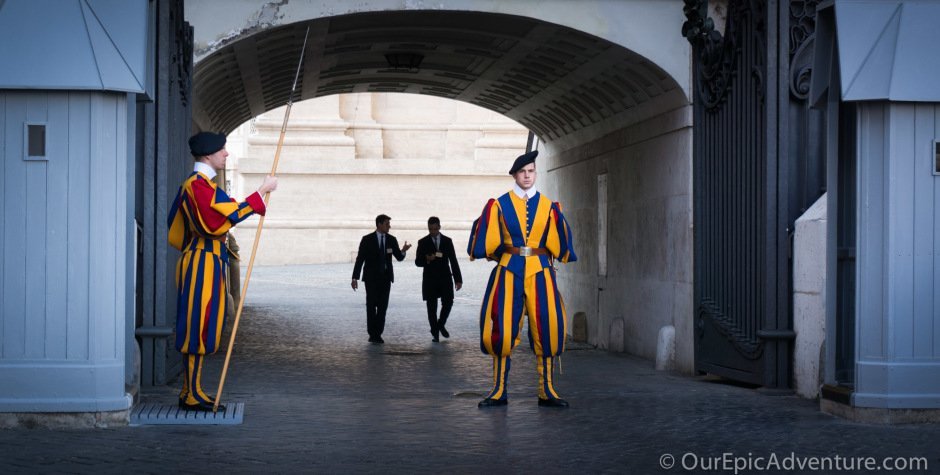 The smallest country in the world, Vatican City

When in Rome… tour the Vatican! Since it is its own sovereign nation, we decided that clearly it needed its own blog entry. It may have less than 1,000 citizens, it may be just about 110 acres (comparison: NYC’s Central Park is 850 acres), and we may only have been there for 4 hours… but it definitely adds a ticker to the list of countries we visited this year.

Note: To avoid the madly outrageous lines and have any hope of getting information, it helps to register in advance (online) for a tour. Unfortunately, those sell out, so it doesn’t hurt to register far in advance. We were only able to get two tickets, so Amy and Michael (Mitch’s parents) decided to skip out while the two of us tramped off early one morning for our Vatican tour.

En route, we paused for a little cross-cultural experience. We had received string bracelets as part of Hindu ceremonies in Rishikesh, India, which are supposed to be thrown into rivers when they fall off. One of Jewels’s had fallen off a day or two prior, so we decided that the Tiber River is just as good as the Ganga and we gave it a little blessing and sent it on its way.

Our Vatican experience consisted of a 3-hour guided tour with one of the Vatican tour guides, a walk up to the cupola (which requires a separate ticket), and then after a nice lunch at nearby La Vittoria, we started our afternoon city/art tour in St. Peter’s Square with a lot of interesting information about the history of the Catholic church and its role here.

So the information in this blog post comes from a mix of our official Vatican guide (whose name we don’t remember, and who was okay, but not phenomenal), and our phenomenal private guide Marta (more on her in our main post on Roma).

The Vatican tour started in the residential palace with its pine cone courtyard (aka Belvedere Courtyard). Apparently the pine cone dates back to the 1st century and moved around before settling here in the 16th century. It is flanked by peacocks (the symbol of mortality) and lions (the symbol of the church). The courtyard contains a new (1990) sphere, which an artistic rendering of the concept that historic art is destroyed in our efforts to understand it. Also in the courtyard, our guide pointed out the room/building where the calendar was changed in the 1500s.

Apparently this part of the museum/tour was the residential palace, which was built in the 16th century and renovated in the 19th century. Our guide said the Vatican museum(s) is the 3rd most visited museum in the world with 5 million people annually (after the Louvre and British Museum).

Near the beginning of the tour were some super old, and super impressive sculptures. For example, an Apoxyomenos sculpture… what we were looking at was a copy, made in marble and dating back to 50 AD, based on a bronze original from 320 BC, and equally old images of Apollo as the god of the hunt, and other gods and goddesses.

They were made as a display of perfect human form, created with masterful craftsmanship – which, as our guide said, was not recreated until Michelangelo hit the scene millennia later. The sculptures blended elements from Greek (focused on perfection) and Roman (focused on realism) artistic traditions, so you could actually see the veins in these 2,000 year old marble sculptures and it almost seemed like their blood flowed.

Going through the rooms, we saw floor mosaics from the Roman times, tapestries from the 1500s that were so detailed that they looked like paintings, and incredible ceilings that were painted to have 3D effects.

For example, the Gallery of Maps, which had a series of maps detailing the reign of the Italian empire and outrageous ceilings was created under Gregorius 13th’s papalcy (late 1500s) and is unrestored, or so they said.

The Raphael rooms with their masterful frescoes from the early 1500s were, of course, impressive, and were created because Pope Julius 2 refused to live in the same apartment as his predecessor. Here, each room was painted specifically for its purpose – banquet hall, private meeting room, and library, in which each wall was painted for its own specific purpose.

Then through the Borgia apartment, used by Pope Alexander 6th, who had the room’s notable frescoes painted in 1492, when Columbus was off sailing the ocean blue.

Onto more contemporary works – Chagall, Dali, Matisse, when simple lines showed their power and contrasted sharply with the intricately detailed work throughout the rest of the Vatican museums. Opposite a Dali painting, we watched a tourist’s backpack scrape right across a 1944 Pedro Cano painting as the guy was clamoring for a photo of Dali. Both of us reflexively put our hands over our mouths and gasped… and then realized with shock that this must happen constantly.

Because, here’s the thing… There are SO MANY PEOPLE visiting the Vatican. You literally get shuffled along in this horde of people, so there is never, say, a room where you can stroll around and look at the artwork. Oh no, there is such a dense crowd everywhere that you almost need to let yourself be pushed with the tide, or else make your way through it as though it were 2:00am in a packed nightclub.

Anyhow… onto the masterpiece that is the Sistene Chapel. There is so much happening and so much detail, yet it somehow has a sweet simplicity. The ceilings obviously are stunning (I really liked Adam and Eve taking the apple from the snake), and the painted curtains and walls are pretty impressive as well.

The walls are stories of Moses and Jesus painted by Pietro Perugino, and the ceiling is (obviously) Michelangelo’s depiction of Genesis. Apparently Michelangelo painted nudes in the last judgment to represent purity. But, like a typical artist, Michelangelo refused when a pope wanted them covered, so another artist was asked to add coverings. Our guide also said that the pope didn’t pay the materials cost for the ceiling, so it’s less rich in color than the last judgment, where the church paid so they were able to use lapis lazuli blues.

Next, we got pushed with the crowds toward St. Peter’s Basilica, the largest church in the world. The Catholics are modest enough to point this fact out with plaques on the floor indicating the relative size of other large cathedrals, including shrimps like the Notre Dame (apparently #2).

A clear highlight was Michelangelo’s Piety, sculpted when he was 24 years old (in case you wanted to feel like you haven’t accomplished enough in life). Our guide said that “Michelangelo was the first to create beauty and precision as well as the Romans and Greeks” (1500 years prior). We saw John Paul 2nd’s tomb, a Raphael painting, etc.

The Pope (how much do I love Francis, let me count the ways…) was in the house, but we were unable to actually catch a glimpse. On a related note, we heard from several people that the number of visitors to the Vatican, and to Rome in general, has increased dramatically since Pope Francis came in.

On recommendations, we decided to pay an extra €5 to climb a 550-step circular stair-master to see the views at the top of the cupola. You could pay an extra few euros and take an elevator halfway up, but either way you still have to huff it – so you might as well do it all. The stairwell itself gets narrower as you go up, making us wonder if it would even be allowed in America or if it would be in some way implicitly discriminatory against obese people because after a certain girth, you simply could not fit.

Overall, it was totally worthwhile adventure… there were beautiful views over Roma from the top, and the building itself was interesting from that angle. Taking a couple of photos on one of the landings, we met a Texan couple who decided to make their 35th wedding anniversary into a Christian pilgrimage. We were torn whether to react as jaded agnostics or think it’s sweet and inspiring.

After lunch at La Vittoria – which is a 5 minute walk away from the Vatican and had great food – we met up with Marta, who is an art historian / tour guide who spent the remainder of the afternoon giving us and Mitch’s parents a private tour.

We met Marta by the obelisk in St. Peter’s Square. The obelisk – one of 13 or so ancient Egyptian obelisks – was apparently brought here when Egypt was under Rome’s rule as a gift from Cleopatra to Julius. Because of papal superstitions, there is effectively an incantation on the base, which is kind of hilarious.

Being on a private tour (more on it all later) was fantastic not just for the access to information and expertise, but also because a good guide is able to answer your questions and use them as a launching off point to figure out what information you would find interesting.

For example, apparently the Vatican’s name comes from Vattaca, the god of death, as this is the site where Nero killed St. Peter. And in the older history of this specific area, back in the day, I think that the Vatican side of the river was Etruscan, then conquered by Romans, and St. Peter’s cathedral was originally built here around 300 AD but was rebuilt later.

It was also interesting hearing Marta speak about Catholicism and the political power of the Catholic church. Looking back toward the beginning of Christianity, there were three major churches – the Roman Catholic, Greek Orthodox, and Egyptian Coptic. Roman Catholicism blends many pagan elements – as the people here were Roman (read: pagan), following a Christian religion. It’s fascinating to think about some of the ceremony and ritual in that light.

St. Peter may have been the “first pope,” but it wasn’t until around the year 700 that the pope became the leader of Rome. We didn’t realize that the pope didn’t stop being the political leader until the 1870s with unification – an incredibly long stretch of time for a political seat (of any type) to maintain power. Things seemed to have been a bit nebulous until 1929, at which point the Vatican became its own sovereign nation with the pope as its king.

Which brings us to a closing thought… spending a few hours at the Vatican was fantastic to see an outrageous collection of art and understand more about the history of the Catholic church and of Rome – and really of the whole world. But at the same time, instead of making us “like” the church, it left us with the lingering perspective of the Catholic church as a political entity more than anything else.

Here is the full set of photos from the Vatican… feel free to flip through them as a slideshow. We hope you enjoy these, and we look forward to posting about Rome soon!