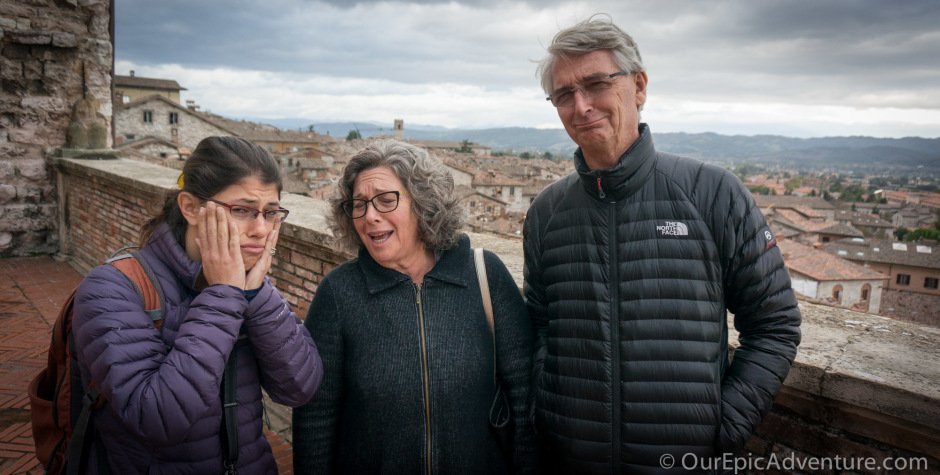 The Bates Motel… and our Salvation

We had a memorable (the good, bad, ugly, old, beautiful, you name it) last few days in Umbria. Thankfully, the initial experience opened up the door for us to see a few amazing places. And we were reminded that the most challenging situations are often the best opportunities we have to practice patience (we need more practice).

The original plan with Amy and Michael (Mitch’s parents) was to stay two weeks in Umbria, with the first week based at Pianciano near Spoleto and the second week based at Vaccaria near Gubbio. After a lovely week at Pianciano, exploring the hill towns in the surrounding area, we were excited for our next stop.

The worst night of our trip

There, we had a bit of a kerfuffle. By which we mean – worst night of our 12-month trip, and possibly the most incensed either of us have ever been in our lives. We won’t go into the gritty of it at this point, but the short story is that Vaccaria promotes itself by saying that the couple who run it are focused on vegan diets, teach yoga, are reiki masters, etc. And while those things are true, they are also super aggressive in their politics (so liberal and conspiracy-theory-based to make us look hyper conservative) and ass-backwards fundamentalist views on homosexuality and gender roles. Plus the house was freezing (they refused to turn on the heat so we kept our down jackets on), and the furnishings were a weird mix of drab antiques and uninviting lighting, and they claimed to have spent 30 hours prepping two rooms for occupancy at a B&B. Yeah, weird….

We had arrived at Vaccaria at 4:30pm for what we thought was going to be a blissed-out-vegan-yoga-reiki 8 days, went to bed quaking with rage by 11pm (and consequently didn’t sleep), had our bags packed by 7am, and with the owners’ agreement that we were not the right fit, were on the road by 8am.

We drove to Gubbio, 15 minutes away, and walked around for 10 minutes, saw a church and a pretty view, and had breakfast while we made a game plan. It was a bit unfortunate because Gubbio is supposed to be a really pretty and inviting town, and even our few minutes there showcased how lovely it was. However, we were so tired and still letting the rage-quakes settle down that we barely appreciated it and just took a couple of obligatory photos and let out a couple of obligatory ooh’s and ahh’s.

After a lot of assessment and deliberation, we came up with a game plan. We decided that our Bates Motel experience was the universe telling us that we should get the hell out of Umbria and head to Tuscany, but then we realized that we wanted to detour to Assisi first.

A stay in Umbria is not complete without visiting Assisi, famous as the birthplace of St. Francis (founder of the Franciscan order). People rave about it for its adorable back roads and incredible views from the sides of the mountain, which means that appreciation of said beauty happens after you get away from the throng of tourists in the crowded central piazzas.

To note, thanks to the touristy-ness of Assisi, there was this guy who may have been the best living statue we have ever seen. (With our penchant for street art and street artists, that says a lot!) What is more – instead of just being a standard living statue, when you tip him, he gives cute (non-religious) sayings on little pieces of paper.

A lot of the accommodations around town were booked up last-minute, but we found a room at the Case Brizi B&B for the night, conveniently located in the middle of town. The B&B is managed by Rita and Roberto, an awesome couple that is warm, welcoming, and super on top of everything. The rooms are well put together, totally lovely, and the breakfast is great. All of this is to say… it was a huge sigh of relief to be there instead of back at the Bates….

Plus, when we were super exhausted from not sleeping the night before and didn’t want to go far for dinner, we decided just to go to the restaurant right next door. Which was surprisingly excellent. Another great Italian meal… and more proof that I am powerless over Italian cuisine!

We were also able to use our relaxed night to finalize plans to spend the following 6 nights at Casa Moricciani in the little Tuscan village of Castlemuzio. (More on that in the next blog post… but suffice to say, ahhh-mazing!)

The next day, we spent a few hours wandering around Assisi. We stopped at St Rufino Cathedral, built in the year 1140. Apparently St. Francis used to pray in the crypt area there. Pause there… 1140. It’s mind-boggling. Can you imagine what life was like then, and then think about St. Francis praying in the crypt of this church. And then realize that you are standing in that church. Crazy.

We also stopped by Santa Maria delle Rose, an amazing modern art exhibit oriented around the power of the Virgin Mary. They made tons of these modern little sculptures of her, which (from different angles) represent many aspects of her. They are presented in an elemental way (how very hippie of the artists). They are carved in 33 woods in glass watery tubes coming out of dirt bases, with a thing in the center where you can hold porcelain versions of the little Mary’s. The little models are quite simple and beautiful. But perhaps the neatest thing is that they fit perfectly and comfortably into the curvature of the hand. (They should train Thai massage therapists on these things.)

Our last stop in Assisi was – of course – St. Francesco’s Basilica, built in the 1200s and swarmed with intense crowds. There is a lower cathedral and an upper one. The upper one is completely covered in frescoes. In many cathedrals and churches, you see some little remnants of frescoes on walls and columns, and you have to wonder what it must have looked like completely covered. Here you get to see it – and the effect is magnificent.

In the lower chapel, there are intricate stone inlays on all the walls and really neat friezes. In both the upper and lower chapels, there are fantastically intricate stained glass. And from the lower chapel, you are able to go downstairs to the crypt of St. Francis. The crypt was really neat and absolutely worth waiting in line to check it out… St. Francis lived 1182 – 1226, and it’s remarkable to think how much he did and changed the religion during those 44 years. (It’s humbling to realize how much we are all messing around and wasting our time!)

Around lunchtime, we left Assisi and drove a half hour to Deruta to spend the afternoon before leaving Umbria for Tuscany. Deruta is famous as THE home of ceramics, and packed to the gills with incredible old-style Italian ceramics (dishes, pitchers, service items, décor items) as well as some neat modern stuff.

We had lunch at Taverna del Gusto, where the antipasti was exceptional and the main courses decent. Then we wandered around the main piazza to look at ceramics shops, although a surprising number of them were closed for a Saturday afternoon.

Our favorite was Marianna at Ceramiche Andrilia (website and email here), who is this sweet and humble woman who was painting in the back of the shop while her daughter did her homework. She took a few minutes to talk with us in broken English (my Spanish-Italian translation method was remarkably helpful). It was interesting to hear about this as the family business; in the shop, the traditional designs were typically her mother’s, and the more new designs were typically her own work.

On our departure from Umbria, we were walking around outside of the historical center of Deruta, and saw these two dogs lounging in someone’s yard.

Here’s the full set of photos from this post… enjoy!