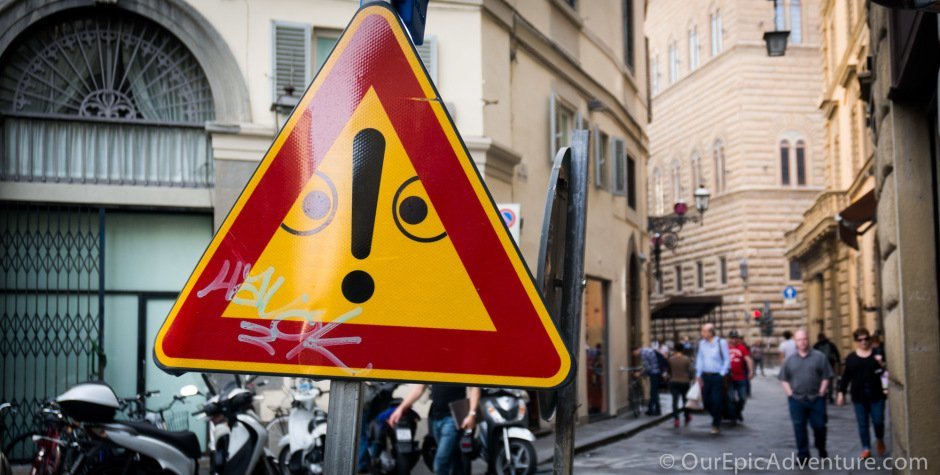 Benvenuto a Italia! Or, 48 hours in Firenze!

I may have been dreaming about my first day in Italy for a lifetime – home of pasta, tiramisu, and damned good red wines. Our first 2 days in Italia we spent in Firenze (aka Florence to us English-speakers), which did not disappoint. We spent most of our time just wandering around with a few stops by some of the tourist (and non-tourist) spots.

We arrived via air from France (significantly cheaper, and obviously much faster than taking the train). We had arranged to stay in an AirBnb room, which was super adorable and hosted by an awesome young couple – who are both finishing their PhD’s and share many of our interests in social justice, transportation, and the local food movement. When we got in, late in the evening, our hosts recommended where we could pick up a takeaway pizza for dinner, and we stayed in and chatted with them.

The next morning, we woke up for our first day in Italia! We went out walking, bought some grapes and apples at a farmer’s market, and were immediately impressed by the Italian people (especially coming from France). We stopped in to check out the Central Market, which is beautiful (full of gorgeous produce, cheeses, and other edibles) despite an apparent Italian obsession with tripe.

Our first taste of Italian food, in Italy

For lunch, we went to the Trattoria de Mario right near the Central Market, recommended by our hosts. It was super delicious and our first (of many) chance to eat Italian pasta. The only issue is that they fill up so if you don’t get there at 11:45am (which we did), you will face a huge line to get in. We were seated next to a lovely couple from Ohio, John and Cathy, who were great people to share a meal with. For dessert, we took our hosts’ recommendation and went to Carabe Gelato – phenomenal.

Checking out the churches

The biggest tourist show in town is the cathedral (or duomo), so we of course went to check it out. It is enormous and grandiose, and worth checking out the outside and inside. From the outside, the green marble designs were fantastic. And from the inside, we loved these nifty candle tree things.

After the duomo, we continued our wanderings. In some ways, the architecture and urban layout reminded us of South America, which meant we felt comfortable and at-home pretty quickly. We decided to pop into another church where they have daily free/donation organ concerts, which was super beautiful.

After our India-to-Europe culture shock and some of our French running around, it was really lovely to quietly and meditatively sit in the church. The sound of the organ is so rich and gives the air such a quality of fullness that it becomes easy to relax your mind and be fully present. There’s no time and no place where a bit of meditation doesn’t help.

Across the river toward the Giardino di Boboli

After listening to the organ music, we decided to look in our guidebook for an afternoon activity, and decided to take a slow and meandering walk across the river toward the Giardino di Boboli. En route, we wandered by some of the fountains and piazzas around town, which are destinations in their own rights. Then over one of the bridges, which views of the river and (you guessed it) the other bridges that connect the two sides of the city.

Later that afternoon, we went to the Giardino di Boboli on the other side of the river, which was pretty and enjoyable. Apparently a recent tornado / hailstorm had caused some damage, and there were signs up that a “small portion” of the gardens were closed. When we actually got inside and saw which pathways were closed, it seemed that “over half” of the gardens were closed. Lucky for us, some previous visitors had opened some of the barriers so we could easily access and enjoy most areas.

The gardens were really pretty – with manicured gardens and hedgerows, tons of sculptures, fountains, ponds, stairs, and hidden walkways. Plus, of course, the obligatory orange and lemon trees that were historically on the property of all wealthy families, and a heron that wisely realized that the sculptors of one of the central fountains had created a perfect place for a bird but forgot to actually put in the bird! So our heron friend dutifully stood in his space in perfect stillness for a while, while the visitors tried to decide if he was real or sculpted (until he decided it was time to take off). Our tickets also allowed us entry into the Costume Gallery, where it was fun to see some of the older clothing but we didn’t quite understand how it was curated.

We hadn’t figured out a restaurant for dinner, so we went to a random place near the Central Market, Da Garibardi. The food was good, but the waiters had a lousy attitude. We have since gotten used to Italian restaurants charging a cover fee, refusing to give tap water, not volunteering bread, etc. But this place unfortunately didn’t have a friendly and welcoming attitude to match the quality of the food, and felt like they just wanted to make a buck off the tourists.

The next morning, we went to the Bargello National Museum. The building was built in the 1200’s, has a rich history (including housing a prison at one point), and is itself as magnificent as the collections it houses.

They have a bunch of Michelangelo and Donatello sculptures – along with many of non-teenage-mutant-ninja-turtle-masters – that are so realistic they look like they could come to life. If you look closely at the arms, for example, you’ll see such detail in the musculature and veins that you can almost imagine blood somehow creating a pulse in the marble.

We had heard about Il Vegetariano, which proved to be a great lunch spot. It’s a semi-self-service restaurant with a wide variety of delicious vegetarian options in a homey atmosphere and a welcoming vibe. After a bit more wandering, Mitch decided he couldn’t resist a tiny sandwich, because Italy is nothing if not the country of food.

After a chill afternoon in the apartment, we went out in search of dinner. We had been smart enough to get recommendations and mark our map – but unfortunately most of our pre-planned options were closed or not properly placed on Google Maps.

We ended up going to Acqua al 2 Restaurant, which was definitely not traditional (with locations in DC and San Diego). But it was a nice option, and they had this sort of sampler-menu option, where we were able to have 5 pastas and 4 desserts at a reasonable price. Definitely not the best of Italian food, but quite decent and I think will be worth checking out their U.S. branches.

We couldn’t decide between three rounds of bonus photos for this post… so we will start with a few self-conscious sculptures.  I was so amused by the 1950’s pinup expression on the face of a statue in the Boboli Gardens that I couldn’t help but imitate him.  And we loved how a perspective shift on some of the nudes caused them to gracefully cover up.

Firenze is known for a wide array of centuries-old artwork — paintings, sculpture, and architecture giving a glimpse into many old masters.  But we were also impressed by the street art, where contemporary artists added levity to street signs and street scenes.  Not only do Florentines make mundane street signs into art now, but it seems like that tradition started centuries ago by turning hooks for tethering horses into happy little creatures.

Lastly, we need to give a little lip service to selfie-sticks. What is a selfie-stick, you may ask? This may have already hit tourist centers elsewhere, but we first saw them in Italy. Street vendors target tourists for these sticks, which you can put your smartphone on to take selfies like a little arm-extender. Which means that there are some hilarious sights of people taking selfies and group selfies in front of whatever they can, and using them in all sorts of creative ways. Go go gadget arm!

We may not have bought a selfie-stick ourselves, but you may enjoy our photos nonetheless… Here’s the full set of our photos from Firenze!