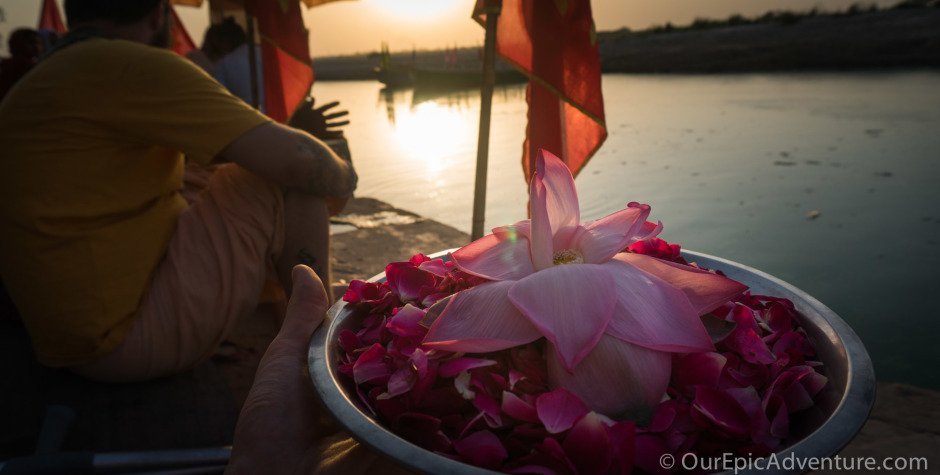 Krishna (the Hindu god) was born in Mathura and grew up a few kilometers away in Vrindavan, where the locals talk about the romps of Krishna, Radha, and other members of the Hindu pantheon like old friends.  Two of our friends from Rishikesh Yog Peeth live at an ashram in Vrindavan, and we were excited to go for a short visit.

From Agra (where the Taj Mahal is located), we took the train to Mathura, 45 minutes away. We bought cheaper second class seats and weren’t sure what we were getting into, but we were excited to find out that the seating was totally comfy, and the stupid packed areas we saw were the unreserved seating. From Mathura, it was a ½ hour (at top speed) rickshaw ride to Vrindavan. We arrived exhausted after our stupid long day in Agra, and were so grateful that our friend had arranged a room for us to pass out in.

Our friends who live there are Vishvarup and Ramesvari (or Vish and Rame for short). Vish unfortunately had to deal with a visa issue and go to Nepal for a few days – because Indian visas are always a hassle for everyone – but Rame was an amazing and super gracious host for our time there.

The next morning, we slept in and then Rame came and fetched us from our room at breakfast time, which was super helpful because we had no idea where we were. Then we had breakfast at their ashram, called Vrinda Kunj, where there are mostly Latin American devotees and the common language is mostly Spanish, with a little Portuguese, English, and Hindi thrown in.

A few general notes. Vrindavan is the town where Krishna grew up and is a center for bhakti yoga – bhakti is the yoga of devotion, and involves a lot of chanting and dancing, and in the U.S. is growing as more and more people get excited about kirtan (which we love). Vrindavan is also the headquarters of ISKCON, or the International Society of Krishna Consciousness, which would be easiest understood to Americans as the Hare Krishnas (although most devotees in Vrindavan would probably be considered Hare Krishnas by most Americans).

Here, instead of any other form of “hello” (as well as goodbye, thank you, etc.) people say things like “Radhe Radhe.” And on all the buildings, “Sri Radhe” or “Radhe Krishna” are painted. Radha is Krishna’s consort, so the gatekeeper to Krishna in a way.

Also, the monkeys are far more mischievous in Vrindavan… elsewhere, you need to be cautious walking around carrying food lest the monkeys steal your food. Here, they have a particular penchant for stealing eyeglasses, just because they know it makes humans nuts (thankfully they haven’t realized stealing smartphones and cameras does the same). Rame warned us to take our glasses off while walking around, and we only semi-believed her until Mitch saw some dude’s glasses being stolen off his face our first morning here. The legend has it that the monkeys here are extra-frisky thanks to Krishna, who taught them how to steal.

Anyhow, after breakfast our first day, following tradition, we stopped by the Gopeshvara Mahadev, the Siva Temple. There, we made a (heavily ritualized) offering and get Siva’s blessing before exploring the town. Thank goodness Rame and one of her friends helped us navigate the process of leaving flowers, pouring milk, etc. I had brought my last hoop with me to Vrindavan and intended to find young children to gift it to, but accidentally left it in the Siva temple and it was gone when I came back, so I guess Siva wanted it instead.

Then we stopped by the Hanuman Temple and the LalaBabu Temple, then Brahma Kund, a huge fountain/pool with Brahma in the middle. Of course, each temple is accompanied by stories of what happened at each site. There are hundreds – literally – of temples here, and they each have a special story of their history.

Next we went to the Rangaji Temple, where the entrance is characterized by these huge white carved tops which are reminiscent of stupas. Inside, there are a bunch of different rooms and courtyards, with these gorgeous carved columns all over.

Then we took a rickshaw to Kusum Sarovar; it’s a half hour ride away and a pretty magical spot. We took some yoga photos, wandered around, and had a little run-in with a fierce banana-stealing monkey (a big male).

In the early evening, we walked to a bank of the Yamuna River for a sunset puja. It was honestly one of our highlights. The puja has been done every single evening – probably for centuries – and is run by a Brahmin family, which has probably been conducting this puja every evening… for centuries. It was particularly interesting to be involved with the ceremony, throwing flowers, pouring milk, lowering candles, throwing balls of dough, waving fire, etc. to the river in a prescribed order. When we were confused about what to do with each random object they handed us, some older Hindu lady was on hand to demonstrate to us.

Then back to the ISKCON temple for kirtan (chanting) and to walk around. We knew that the Siva tree in Tompkins Square Park (a block away from our apartment in New York) was involved with their history, but we didn’t realize that it actually began at that tree in 1966.

Before passing out for the night, we made one last temple stop at the Radha Ramana Temple for darshan.

The next morning we woke up and headed over to Vrinda Kunj ashram for kirtan, philosophy lecture, and breakfast. It is interesting to get a little peek at our friends’ ashram culture. Many of the men and women are brachmacharya (practicing celibacy) so they sit separately, and almost everyone wears traditional clothing.

In particular, Jen and Jewels fell in love with the gopi skirts that the women at Rame and Vish’s ashram wear. They are so stunning! And while I like the sari-look, I didn’t really have the urge to actually buy one and wear it myself. The gopi skirts were another story altogether… we made Rame take us out on a shopping expedition, which was by far my favorite (and most fruitful) shopping excursion for myself in India.

Then we caught a rickshaw to Mathura and we got general/unreserved train tickets to Delhi. On Rame’s recommendation, we sat in the sleeper car (one class up from unreserved) and were planning to pay extra to upgrade if they checked our tickets on board. We got a surprisingly friendly welcome from a Jainist family whose seats we stole (a reminder to be welcoming always), who even shared their delicious fresh guava with us. And we met a super friendly mechanical engineer from Agra who lives in Delhi, who sat with us and actually brought us back to our hotel area in Delhi.

Indian culture does a beautiful job of making people feel welcome to join… whether in their ceremonies and rituals, for a meal, or to share a seat on a train. It’s a good reminder and something we need to keep with us.

Here’s a full collection of our photos from our time in Vrindavan. As usual, feel free to click on one and scroll through them slideshow-style.