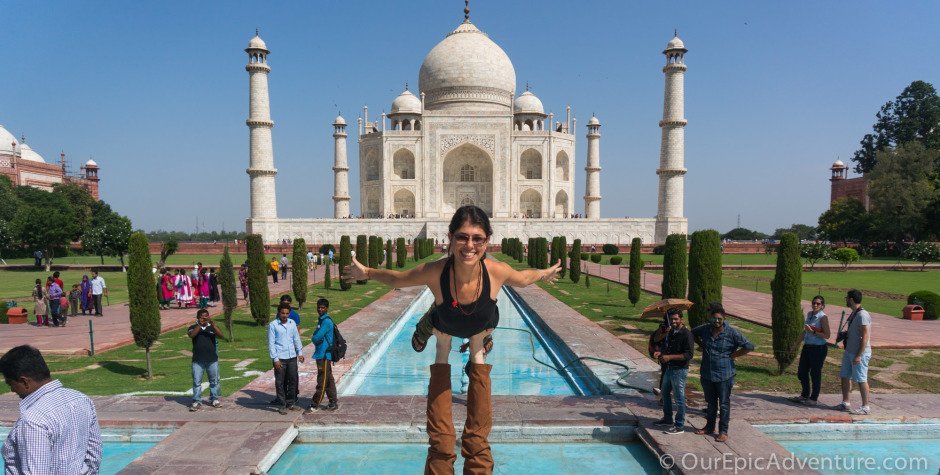 Everyone says that despite it being a tourist destination, the Taj Mahal is a must-see. They’re right. It’s absolutely beautiful… your first sight of it is enough to make you want to cry, and the enormity and grandeur of it is stunning.

We decided to spend just one day in Agra (the city where the Taj Mahal is), so we
woke up at 4-something am in Delhi, left our bags at the hotel, and walked to the New Delhi train station for the 6am express train to Agra (which is only 2 hours long, and cost Rs 600, or $10 USD for fancy tickets). The train ride was really interesting. We passed by enormous slums and had a peek of that sort of life in India, which was like nothing we had ever seen before… People living in these huts with plastic tarp/bag roof and walls, and a massive trash dump surrounding it. Scattered on the trash dump were men squatting for their morning rituals, and then apart there was an area where women and children were squatting.

People created homes with whatever materials they had available – tarps, heavy duty trash bags, scraps of cardboard, plastic, metal.  Under one overpass, there was a community that was effectively cubicles with walls but no roofs:  there was no need for roofs since the whole thing was covered by an overpass.  In some slums, we saw satellite dishes, which is extra remarkable because it indicates that some people here might be able to afford to live elsewhere but choose to live in the slums.  Some were filthy, some were remarkably neat.  And it was extra-fascinating to us in light of our experiences camping and setting up temporary homes for a week or two at Burning Man and other temporary events.

Further on there were beautiful fields, also full of people having their morning squat (but with a much more beautiful toilet view). There were people working away, as usual hauling giant loads of grasses on their backs or via donkey.

When we reached Agra, we got train tickets for the evening to continue our journey onward to Mathura. It was a fascinating process of Indian men pushing past us to get to the front of the line, and of course the requisite cow in the ticket office.

Then we hired a prepaid rickshaw for the full day (Rs 600, or $10 USD), which seemed like a great idea at the beginning of the day, but we ended up really unhappy with the experience. The driver seemed lovely at first, but he became a bit of a brat by lunchtime and throughout the afternoon (more on that later), and then at the end of the day effectively pushed so hard for a tip that we felt really bad about it and gave him Rs 100 extra, which we really shouldn’t have done because he didn’t deserve it.

Anyhow. Stop one in Agra was Taj Mahal. We expected it to be jam-packed with tourists, which it wasn’t yet when we arrived in the morning. (Note: Go early. We got there at maybe 9:30am and it was still early enough that it wasn’t crowded until we were leaving around noon).

Your first sight of the Taj Mahal, seriously, is beautiful enough to make you want to cry. There are few words for it… It’s an exercise in perfection in symmetry, and it is absolutely stunning. And definitely worth the trip.

It was built over 30 years by this 16th century Shah as a mausoleum for his wife who died in childbirth with their 14th child. Unfortunately for him, he was overthrown by a son (I guess he should have focused more on being a good leader and less on building the Taj?) soon after it was completed, and spent the rest of his life imprisoned in Agra Fort where he could only just see the masterpiece from a window.

Then our rickshaw driver brought us to a super overpriced restaurant for lunch, by which point we were too hungry to go someplace different, and then indicated that we should buy him lunch. (Clearly, we didn’t.) The sensibility of demanding money from tourists is quite infuriating. In the toilet area, there was a guy who wouldn’t let us turn on the faucet to wash our own hands, and then pushed the tip box under our faces and effectively molested us until we threw in Rs 10; it was extra annoying because he didn’t push the tip box at Indian tourists.

After lunch, we went to the Agra Fort, which was really magnificent and worth checking out. Mitch and Jen took a nap on the lawn before we explored; it was pretty impressive to see them both out cold.

Agra Fort is a huge and vastly impressive structure, the old seat of power for the whole empire. The detail is exquisite, even more so than at the Taj Mahal, where the detail is eclipsed by the whole. The array of rooms and areas – fortress components (crocodile-infested moat and all), palace rooms, mosques, harem areas, public meeting areas, etc. was mad impressive.

In the afternoon, our rickshaw driver seemed pissy that we spent longer in the attractions instead of shopping, and then insisted that we make a few shopping stops. When he brought us to his friends’ expensive shops, he was really pushy about asking us why we didn’t buy anything.

When we say the shops were expensive, we are talking $1,000 (dollar!) marble tables, and $500 gemstone rings. We’re not sure if they had some crazy misperception that we could spend that much money on nonsense at the drop of a hat, but the rickshaw driver and shop owners were super pushy about it and made us all quite uncomfortable. But, it was pretty neat to check out the marble inlay process, possibly even worth the minor irritation of dealing with the rickshaw driver!

As usual, here is a full collection of photos from our day in Agra. Feel free to click on one and then scroll through them slide show style. =)