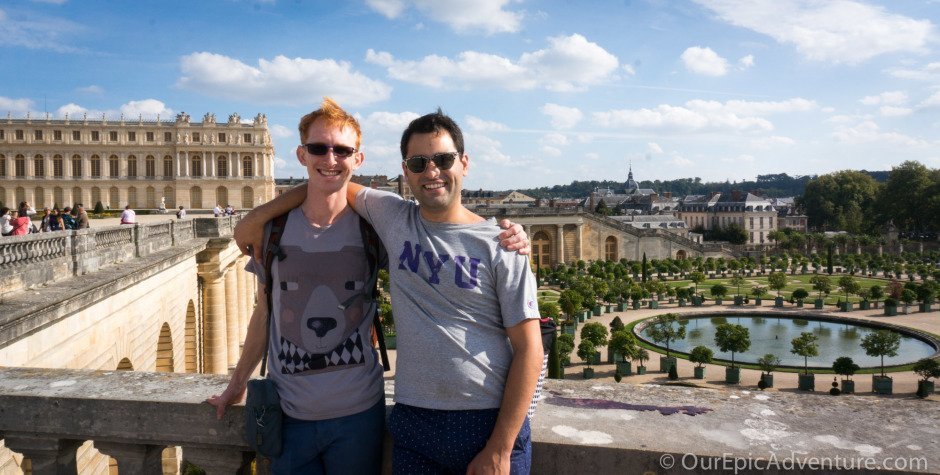 Paris: A Week of Baguettes and Butter

After 11 months on the road, Paris was full of culture-shock and sticker-shock, with a healthy (and then some) dose of fresh baguettes and butter, and lots of time with friends. We hit a couple of major tourist attractions, but we had both been to Paris before and were happy to enjoy a more relaxed pace.

We stayed with our friends Marc and David who live in a beautiful little apartment in Le Marais. Marc is one of Mitch’s besties from college and was one of the groomsmen at our wedding last year, and he and his (French) beau David got married after a 2-year cross-Atlantic relationship. Marc was still waiting on all of his French paperwork to finalize, so he was not allowed to get a job yet – the upside for us is that we had a personal tour guide!

We arrived in Paris on a Thursday morning and took a nap at Marc and David’s apartment. Then, reeling from serious culture shock, we met up with our friend Didi for lunch. We had met Didi in India doing yoga training, and were super excited to spend time with her in Paris. After lunch, the three of us wandered, inadvertently hitting (and taking yoga photos in, of course) some of the Paris landmarks like along the banks of the Seine and in front of Notre Dame.

Then the two of us walked around a bit more, checking out the neighborhood, dealing with culture shock, jet lag, and the redeye flight, and enjoying public plazas and glorious early autumn weather.

We had heard that there was a burner happy hour our first night in Paris, so we decided to keep ourselves awake to check it out. It was nice and low key in the early hours, and we had a special treat seeing some of our friends from home featured in the Burning Man photo slideshow at the event (between photos of them, photos by them, or photos of artwork they created). We were super excited to see our friend Sophie there too, but were so exhausted after all the travel that we headed back to the apartment reasonably early to rest.

Friday we had a picnic lunch at a park just outside the Paris city limits and not much else. Jewels seemed to have landed in Paris with a bit of a cold and was feeling a bit ill, and we both were pretty-shell-shocked from the cultural differences so we took it easy that day.

The Gardens of Versailles

The next day, the four of us (Jewels, Mitch, Marc, and David) took a daytrip to the Versailles gardens. It’s a 30-45 minute train ride outside of the city, and an exercise in excess. The gardens have phenomenal detail and care… Each is intended almost to be a room, creating a range of over-the-top opulent environments. It was interesting to go between the “rooms” and see which areas were perfectly manicured and which were a bit more natural – and we were surprised that it was not even more manicured than it was. There are an excessive number of museum-quality sculptures which were a total treat to find each time we rounded a hedgerow.

The fountains are a world unto themselves. Marc was super excited about them, so we did a whirlwind tour to catch many of them while they were on, which is for a limited time each day. There is a wide variety among the fountains, including one that shot water in a choreographed synchronized swimming style show to arias playing on loudspeaker. The whole experience was pretty spectacular and we’re glad we went, although we were fine not going inside Versailles castle on this trip.

Adjusting to the French lifestyle

After a few months in India developing a healthy lifestyle with early bedtimes, early rising, clean vegetarian foods, and no alcohol, Paris was a bit of a shock to the system. Our sleep schedule totally shifted: in India, we were usually asleep by 10pm and up around 5am, and in Paris, we were up until 1am every night and the sun didn’t rise until after 8am.

And while we have zero complaints about warm crusty baguettes, pungent cheeses, and fresh butter, Parisians didn’t always understand why we asked for vegetarian options on a menu, and our bellies were a bit troubled by the extreme cheese-butter-input. We were so grateful that Marc (normally one of our most meat-oriented friends) sympathized with our need for vegetables and is an amazing chef to boot.

On Sunday morning we woke up late and then rushed out to buy some food things. Everything in Paris – except restaurants and museums – shuts down on Sundays. Some are open until 1pm, so there are Soviet-style lines out the fruit shops and boulangeries lest the French not have fresh baguettes for a day. (To note, we always thought the French valued wine and cheese more than anything else. We were wrong… it’s baguettes!)

Then Didi came over and Marc made an American style Sunday brunch for the 5 of us – hash browns (I learned the secret to his delicious preparation… butter!), eggs, mimosas.

After brunch, we went for a walk around Le Marais, including some window shopping (and more Euro-sticker-shock) and exploring the gardens at the Archives.

We stopped back at the apartment in the late afternoon and found out (thanks to the wonders of Facebook) that our friend Anna from NYC had just moved to Paris for interpretation school for a year, and we were able to connect with her for dinner. It was great to catch up with her, but also an odd peek at what it will be like returning to the New York City Minute. Compared to our slowed-down pace, it was like Anna was on warp speed – eating, talking, zipping out for a smoke or to the bathroom.

Over the next few days the weather got chilly and drizzly, so we decided to take the hint and chill out. We went for local walks around Le Marais, checked out Paris’s open air sculpture garden, wandered around the two city islands, etc.

Jewels decided that her next trip to France needs to focus on Brittany and Normandy because the food there – crepes and cider! – are among her favorite things. A couple of crepe lunches in Paris (including a delicious one at Le Petite Breizh) and a couple of days in Brittany on this trip just whet my palate! To note – the traditional way to drink cider is out of a chilled little bowl! Who knew!

One day we were wandering around with Marc and didn’t have much time for a full tourist experience, so he suggested the Luxembourg Gardens, which were super gorgeous and wisely landscaped to maximize bloom and minimize effort with huge pools and lawns surrounded by changing flowerbeds. They had a sculpture exhibit of 20 kickass French queens, regents, legends, and other women from around 1100 until maybe 1700. The timescale of everything here is stunning and so specific with the individuals of royalty. It helped that Marc was able to narrate what we were seeing with flair and spicy backstories.

The other cool thing in the garden is the apple/pear orchard, which has been going for centuries in the old style, where the plants are forced into a planar vertical (like a genealogical table), low row, or circular format, and very carefully controlled. There is even a plaque and a name for the oldest plant, which lived 111 years and used to yield 200 kilos/year.

After a serious lack of yoga, we got a double-header. We went to a class with Didi (in French!), which was awesome. After spending 6 weeks with her in India, it was really interesting to see how she taught to her local audience. It was a mellow class (geared to older and less active people), but still felt great to move, and we were excited to see how much we could pick up without knowing any French (aside from about 20 key words and phrases). For yoga students and lovers in Paris, you can get Didi’s class info from her via Facebook here.

Then we headed to a 2-hour acroyoga class, which was super fun. It’s amazing that even without speaking a common language, as soon as we find the acro community, we are home. And it’s interesting to see how much we (in particular me, Jewels) have changed in our approach with acro over the past year of travel – releasing control, trusting, and going with the flow.

Mitch had a top quote of the evening… He volunteered up when they asked for someone to demonstrate flying star. Once he was in the pose, the teacher tried to say something to him, which he totally didn’t understand. And Mitch declared: “I don’t speak French, but I speak acro!”

On our last day in Paris, we went to the Louvre with Marc. We had both been to the outside on previous trips to Paris but had never actually gone in. It is absolutely phenomenal. The enormity of the collection is unparalleled, especially considering that many pieces have been in that collection and in that building since they were created 500 years ago. And the building itself – the details, paintings, sculpture that’s actually part of the building, is often just as impressive as the art itself.

It’s really interesting to see the masterpieces – not to actually see the masterpieces, but because the crowds around them are absurd. There are tons of people who flock to see the Mona Lisa, but no one actually knows anything about why it’s a special painting. So it’s just a mess of people who want to check their life list that they have seen the Mona Lisa, all craning and straining to get a photo of it. Meanwhile, in the same room there are paintings that are every bit as impressive that are virtually ignored. That said… both with and apart from the masterpieces, it really is a magnificent collection.

Outside of our favorite restaurant… that we never set foot inside. By the way, Le Schmuck’s menu featured a €19 ($25 USD) special “Schmuck Burger.” No really.

As usual, here’s the collection of photos from our time in Paris! Enjoy!