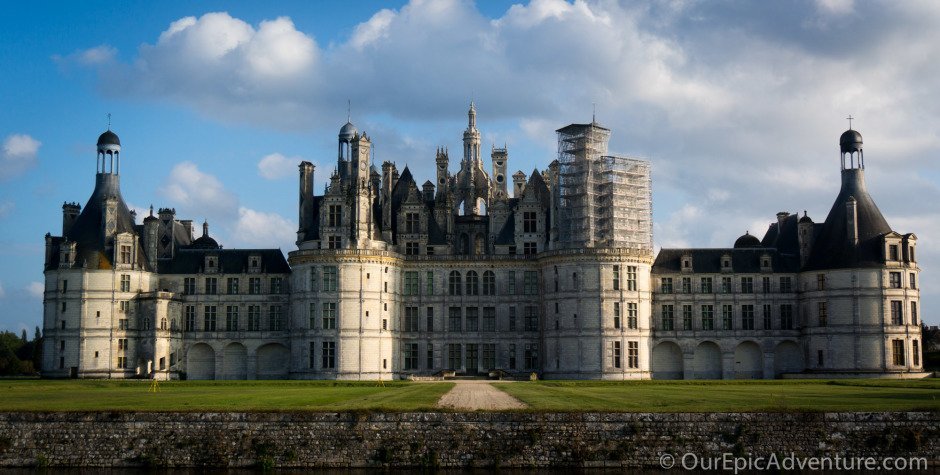 A drive by the castles of Loire

Our friend Sophie planned an amazing 4-day road trip during our time in France. Without knowing where we were going, we got into her car and headed off to the land of medieval fairy tale castles that are usually the stuff of myths.

Both of us had been to France before, but we had never been outside of Paris. Newsflash: from just a couple of days adventuring, the rest of France is amazing! We need to go back and explore some more.

The Loire Valley, just two hours outside of Paris, is a beautiful area… it has a lot of small villages, small(ish) cities, rural homes, farmland. From the car windows, we got to see some French cows chewing their curd so they could create French butter (priorities!), leaves spectacular in their autumnal hues, swans stretching their wings on rippling water (no, really), and the gorgeous vistas that you might expect in an oil painting reproduction in a mid-range hotel in the States.

Plus, of course, the castles. The Loire Valley is known for having about a million castles (okay, maybe a slight exaggeration), where something from the 1600’s might be considered “new.” Some of them were full-on castles, standard residences with defensive architecture, and some were created just as hunting houses in an exercise of over-the-top extravagance.

We drove through Blois, a very adorable city. Sophie had spent a few years working in the area, so she took us to a great little pizzeria. We were debating which castle to hit up first when the lady at the pizzeria said there was a sweet little castle just a 2 minute walk away (because why wouldn’t there be), so we decided to check out the Fougères Castle which dates back to the 15th century or so.

Because it was a very small castle (in comparison to some of the rest of the Loire Valley extravagance), there weren’t many tourists and we could just wander around and explore the inside and outside. We particularly enjoyed seeing the architectural construction of wooden building supports and medieval toilets. (The toilets were so neat! It seems that typical construction was to have a toilet seat as we know it on a little bench in a small room inside the house, but then they had planned the construction so that waste material would drop down through a hollow area in the wall of the castle into the moat or whatnot below.)

They also had an exhibit on fantasmagoria, which was super neat – effectively the “technological” (some lower tech and some higher tech) tools that people used to trick other people into believing in ghosts back in the day. There is also a French legend about the Dame en Blanche, which apparently has its roots in the Fougères Castle, which was neat to learn about. The castle is surrounded by a sweet little vegetable garden, which was lovely to wander through.

Then we drove to the Chambord Castle, which is full-on French Renaissance. It was apparently built over 30 years in the early 16th century to serve as a hunting castle for King Francis I (ie: it was expected to be the weekend home), but he decided it was too drafty and impractical (or whatever) and ultimately spent less than two months actually there. There is no wonder there was a French Revolution!

The castle is incredible, amazing. We didn’t actually go in because we got there too late in the day, but we were able to walk around the outside and grounds, and it was magnificent from that perspective. (Apparently the best part of seeing it is seeing the outside, but we cannot confirm or deny.) It’s huge and stunningly beautiful.

It has about a thousand turrets and towers of various types and a shocking array of different styles. Legend has it that some were designed by Leonardo da Vinci, but that’s apparently a source of hot debate. Taken as a whole, the roof of the castle is enough to make any steampunk-lover drool all over himself.

After our recent experiences seeing the beauty that symmetry can create with the Taj Mahal, the Chambord Castle feels like a hodgepodge of asymmetrical but still gorgeous things sticking up from every which direction, as though anytime there was a flat surface, its creators decided to design a nifty new thing to stick up.

As we were leaving Chambord, Google Maps told us that what we had expected to be a 3-hour drive might be 4 ½ instead, so we settled into the seats of the car to see the adorable-ness of the Loire Valley… Adorable houses, adorable villages, adorable farms, adorable swans, adorable sheep, adorable cows, adorable river, and an unbelievably beautiful sunset.

Here’s the set of photos from our day in the Loire Valley. Enjoy!