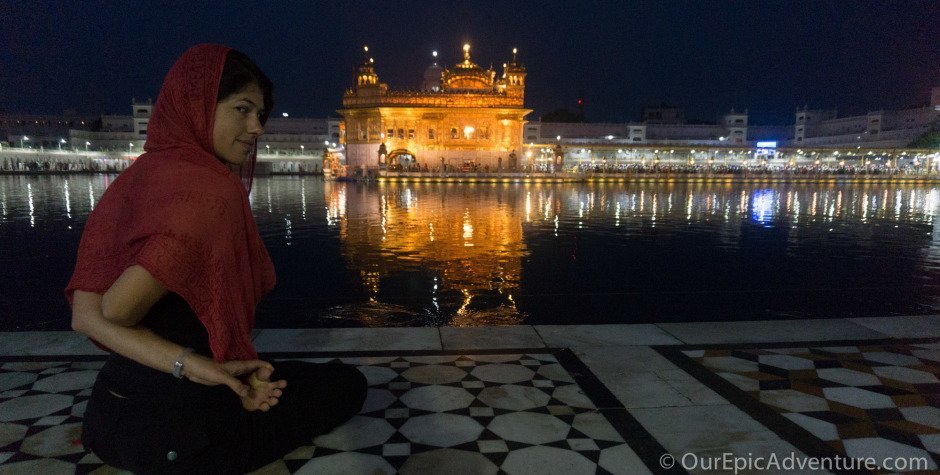 We had heard that it was worth a visit, so we traveled to Amritsar from Dharamsala. En route we passed through a lot of farmland and got a glimpse of a totally different side of India. It was interesting watching the landscape flatten out, an increasing number of turbans, water buffalo, and rice paddies. It felt oddly similar to our time in SE Asia, with hazy skies thanks to burning fields.

The bus from Mcleod Ganj to Amritsar via Pathankot took far longer than expected – it was 8+ hours of travel, where the second half the driver was super aggressive, maybe the most we had witnessed in our whole journey (now that’s saying something). On the way back, we took an early-morning taxi so we could make it in time for the briefing for teachings with His Holiness the Dalai Lama (more on that in our Dharamsala blog post), which took us 4 ½ hours. To note, taking a taxi from Dharamsala to Amritsar costs Rs 4,200, but from Amritsar to Dharamsala was Rs 3,000.

We were thinking about staying a night at the Niwas, a communal donation-based dorm at the Golden Temple, but after checking it out, we opted for a hotel instead. It’s supposed to be quite the experience and the people were super friendly, but we weren’t quite up for the experience of one long bed with a couple dozen people laying next to each other.

Amritsar is pricey for India, but we had heard online great things about Hotel Hong Kong Inn, and we decided to treat ourselves. The staff and value for price were exceptional. Our room was Rs 1,700 per night (about $28 USD) but super fancy. We were excited to be in a fancy splurge place for our anniversary and for a few nights. And the staff is super eager to help and do whatever they can to make you comfortable. One morning we asked if there was a place we could go for breakfast to get fruit since they don’t have any on the hotel menu, and they offered to send someone out for fruit and cut it up and bring it up to our room.

The Golden Temple and Our Introduction to Sikhism

Our first morning, we had breakfast near the Golden Temple then went in to check it all out and spent a few hours. It was a beautiful experience, washing our feet then entering the main gate and experiencing the temple, holy pool, surrounding areas filled with holy and historical things, and all of the people dipping and praying.  And while there were a ton of pilgrims (Sikhs from elsewhere who journeyed here to worship) and Indian tourists, there were surprisingly few westerners!

We definitely need to learn more about Sikhism – it’s very much about being warm and welcoming to all people, classes, nationalities, etc. But at the same time, it’s also very strict, people aren’t supposed to joke around, and it feels very militarized in a way. At the temple there is the Sikh museum, which is filled with paintings of a huge variety of ways that the Sikhs have been martyred, tortured, and massacred through the centuries.

A Peek of the City of Amritsar

After that, we walked around back alleys near the Golden Temple and explored residential / local Amritsar for a while, which was super interesting. The main areas of Amritsar feel like what we had imagined India to be – crazy piles of people, everyone grabbing at you, asking for money, etc. But the back streets were chill, run-down but lovely in a weird way, and people there seemed genuinely excited to see foreigners.

For lunch we had kulcha, apparently an Amritsari special which is veggies or whatever baked into a soft flat bread and served with a kind of chickpea daal. It is super tasty, but unfortunately one of the only easy food options in Amritsar and not the healthiest or most filling meals.

In the afternoon we went to the Pakastani-Indian border for their daily border closing, which is a total trip. We hired a rickshaw to take us round trip, which is an hour’s very bumpy drive away. It was awesome and surreal. The foreigners sit in this special VIP area, and the whole thing is effectively reminiscent of the way male birds show their manliness with absurdly flamboyant displays.

We couldn’t see the Pakistani side too well, but it was more mellow, less crowded, and more burqa’ed (maybe 10% of women) than the Indian side. On the Indian side, the pre-game and actual event were all hosted by a white-clad MC. First, women were given the opportunity to line up and run the Indian flag to the border and back (Indian women are not known for their swift or smooth running skills). Then there was a big Punjabi dance party where the women screwed and unscrewed lightbulbs to their hearts’ content… Amritsar is in the Punjab, famous for music that starts the shoulders bouncing.

Finally, the two militaries had a man on who could bellow for a really long time (into a mic held up by the white-clad MC). It was fully in the category of “you just can’t make this stuff up.” The next thing we know, military guys in funny hats walked, stomped, knee-raised, and high-kicked at each other in the most bizarre (yet completely synchronized between Pakistan and India) version of the Rockette’s auditions imaginable.

There was a dramatic lowering of the flags (in unison and highly coordinated, much like the high kicks, lest one flag get lowered faster than the other), a quick handshake, and the gates closed for the night. It is mind-blowing to think how many resources must go into having maintained this tradition since 1952, and daily since 1965, with literally thousands of spectators daily.

Being that it was our 1-year anniversary of our wedding, we (along with our friend Jen, who was our amazing travel buddy for a month) decided to go to a fancy dinner at Crystal near our hotel. It was amazing and ended with an epic brownie ice cream fudge sauce sizzling dish dessert. To note, there are two Crystal restaurants (there is some backstory about two brothers or some such) – we tried both and would recommend the one on Queen Road (the road the hotels are on) as better than the one around the corner.

Round Two at the Golden Temple

The next morning we woke up and left our hotel at 5:00 am to go to the Golden Temple. After the wake up, we cursed the alarm (and Jen for suggesting it) for making us wake up, but as soon as we got to the temple area, it was interesting to see tons of pilgrims lined up sleeping outside.

Once inside the gates just before dawn it was a magical place – you can tell why it’s considered blessed. The lights of the temple and reflection on the holy pool were magnificent.  (The holy pool is actually the root of the city’s name; Amrit means elixir or nectar, and Sar is short for sarovar, or lake.) We sat on the edge of the holy pool through sunrise, which wasn’t too amazing, but the morning light made the whole temple glitter. We also realized that the line into the temple itself was shorter in the early morning (maybe 45 minutes instead of 4 hours), so we decided to brave the line and check it out. It was just beautiful… Sometimes land feels so holy you have to close your eyes and just be there.

We had breakfast in the langur, a free/donation meal area in the temple complex where they serve apparently 60,000 free meals daily. Not only is the chai delicious, but it’s incredible how many services at the temple are free and public. It seems like a really positive element of Sikhism, and really inspiring to watch the hordes of people preparing the lunch meal.

We’ve mentioned in other blog posts about India that Indian people love having their photos taken with Mitch (and occasionally with Jewels, but Mitch is more unique here).  We started to take photos of the process at the Golden Temple — it was pretty amazing to experience people rotating in and out of the photos so that everyone in the family could have a turn, including Grandma.  Or a gaggle of kids come up and surround Mitch.  It was particularly surprising since we had to cover our heads at the Golden Temple, so they couldn’t even see Mitch’s orange (totally natural and un-henna’ed) hair!

This photo also deserves a special call-out.  Through our experiences in India and Nepal, we’ve been amazed to watch how much physical labor the women do.  You will see men literally shoveling dirt, rocks, concrete, bricks, etc., onto the head basket (or in Nepal, the bag that is carried with a headstrap) of a woman, much like you would for a donkey.  If we walk around together and Mitch is carrying a bag and Jewels isn’t, we sometimes imagine the locals are thinking: “why have a wife if the man is going to carry things for himself?”  To note:  the baskets in these photos were filled with gravel and cement.

In the afternoon we went to the Mata Temple, which was super awesome. It’s a trippy, Vegas-style version of a Hindu temple – with giant sculptures, mirrored walls, caves, water to wade through, etc. I love that the Hindu people don’t take themselves or their religion too seriously. I think that if a Hindu temple emerged in Vegas, Hindus would go there and be so excited that their religion was being displayed so brilliantly and with more bling than they can afford or dedicate to it in India.

One of the teachers at Tushita said that, if you trace back its very earliest roots, Hinduism actually evolved from ancient Greece (with many permutations) and we are thinking about the varieties of similarities. For example, the all-powerful entities of Zeus with his trident on Mt Olympus and Siva with his trident on Mt Kailash.

It is interesting to see how multicultural and accepting India is, and also to see how the multiculturalism enables people to hold onto their native culture, even in the same place. So for example, hello in Punjabi to a Sikh is Satsriakal (Sat means truth in Hindi and Sanskrit, and Sri Akal is one of their gurus or sages), but to a Hindu it is the regular greeting of Namaste (in Hindi). And even once we went to Delhi a few days later, it was really interesting to go into a shop, see that the proprietor is Sikh, say Satsriakal, and have them just beam a giant smile at us.

Here’s the full collection of photos from our time in and around Amritsar. As usual, feel free to click on one and then flip through the whole slideshow.