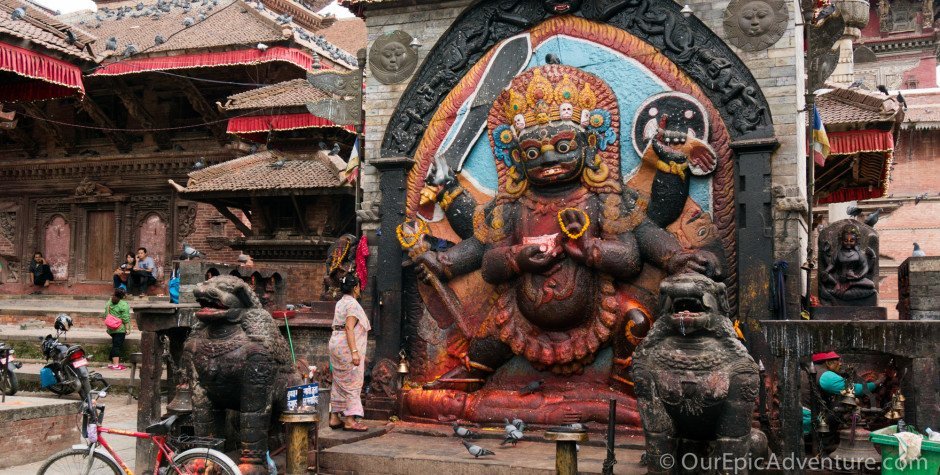 Kathmandu may be one of the ugliest cities we’ve seen – it’s filthy, crowded, and run-down – but it’s also an epicenter for people on spiritual quests. Here, religions are born, fused, and celebrated, and you can’t walk 20 feet without passing some temple, shrine, or sacred tree.

We spent two and a half weeks in Nepal in total. Because of logistics, limited time, and the rainy season (clouds blocking the views and leeches on the trekking trails), we decided to stay in and around the Kathmandu Valley. We didn’t spent too much time in Kathmandu proper… so in addition to this post, here’s more from our time in Kathmandu:

Patan: One of the other main historical cities in the Kathmandu Valley (20 minutes from Kathmandu proper), with incredible temples, public squares, and museums.

Boudha: A predominantly Buddhist area with a number of monasteries and the famous Boudha Stupa, a major Buddhist pilgrimage site. It’s about 20 minutes away from Kathmandu proper and was our homebase for our time in Nepal.

Pashupatinath: A large temple complex in between Kathmandu and Boudha, where we took enough photos of temples and monkeys to warrant its own blog post.

Kathmandu Valley Cultural Trek: We spent a few days with the intention of hiking between some of the various towns in the area and explored the area’s rural and religious heritage.

When we arrived in Kathmandu (at the airport, having flown in), we had a smooth customs and visa process, and then we got a cab into the city. We weren’t able to negotiate the cab for less than 600 rupees ($6 USD) but people said it can be done. We went to an area just outside of Thamel (the big tourist/backpacker center) and found a room for our first couple of nights.

We spent two nights at the Tibet Peace Guesthouse. Our room was $8 and we usually spent another $3-4 for our breakfasts. The room was a bit funky, but there was plenty of natural light and an actual view from the third floor. We had our own bathroom, although the toilet only semi-functionally flushed (not ideal when your belly is in Nepal). We had a little annoyance when we used the guesthouse’s laundry service. It ended up costing approximately 4 times as much as it would have at a laundry place a block away, when the guesthouse staff told us their service was “similarly priced” with their per item pricing. What’s more annoying is that it would have taken 3 hours down the street, but our guesthouse said it would be less than 24 hours, and we had to ask 4 times before we got it back (more than 24 hours later).

While most of the backpacker population congregates around Thamel, there are also a bunch of guesthouses on Freak Street, which had a much better street vibe than Thamel. If we were going back to Kathmandu, we would probably stay in Boudha again. But if we had to stay in Kathmandu proper, this seemed like a much better option. Walking around the city was an experience of extremes. It’s dirty, polluted, and has crazy cars, motorbikes, and pedestrians everywhere. The buildings, streets, and other infrastructure are a wreck – there are “streets” that are completely ripped up and buildings that seem to be in a total state of disrepair. But when you look closely, you start to notice that many of the buildings are incredibly old and have brilliant detailing.

It’s also shocking to see the number of shrines… everywhere. If you walk down a street and look down at about knee level, you will see little shrines that are covered in red, orange, and yellow from decades or centuries (or more?) of worship. Or you can wander down little alleyways and stumble upon big open squares with giant stupas – peaceful retreats just steps away from the madness of the streets.

We wandered around the Durbar Square area and stumbled onto a motorbike trick display, where about 6 dudes and 3 chicks on motorcycles and scooters did a bunch of ridiculous tricks with equally ridiculous names (from the traditional wheelie to the high chair).

Durbar Square itself is an area of a few blocks with a large density of religious buildings. For some stupid reason, they charge foreigners $7.50 to enter, meaning that most people either don’t go in or sneak around the payment checkpoints by entering through other streets and alleys. We can’t figure out how this trend of charging foreigners ridiculous amounts to enter public squares started in Nepal, but it’s pervasive and really annoying. Based on our observations, strictly financially, if they charged $0.50 or $1 per person instead of $7.50, it seems that tourists would be more likely to actually pay. If that happened, the spike in paying entrants would probably be more lucrative than these outlandishly high prices.

A unique perspective from family friends

One really fun treat while we were in Kathmandu was getting to meet and spend time with college friends of my uncles. Wayne and Judy are lovely, warm, welcoming, and have a perspective that only comes from living for 35 years in Kathmandu and studying Buddhism throughout that time. Wayne, who teaches meditation techniques, spent a bit of time talking with us about his philosophy of “experience” as the meditative focus and the value of melding body and mind.

It was fascinating to hear how the city has changed in the 35 years they have been there. Apparently when they moved into their home, it was all fields and agriculture, but over the years it’s been taken over by blossoming urban sprawl. The sprawl seems to be increasingly gradually, but the real changes happened during the ten years of civil war. What’s really interesting is that the local water can only support less than half the population of Kathmandu. Since the monsoon this year is semi-dry (while we were there, lucky for us), it means that not only is water in short supply, but also the hydroelectric power isn’t delivering what the city needs.

It was also interesting to walk around their neighborhood of Bhat Bettini with them for a little while. The fusion of old and new architecture here is really stunning. There are centuries-old public bathing holes (some still functional) in the middle of urban sprawl areas, and temples and shrines of various sizes and shapes and ages and deities literally everywhere, with cars often squeezing through random spaces to make sure they always pass clockwise.

Wayne and Judy also pointed out the slight renaissance of architecture in the old style. You can see which buildings are in the “old style,” and they are far-outnumbered by new buildings. But it’s also interesting to see that there are a handful of new old-style buildings popping up.

We are out of Nepali rupees and walking through the gauntlet of security checks, frisks, back checks, and metal detectors to fly from Nepal to India. What’s so bizarre about this system is that the extraordinary number of checks means that none of them actually do a good job checking for safety. It’s always surprising how the logic on this sort of thing works out.

Our time here in Nepal has been really interesting, possibly as much for personal insight as anything else. It was interesting to see how quickly we could go from feeling ill-at-ease somewhere to having a sense of comfort once we found a comfortable living environment and a sense of purpose and place within community.

And after 5 ½ months in predominantly Buddhist countries (Laos, Cambodia, Thailand, Myanmar, the Ladakh region in India, and basing ourselves in Boudha here in Nepal), we are still feeling a bit disillusioned with it. The principles may be sound (although I question starting from the idea that all life is suffering), but the day-to-day practice is just as ritualized as any other religion.

So if all that matters are ritual and intention, then it doesn’t matter what the ritual is as long as you do it with intention, right? A bigger question for another day. For now, maybe I should go light some Shabbos candles….

Kathmandu is known for having an abundance of cheap name-brand outdoors clothing.  Here’s a photo of where the “name-brands” are named:

As usual, here’s the full collection of images: