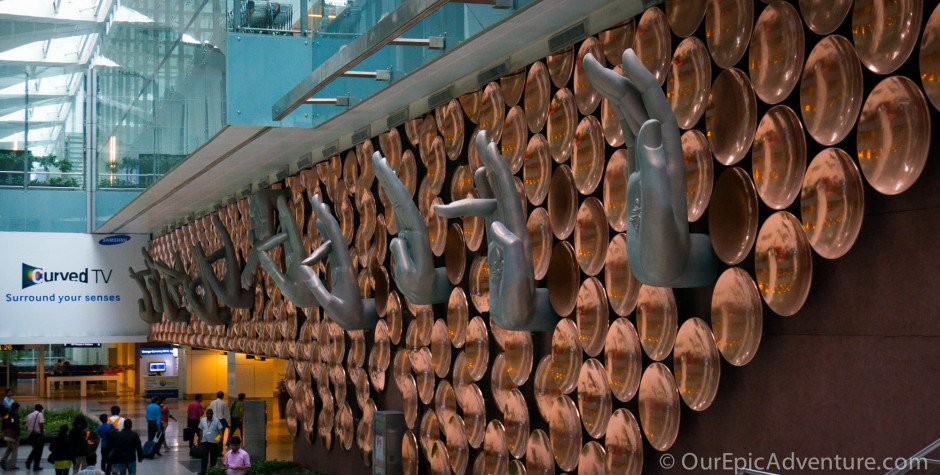 Three times a charm for my Indian visa, Or, Why I hate the USPS

We’ve had snippets of this come up and it’s always a long story to explain, so here, in one place, is the annoying story of our (ie: my) Indian visas. Plus, maybe by writing it all out I can actually release some of my frustration about the situation.

It is very easy to get an Indian visa as an American while you are in the U.S. We applied before we left the States and mailed in our passports and the applications (along with the $157.50 for application plus fees per person). We were both approved for 5-year, 6-months at a time, multiple re-entry visas. Woot!

We had to include pre-paid envelopes for them to mail the passports back to us. Thinking that the USPS (U.S. Postal Service) is usually reliable with packages, we pre-paid for their fixed rate packages that included package tracking and some insurance. This was a terrible idea. Mitch’s arrived just fine, but mine (Jewels’s) did not.

Apparently, the tracking that USPS does means that they mark a package as delivered when it goes onto the truck from the post office heading toward your building (if you live in a big building), and not when it actually enters your building. So somewhere between going onto the truck and reaching my building, USPS lost my passport. The really crappy part about it is that they will not admit they lost it or give me any sort of compensation (they have denied my claim plus multiple appeals). I only lost several hundred dollars in replacement passport, replacement visas, identity theft insurance, etc, etc.

Lucky for me, in New York City you are able to get a same-day passport. I got my new passport the afternoon of November 1st and we flew out the morning of November 3rd.

Fast-forward six months. Knowing we would be in Chiang Mai, Thailand for a few weeks and seeing that there was an Indian consulate there, we decided to apply for my new visa there. Also a terrible idea. The Chiang Mai consulate is notorious for not giving visas. In my first appointment I walked in with my perfectly filled out application and explained the situation. They proceeded to tell me that I needed to fly back to the U.S. to cancel my old visa. I proceeded to break down in tears. That helped the situation.

The guy who seems to be in charge give everyone a hard time about Indian visas, and seems to feel like it’s his job to stop people from visiting India. On my visa application I had written down that I am a yoga teacher (terrible idea!) but that my purpose of visit was just tourism. So he proceeded to explain that I was not allowed to study on a tourist visa, just to be a tourist. (Never mention yoga on an Indian visa application!) He also had some notable comments like: “I can’t quit my job to visit your country for six months, so why should you be able to quit your job to visit my country for six months?”

Here’s the catch: It started the day it was issued, so I had to go into India, use my single-entry visa, and then leave India and apply for a new visa if I wanted to stay longer. So, we decided that since June is a terrible time to visit anywhere in India except Ladakh, which was supposed to be gorgeous (it is incredible!!!), we would go there for two weeks, then fly to Nepal to apply for a new visa, then fly back into India.

Kathmandu is a relatively easy place to get an Indian visa. It requires three visits to the visa office, which is conveniently a 15 minute walk from one of the main tourist areas (Thamel) and easily accessible by taxi from anywhere.

On the first visit, you hand in your application and payment ($73 USD, or 7000 Nepali Rupees). By this time, I knew not to mention yoga teacher and put my profession simply as “email marketing” (also true). I didn’t realize that my passport photos which were part of my two approved applications did not have a white-enough background. So I got new photos taken next door to the visa office and went back in. (Somehow in the new photo I look more Indian. In my passport photo from 6 months ago I look more French. I have no idea how.)

A week later you go back for appointment number two, and they tell you whether you are approved and for how long. They told me I was approved (hallelujah) but only for three months (not so hallelujah). I asked if there was any way to get one more month, and they said no. There was no crying, to begging, no pleading.

You go back the next day for appointment number three to pick up your passport with your new visa (I have no idea why visits two and three can’t happen simultaneously). It confirmed that yes, I was approved for three months, starting the day of issue, which means that I need to be out of India by October 1st.

So there you have it! The incredibly frustrating, infuriating, nonsensical, face-palm, head-smack story of why I was approved for THREE Indian visas for what I had wanted to be one visit to India.

A few snaps for your viewing pleasure

First and foremost, as proof that we made it… I haven’t eaten at a McDonalds in years (YEARS), but I couldn’t resist the idea of a “McPaneer” in the Delhi airport!

For those of you who have heard that international flights into India get de-contaminated with insecticide before you land, here’s proof that yes, it actually does happen.

India seems to be aiming to become the consumerist capital of the world (watch out America!), starting with this “Buy, Delhi, Bye” campaign at the airport.

And finally, we had heard rumors that the Delhi airport had some great art… and we had to document a few of our yoga-related favorites!