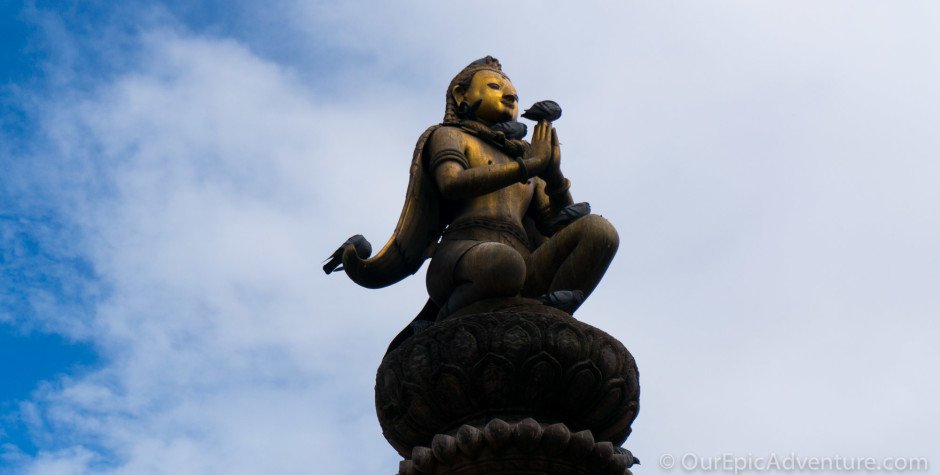 The temples and street scenes of Patan, Nepal

In days of old, three city-states co-existed in the Kathmandu Valley. Patan (aka Lalitpur) was a totally separate kingdom from Kathmandu, but now you can reach it in 20 minutes on a microbus without ever leaving the Kathmandu urban environment.

The microbus is an experience unto itself. In Kathmandu, you go to Ratna Park (passing this weird dirty reservoir thing en route) to an area where all the buses stop, and then you hop into the back of a micro. In the States, a 12-passenger van holds 12 passengers at most (and that usually counts the people in the front). In Nepal, it’s called a micro, and they regularly squeeze upwards of 30 Nepalis into the back. Unfortunately for us, we are heads taller than the locals, so it’s not the most comfortable experience.

We left our big bags in Boudha and just spent one night (two days) in Patan. Because we realized that we could go to an evening yoga class and then a morning yoga class (both at Pranamaya Yoga, a lovely studio chain in Nepal where I ended up guest-teaching), we decided to get a room near the yoga studio away from the main center of Patan. Which meant that we stayed at the oddly Christian Trinity Guesthouse. (Who knew…)

We spent a long time just walking and wandering around Patan. We stumbled into the Golden Temple, which was just exquisite. It is an impressive structure and had (live) tortoises as temple guardians and some super detailed and lovely features. We read a little about what we were seeing, but one of the things that stuck in our memories was that many temples have a golden (metal) ribbon that hangs down from the highest point toward the ground, which serves so that deities can descend to earth. Neat, huh? And incredibly beautiful. The only weird issue was a drunk guy who reeked of alcohol (in the temple at maybe 11am) who kept trying to be a guide and wouldn’t leave us alone, and then asked us for a tip at the end of our visit.

Kathmandu Valley really is a collection of cities, towns, and villages that all smushed together. At one time, Kathmandu, Patan, and Bhaktapur were all independent kingdoms / city-states, and so someone from Patan will say that they are not from Kathmandu; they are from Patan. But you never have to leave the urban center to cross from one to another. And each of the three seem to have their own Durbar Square, which are the big temple-filled plazas in front of the royal palaces of the three kingdoms.

In Patan Durbar Square (as with the one in Kathmandu), they ask for money (an outrageous amount by local standards) and a ticket to enter, but then you can take these back alleyways that spit you into the paid area without having to pay. The only issue we had was that we struck up conversations with some of the locals (people in Nepal, especially young men, seem to really want to chat). There was one guy who claimed to have an orphanage that needed support; we talked to him for a while but then explained that no, we weren’t going to go to his orphanage or give him support. So he responded by saying “wait, you don’t have a ticket to be in here” and then turned us in. So we said “sorry, we didn’t realize we needed a ticket” and turned around and walked out.

But I think we got the gist of the Patan Durbar Square experience. I’m sure that scholars, people with guides, or people who walk around with their guidebooks, can appreciate it much more. As far as we could tell, there are four main factors that make it super impressive: 1. It’s a freaking huge temple complex in the middle of town. 2. Every single surface is magnificently detailed. 3. It is stupid old. 4. Local people just chill out on (ON) the temples.

After getting kicked out, we wandered around for a while, checking out old and new public baths / water sources. There are lots of old wells and baths around the city, many of which have been retrofitted for modern-day water usage. Watching women (not men) and girls lug around heavy water after waiting on line for a while gave us a new appreciation for indoor plumbing and taps.

Then we wandered through back alleyways and courtyards, totally stepping back in time. It’s incredible how many religious shrines – from small temples to worshipped rocks – are literally everywhere. Everywhere. You can’t walk 10 meters on a street without passing some little shrine that people have been smudging colors, touching, kissing, or bowing to for centuries.

We had heard that the Patan Museum and Palace were exceptional and worth a visit, so we decided to go the next day. What’s ridiculous is that, theoretically, you should pay to enter Durbar Square and then pay again to go into the museum/palace. So we went in the back way, not paying for Durbar Square entrance, but we did pay the $4 each for the museum. Which was a totally worthwhile experience.

It was super impressive, and all their exhibitions were really well done. There was an interesting emphasis on historical art and symbolism. I took photos galore on my phone to remember some details about mudras and seated positions for yoga and such. There was also detail given to architecture – like how beautifully ornate the struts on roofs, lintels, and columns are. And within the palace and museum, it was impressive to see the extraordinary level of detail on the fountains, courtyards, and other infrastructure.

In a series of historical photographs hanging on one of the walls of the museum was a remarkable shot. Apparently in the first half of the 1900s, a few cars were brought into Nepal (for example, one was gifted from Hitler to the king here). However, because the only drivable roads were in the Kathmandu Valley, they couldn’t drive the cars in. Instead, teams of 80+ men carried the cars on long wooden/bamboo poles from the borders of Nepal to the city. WTF.

At the museum’s bell tower, which afforded a great view of Durbar Square, we met local Nepali kids who were applying for scholarships to come to school in the states. It’s was really impressive to see how focused these kids were on their goal, and also how much they needed the support that a good education would provide. But at the same time, it’s troubling to realize that while we want to reach out and help them, there are so many disadvantaged people within the U.S. who are being left behind – even in our own “promised land.”

We left Patan in time to pick up my passport from the Indian embassy (which deserves its own special blog post). So we got a quick Indian lunch at a little place with a tandoori oven out front, which always holds high promise. Then we got onto a crammed micro back into Kathmandu. (The micros cost $0.20 per person. Alternatively, it is about $3 for a cab. I think next time we’ll take a cab!)

As usual, here’s the full collection of photos from Patan! Click on any one and then you can scroll through as a slideshow.