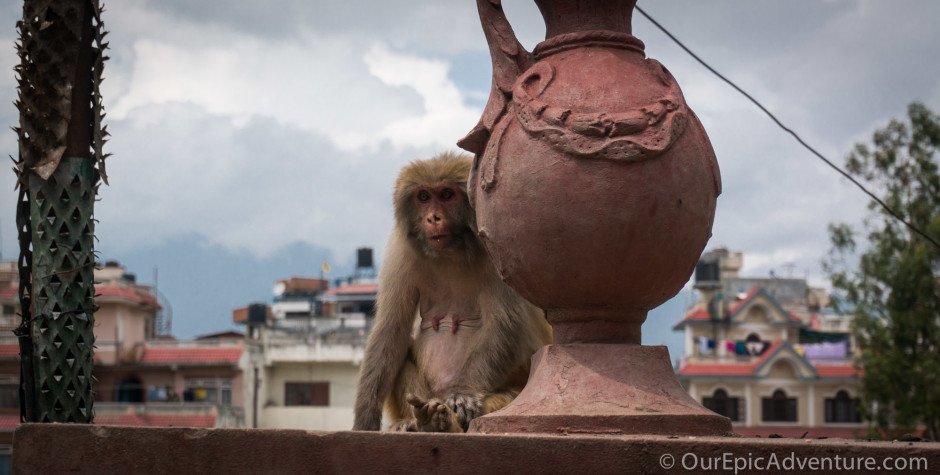 Pashupatinath, in the Kathmandu Valley of Nepal, bears its name from Pashupa, one of Siva’s incarnations. It’s an enormous temple complex, with shrines, stupas, temples, cremations, and monkeys (LOTS of monkeys). Definitely worth a few hours.

We walked there in less than a half hour from Boudha, where we were staying. It’s near the Kathmandu airport, and to get there you pass through villages that feel significantly less urban than the surrounding areas. It’s interesting – the more you walk around, the more you start to understand how the sprawl that is “Kathmandu” was once a ton of little villages that all grew together without borders or space between them. And each one actually retains its own feel as an independent village.

Side note: it’s taken us a long time, but we are finally starting to get over the symbolism of Nazism each time we see a swastika positively used here… on buildings, signs, above door frames, in the middle of mandalas. It’s an auspicious symbol in Buddhism and Hinduism (among other cultures and religions) that, from our understanding, symbolizes the spinning wheels of life. It’s fascinating how powerful symbols are and how visceral our reactions to them are!

To enter the Pashupatinath temple complex, they charge 1000 rupees ($10 USD) per person, which is absurd. We decided to walk around and see about sneaking in (which seems to work everywhere else in Nepal), skipping going to the temple complex, or just playing dumb.

Our first inclination was to not just boldly cut through and go in, but to see if there was a way around the ticket perimeter. En route to finding a side path, we encountered our first monkeys, which are awesome. Then we found a little place where there were statues for Ganesh, Hanuman, and Parvati. A local guy explained that there was something significant (??) that Parvati had done in this spot. We put a leftover banana from breakfast as an offering at the Hanuman shrine, and it was promptly taken and eaten by a monkey.

As it turned out, we met a guard who took our first ever bribe, in the form of a 75% discount (500 rupees for both of us) to enter. We just had to skip one temple where they would check for tickets (he watched out for us and told us which way to go), and then he went off to have a nice lunch on our money while we could explore and wander for hours.

The first thing we saw were the cremation ghats on the Bagmati River, Nepal’s variation on the cremations in India along the Ganges. We saw one active funeral (washing the body in the river) and several burn pyres (including one up close; we could see the feet under all the straw). I never realized before how good incense can smell.

The temple complex (i.e. temple sprawl) both in and out of the ticketed area is huge. We tried reading about each section in the Lonely Planet but couldn’t make heads or tails of it against our experience. There is a ton of information in there about which temple is for what and what the representation is of various carvings, statues, details.

But when it really comes down to it, you just wander around for hours amidst all of these temples, shrines, and other religious spots. The grounds and temple complex were gorgeous and fascinating. There are people living there, areas that are Hindu-only, tourists paying to take photos of sadhus, stupas, temples, a deer park (also related to a Siva incarnation), etc.

Pashupatinath focuses largely on Siva (pronounced, and sometimes spelled, Shiva), the Hindu god who also represents masculine energy. He’s complimented by Parvati, his wife, or Shakti, feminine energy. And so Siva and Shakti are often represented by the lingam and yoni, so many of the religious elements end up looking very phallic (not just here in Pashupatinath, but elsewhere as well).

There are SO MANY monkeys everywhere! They are both uber-adorable and kind of freaky in their humanness. A few had babies clinging to them and a few had crazy injuries – a head wound, a missing hand, etc. They were remarkably non-aggressive (thank goodness) and at one point they all went running for the trees when two big dogs came running and barking.

As usual, here’s the full set of photos from our day at Pashupatinath. We took way too many monkey photos!