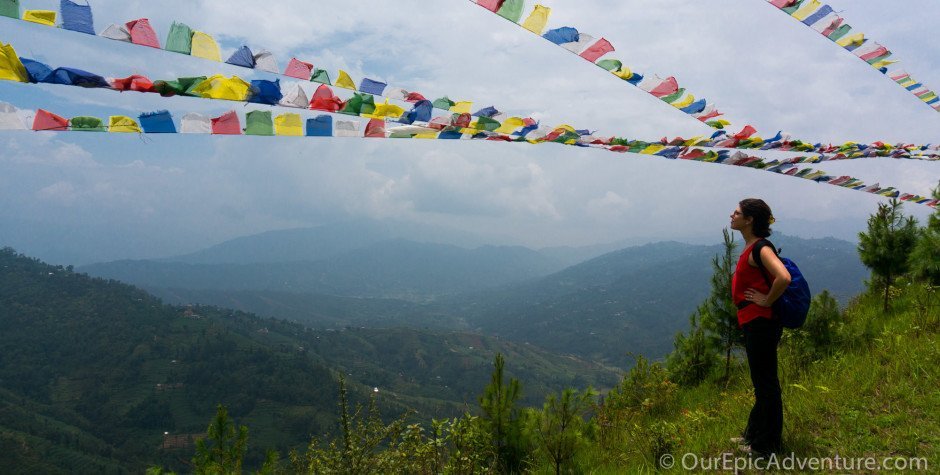 Nepal is famous for its trekking, but since we had limited time and were there during the rainy (read: leech) season, we decided to forgo the well-known trails and find one closer by. It would have taken us a day in travel each way to Pokhara or the Lang Tang trek trailhead, but when we heard about the Kathmandu Valley Cultural Trek, it seemed like the right solution.

The Kathmandu Valley Cultural Trek is actually pretty well signed, and the itinerary on the NETIF website is super helpful. You effectively hike from town to town and village to village around part of the rim of the Kathmandu Valley (north and east of the city). Plus, since we dealt with a lot of clouds and unforeseen illnesses, it was nice to be able to adjust our plans as we went since we were never really out in the wilderness.

Day One: Sundarijal to Chisopani

Friday morning, July 4th, in lieu of celebrating America’s birthday, we woke up at Happiness Guesthouse in Boudha, then we got a bus (actually a bus where we could stand up, instead of the Nepal standard of 28+ people in the back of a 12 passenger van, hallelujah) to Sundarijal, which is a half hour away from Boudha on the edge of the Shivapuri National Forest.

We had purchased a map, which was not nearly as useful as the offline Google Maps on our phone, but we had wanted to support the guy who gave us information about the trek. We had been told that we may want to purchase the Nepal trekking permit thing, but we didn’t do it. They only check in one place, and if you’re up early and zip by the check, you don’t need it.

The first day is 16 kilometers and estimated at 6 hours, and took us about 5 at a reasonable pace. The hike was almost all uphill, with these never-ending sets of stone stairs. The first half included a bunch of farms and rural areas – lots of kids, floppy eared goats, marijuana plants, and other adorableness.

The second half was all cloud forest. In the mass of stairs, our altitude increased to maybe 2500 meters. It wasn’t like other cloud forests I’ve been in. Now, in the rainy season, we literally were walking in a cloud for hours… the viewpoints were lame (just vistas of clouds, clouds, and more clouds) and our clothes were wet just from the mist. It just rained on us a bit at the end. This is the first time we have ever brought umbrellas on a hike, which was a brilliant idea on our parts.

We ended the first day of walking mid-afternoon in Chisopani at the Hotel Mountain and Galaxy Resort, having tea on a little balcony. The room is cheap, food is expensive (it balanced out to about $20 USD including accommodation and food), and the guy is super sweet and it seems clean enough. At night we watched Animal Planet-esque TV with the owners of the guesthouse, which was a really sweet experience. One interesting food experience was “hot bread” – a flour, egg, vegetable, ramen pancake that is great and dense.

From the little balcony and the roof, we watched clouds come and go, and two big groups of foreigners come into town for a night’s stay. They had a group of porters preceding them; it’s outrageous how much weight these people carry with their head-straps.

That first night in Chisopani was a little miserable. Everything felt wet and smelled a little mildewy. Mitch woke up around 2:30am super congested (we think he is allergic to mold) and never really fell back asleep. At that point, the best way out was through, so we left Chisopani at 7:30am to begin the 20 km hike to Nagarkot.

The NETIF website estimated 7 hours and the guy at the hotel last night estimated 6. We took 7 ½ hours, and we honestly don’t really see how we could have gone much faster. We went pretty damned quickly most of the day, and only slowed down for maybe 2 hours when we were on these narrow trails with tons of spider webs and leeches.

The first three-quarters of the day was through the Shivapuri National Park and was largely rainforest, cloud forest, and wetlands. The views were supposed to be epic, but we mostly saw epic clouds… although there were a few moments where the clouds parted into a window to see snow-covered mountains. It made it easy to see how these would be considered homes of the gods, and to get a sense of how stunning the views must be with better weather.

We each found a leech mid-bite into us (and shrieked and flailed appropriately in the process of ridding ourselves of them) and several on our shoes. We were accompanied partway by two sweet dogs, and for a little while by a Chinese girl and her guide. At some point midway, we accidentally didn’t ask to see a menu at a little place we stopped for lunch, and we ended up paying an outrageous $2.50 for a bowl of instant noodle soup with cabbage for lunch.

The last 2 hours were through rural paths and roads, occasionally passing through villages, with vistas of fields and clouds. Unfortunately, those 2 hours coincided with the rain, which started slowly but built up quickly. By that time we were on unpaved but wide roads and could use our umbrellas. Mitch’s mildew allergy and lack of sleep from the previous night was blossoming into a head cold/sinus infection, and he was growing increasingly sick as we went.

We powered up the last few kilometers to Nagarkot and went straight to the Hotel at the End of the Universe, which had been recommended to us. We have a cute room for just under $20 (including 23% taxes!) and there is an attached (reasonably priced) restaurant with a super sweet staff who took really great care of Mitch and kept bringing honey lemon ginger tea for him.

With Mitch being sick, both of our feet feeling done, and the knowledge that our daypacks (jam-packed with 6 days worth of stuff, all of which was wet from 2 days of being in clouds) are not very comfortable, we decided to adjust our game plan. It turns out that one really nice benefit of “cultural trekking” is that you can take buses instead of walking if and when needed!

So on the third day, we left Nagarkot and the Hotel at the End of the Universe and took buses totaling 3 hours of travel time and $2 (total) through Bhaktipur (although we didn’t actually go into the town) to get to Dhulikhel. I had called for a room at the Tashi Delek Guest House, which is kind of a rural homestay meets guesthouse experience in a nearby village called Bhattidada.

Prem (the owner) met us where the bus dropped us off in Dhulikhel and brought us to his place by motorbike. It’s a neat business he’s set up and successful enough that it seems other people are copying him and he’s expanding. It’s $12 per person per day for room and board and pickup from Dhulikhel. His place is simple but has an amazing location and views, and most of the food is from the garden. He is super sweet and attentive, and you never want for hot tea.

We spent the whole afternoon sitting and reading, looking over their garden and lovely (albeit cloudy) views and got an obscene amount of sleep.

We decided to spend a second night at Tashi Delek since we felt comfortable there and could leave our stuff. Or original plan had been to hike from Dhulikhel to Namo Buddha to Panauti, but instead we hiked roundtrip to Namo Buddha. It was a 2 ½ hour walk there, 1 ¾ walk back (hoofing it on the way back because we got caught in a thunderstorm, the first time here that we’ve seen locals run when it starts raining), plus about 2 hours there for lunch and to enjoy the stupa.

The Namo Buddha stupa is one of the 3 biggest Buddhist pilgrimage sites in Nepal (along with Boudha’s stupa) and marks where Buddha gave his earthly body to a hungry tigress.

From the stupa itself, we walked up a ton of stairs to the “cave” at the actual site – which is not a cave at all but a little building. There is also a new monastery as well as another stupa up the hill now.

We’ve taken many more photos of farm animals (including sweet floppy eared goats) than people, partly because it’s not always comfortable to ask and we get shy. And the animals are so damned photogenic. These adorable goats near the Namo Buddha monastery came up for pets and gave me a little goat kiss on my hand.

But the people are so lovely – the women are beautiful with their colorful clothes and bindis, and even the girl babies wear kohl around their eyes. And so many people, young men especially, just want to chat and talk and practice their English. The sweetest thing, though, was we said Namaste to a lady holding her small toddler, and she told the baby to say hello, so she touched her little fingertips together in prayer.

Meanwhile, on the way back, the aftermath of the rainstorm plus steep downhills plus already slippery paths (lichens and mosses growing on packed earth) made us both have some spectacularly epic falls. I went down with little grace twice, and Mitch had me belly laughing with a full-on both feet sliding and running with his feet in the air attempt for a save.

We spent the late afternoon back at the Tashi Delek in Battitdada, continuing to let Mitch recover.

Day Five: Dhulikhel back to Kathmandu

In the morning, we decided to walk past the Kali Temple and a giant golden Buddha en route to Dhulikhel from Battidada (the little village where we stayed). If we had gone straight into town, it probably would have been about a half hour (maybe 45 minute) walk, but we had a 2-hour adventure up a steep slope, past a fancy resort mid-construction and lots of farms with our stops.

The funny thing is that we went right by the Kali Temple (almost fully circumnavigating it) without realizing what it was, thought we were lost, scrambled down a slope, only to find stairs and a sign to where we just were. It seems like the Kali Temple has been there for ages but they built this big modern brick building with view tower around it, which is why it is so confusing. We also met the caretaker who lives at the temple with his family and slaughters animals at festival times.

When we reached Dhulikhel, we found the bus station and got a bus back to Kathmandu (and from, there, to Boudha). En route, we passed the world’s largest Siva statue, which was a big Siva statue. Other than that, the buses were pretty uneventful, and it was nice to get back to Boudha and chill out in a familiar and comfortable place.

As usual, here’s a full collection of photos for you to view as a slide show: