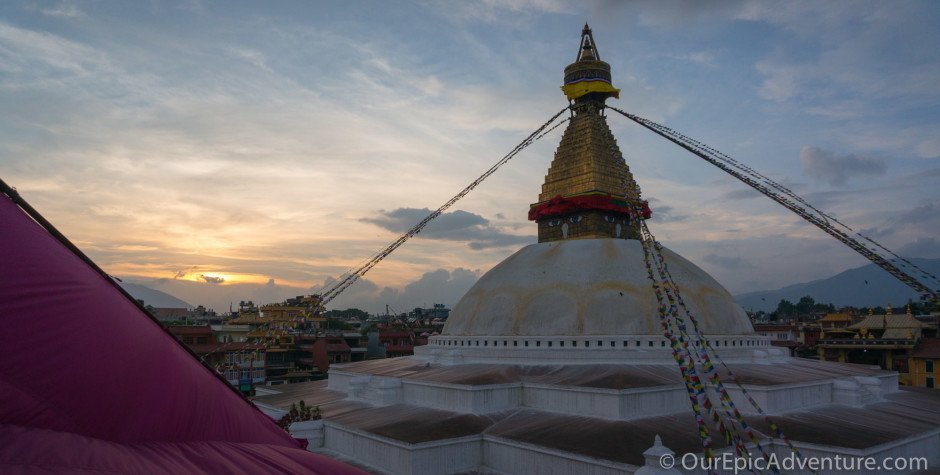 Our Nepali Homebase in Boudha

After two nights in Kathmandu proper, we decided to relocate – on the suggestion of several friends – to Boudha (first syllable rhymes with “bowl”), short for Bodhnath. It’s only 20 minutes away from Kathmandu and $0.20 per person in a van or a $3 cab ride ($4 if you don’t negotiate), but a world of difference away. It’s much cleaner, plus you don’t have nearly as much of the awful traffic and stressed-out vibe of Kathmandu.

We found a great place to stay – the Happiness Guesthouse, formerly Happy Valley Guesthouse. There are two Happiness Guesthouses in Boudha – one that’s more expensive right on the main circle and the other a block behind it (which is where we stayed). For $15 per night we have a beautiful, clean room, with breakfast included, and a lovely hotel staff who are super sweet and helpful. It’s a little more money but the value added is fantastic. The only issue is that the hot water is not always consistent.

After a couple of days being less than thrilled being in Kathmandu, we felt immediately happier in Boudha. There is a touristic feel for sure – although a bit higher class and less backpacker-oriented than Thamel, and many of the foreigners are here to study Buddhism. The strong local flavor that is heavily Buddhist with a dense concentration of temples, monasteries, nunneries, as well as the central stupa.

If you walk around just a few blocks away from the main center and stupa, you end up being the only foreigner around. You are in that Kathmandu-special where small villages have grown together into a sprawl, but it still feels more like villages and not quite as urban, with some corn and other crop fields interspersed with the buildings.

The main stupa in Boudha is huge, super old, and incredibly impressive. It’s one of the major Buddhist pilgrimage sites in Nepal and in active use. At any time of day, you will find tons of people (of all ages, genders, economic classes, and monks as well as laypeople) walking around the base, or circumambulating. The walking, as with any Buddhist shrine, happens clockwise – Buddhists even take pains to go clockwise around things when hiking, trekking, or driving. So every day, whether you are going to catch a cab or bus to go somewhere, go to a restaurant, or whatever, you end up joining the clockwise walk around the stupa, which is very sweet and peaceful.

On our first day, we went up to the higher level on the stupa and did a few slow clockwise laps. There are people prostrating with full body (belly) protection suits and wooden blocks under their hands for sliding. In the evenings, some people do their clockwise walks around the base with full prostration. There is a giant sage burning cauldron. And just tons of candles. It’s pretty incredible.

The last week we were there they added a bunch of Christmas lights to the stupa, which we think was for the Dalai Lama’s birthday. At night, all around the stupa people were prostrating and there were tables with rows and rows of lit candles.

Nepal is both Hindu and Buddhist, and they have come up with interesting ways to combine and respect the two religions. For example, many Hindus consider the Buddha to be an avatar of Vishnu (if we remember correctly). But then you also have several important Buddhist monasteries and pilgrimage sites.

We mentioned that the Boudha stupa is one of the most important Buddhist pilgrimage sites in Nepal. Boudha is also home to an extraordinary number of Buddhist monasteries and nunneries, and considered to be a main center for Tibetan Buddhism.

A few of the monasteries and schools offer summer programs for westerners to learn about Buddhism, and we met a few people who were there on month (or summer)-long study programs. Every morning, through the haze of 5:30am sleep, you can hear the bells and horns calling for morning puja, and if you walk around in mid-afternoon you can often hear chanting as well.

They welcome you to wander into the monasteries. One morning we saw that the main temple on the actual plaza (near the stupa) was open, so we stopped in to listen to the chanting. The monks were doing some sort of ceremony for a Nepali family, and it was interesting to watch the chanting, drumming, and ritual.

One afternoon we stopped into one of the monasteries while they were doing afternoon puja. We were warmly welcomed in by the monks, who, of course, offered us butter tea and invited us to sit by the novices and listen. It’s always so interesting to watch the novices in particular (the young monklets) because they are just as fidgety as other boys – just in monk robes. To our untrained ears, the chanting sounded more like kejak (Balinese monkey chanting like in the movie Baraka) than anything else at times.

On the topic of Tibetan Buddhist culture, Boudha is also now a center for Thangka paintings, a traditional art form that encompasses both mandalas as well as imagery of Buddha’s enlightenment (as well as a variety of gods and goddesses from what Nepal might unofficially treat as a Hindu-Buddhist pantheon).  The work is incredibly detailed and amazing to see – you can look through a magnifying glass at some of the master quality work and still be floored by the level of precision.

On another day, we took a day-hike from Boudha to Kopan Monastery, and it was amazing to see how quickly the landscape changed. An hour of walking and we were in more of a village/rural environment. Instead of just saying “Namaste” (which literally means “I bow to the divine in you” but is used as “hello”), people would put their hands together in prayer for greeting. It felt remarkably different for someplace so close.

Kopan itself has a beautiful temple, and we enjoyed just sitting and looking at all the incredible detail everywhere. While we were there it started raining cats and dogs, so we hung out in the restaurant area, passed time sitting and being enchanted with the main temple, and then finally decided to brave the rain and walk back to Boudha.

There a bunch of solidly decent restaurants, especially in the Nepali, Chinese, or generic Western orientation. Some of them gave us special perks, like the time that we found a small dead cockroach inside a momo (Tibetan dumpling). We pulled it out and put it to the side and kept eating, and figured that if there were another one it would just be extra protein. (It’s true, but also a test… Mom’s, are you guys reading?)

The most important things to note are that the steamed stuffed big Chinese buns are sometimes called “dapao” (which is super exciting, because we love eating them at home and will now call them “Da-Powwww!”). And there is this incredible tea which is sometimes called fruit tea and sometimes called Eight Treasures Tea. It’s a glass with a cube of sugar rock candy, a bunch of dried fruit, a jasmine teabag, and hot water (that you can refill, which is great since the rock sugar takes a while to melt). Once you’re done with dinner, the dried fruit makes an excellent desert.

Always a Home in a Yoga Community

Through a friend of a friend of a friend, we got connected with Pranamaya Yoga, which has studios in Thamel (Kathmandu), Patan, Boudha, and Pokhara. It was really lovely to have a regular daily yoga practice while we were in town, and also to teach a few classes since I was feeling a bit rusty after all this traveling.

It was interesting to experience that, after our initial distaste for Nepal, as soon as we found some small semblance of a yoga community, we started to meet great people and feel more of a sense of place.

Meanwhile, just as we ended up hauling our amazing honey around South America (until we, very sadly and probably mistakenly, tossed it before flying to Asia)… we acquired a jar of peanut butter in Nepal! We showed up to take a class one evening and the teacher who was supposed to be subbing it hadn’t shown up. They asked me if I could step in and teach (which I did), and then one of the students decided to buy us a jar of a neighbor’s homemade natural peanut butter… which we subsequently hauled with us to India!

As usual, here’s the full set of photos from Boudha… enjoy!