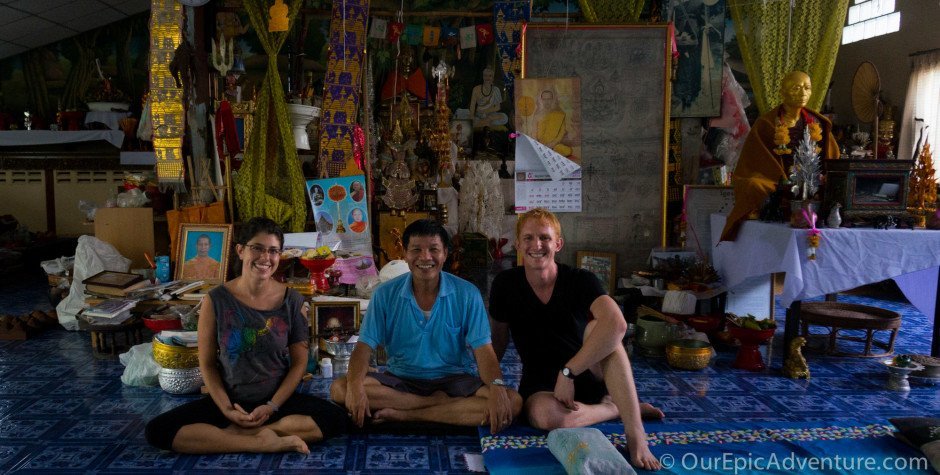 Pichest is one of the masters of Thai massage… we have been hearing about him since Day 1 of massage courses back in NYC. And, while we were totally intimidated because of his slightly crazy reputation, we decided to go and study with him for a week. We went right after the Lahu Village course, while staying in Chiang Mai and commuting (less than a half hour) each day. For added fun, one of the other women from the Lahu Village course, Valerie, also decided to take classes with Pichest, so the three of us could go together.

Getting there from Chiang Mai

You can take a yellow truck from right outside the Chiang Mai Gate (the south gate) directly to and from Pichest’s house for 15 baht ($0.50 USD) each way. His classes start around 9am, so you should catch the bus at around 8:20 or 8:30 latest from Chiang Mai. We had read online that you should call and go visit the week before going for class, but we didn’t find that was necessary.

From the market inside the Chiang Mai Gate (in the old city), you cross to the outside, then cross the moat, and you’ll see yellow trucks that are waiting on the street. Confirm that the truck is going to “Hang Dong.”

We were super lucky the first day and the driver knew where Pichest lives, and then we plugged it into our offline Google map on our phone and could buzz on subsequent days. (GPS coordinates if you use Google Maps: 18.696537, 98.930054) If you don’t have that technology, a few landmarks are passing by the Sony store on your right hand side (very helpful for us because we stopped there one day to get our camera cleaned), passing under a big blue sign over the road (pointing direction to local cities). We hear there is an American Standard sign, but we didn’t notice it. There is a building with brown roof things that kind of stands out on your right, and Pichest is just across the street from that. Just beyond his street on the main road, there are two big gas stations with large signs.

In the market by the Chiang Mai Gate, you can buy all the stuff you need for an offering to the altar. You can do it 15 minutes before you get on the bus, and you just need to do it the first day you go. You don’t need to overthink it, but it can be oddly stressful.

The offering basket is a funny thing. You bring a basket of offerings – ours came out to about 100 baht each ($3 USD), including a plastic silver basket, candles, incense, sweet fruits, and flowers (including lotus blossoms). He has red baskets for you to put your offerings into, but when we showed up with our stuff already in a basket, he said “farang offering super” so I think we did okay.

Instead of giving him money, you put it into an envelope (he has envelopes there) and write your name on it, and put it into your basket of offerings. It is 4,000 baht per week (about $125), although it seems like you can also just pay 800 baht per day, which we wish we had known in advance. The price has apparently been the same since the 1970s. For those who want it, it is about 150 baht/day to stay in a room there, so you get 100% immersed in the experience.

You walk in, put down your offerings, and sit down. Starting at about 9am (plus or minus), Pichest starts talking. When he feels ready, he starts morning prayers, which take about a half hour (he has chant sheets that you can use), to the all-important trilogy of Buddha, Dhamma, and Sangha (Buddha, teachings, and community). Then, one by one, he tells the newcomers to go put your offerings in front of the altar (the flower heads should point to the altar). Then he talks for a while more.

At some point, he asks someone to lay down and starts to show where they have energy blocks – all the students put their fingers on the spots, and some nod and indicate that they feel the energy blocks. Our consensus is that no one actually feels them. But you can sometimes feel swelling, sweating, or a change in temperature. Then, he shows how you can relieve the energy blocks, which involves really long blood stops and a number of wild and crazy techniques, some of which address the area directly, and some of which you need to work outside of the blocked area. You are usually not supposed to try out the techniques on other people, since their energy is blocked in different places.

At some point around noon or 1pm, Pichest either decides to leave for lunch or falls asleep (one day, he had Mitch trying to massage him and then fell asleep), or else the students just dissipate. There are two places where you can get pad thai, khao soi, or fried rice for lunch. About an hour after the morning class ended, people re-gather. Then Pichest resumes talking or demoing, or you just practice massaging people while he and/or Un, who we think is his son and sometimes joins, come around and correct you. The classroom is quite hot (at least at this time of year), and despite a couple of fans, the thermometer in the room read 102 F today.

Around 4 or 4:30pm, things start to dissipate again, and so Pichest starts the afternoon prayers, which we all join in. Then he says that we need to keep practicing and learn a little bit, little bit every day (the tip of his pinky finger).

On our last day in Chiang Mai, Mitch decided to go for a half day with Ajahn Pichest while Jewels stayed in town for social and chilling out time. Mitch had quite the time… he was called to light the candles and incense before morning prayer, and he was again asked to massage Pichest. But this time, instead of Pichest falling asleep, he actually gave useful feedback, and teaching. But the real highlight was that a telemarketer selling internet search service called, and Pichest put the phone onto speaker. Apparently the guy tried to sell the service, and Pichest went off on one of his usual rants about too much thinking and headaches, and the guy kept trying to roll with the punches, while Pichest was fully aware of the absurdity of the situation and laughing about it all. I am so sorry I missed that interaction!

We had heard all sorts of crazy stories about Pichest, so we were totally scared and intimidated walking in. And while he threatened hitting people with his cane and has hit all of us on the head many times (in a good-natured way), he has been an incredible person to be with – if not totally confusing and a little crazy.

Here, intention is far more important than process or technique, and it definitely feels like we have stepped back into a style of teaching that is from a time long ago and a place far away. I can see how 6 months with him would be invaluable, but at the same time, I think the crux of his teaching is said in the first 5 minutes.

We tried to distill his teachings, as he was teaching this week (since he apparently completely shifts from day to day, year to year, and decade to decade), and came up with the following messages:

His teachings are limited to a few words, so a lecture may go something like “I like, I
want, I think. Good or no good? Happy or no happy? Headache. Understand or no understand? Problem or no problem? Headache. Game over.” To demonstrate his points, there is a lot of head-smacking, good-natured threats with his cane, and pantomime (for example, buffalo horns with his fingers for too much thinking and too much working). One woman there now speaks Thai and translated something that he said in Thai for us, and it was amazingly clear, coherent, powerful, and meaningful. We don’t know how much was a lack of his English skills versus her interpretation.

Also, he has some random outbreaks about shower processes, gay relationships, how farangs don’t know how to pray, why we wear too much black, etc. When something is good, it is “super.” When something is not good (ie: all of the dozen energy blocks he identifies when he lays someone down on the mat), it is “terrible.” But between the Thai accent and his inflection, it is “tellllible!”

We think that part of the experience that is Pichest is that he is incredibly intuitive and empathetic – in a quite magical way. While you are just sitting there, he knows exactly what is wrong and what its root is, and how to treat it. He hates yoga and critiques the way farangs practice it – because we “try” to achieve poses and consequently over push or stretch ourselves, which is an act of ego instead of feeling from the heart.

Our guess is that his craziness comes from him receiving so much stimulus that he can’t quite handle it. He can “see” so much and we don’t quite know if he realizes that we do not experience the world the same way he does. So, while his teaching can be really challenging because of what he expects you to feel, it is really interesting to see how much he does feel and sense.

One of the men in the class now is Italian and used to make pizza, and he said something quite well. For 6 years he made pizza dough, and by feeling the dough he knew exactly what the dough needed or what was wrong with it. Pichest can touch (or for him, possibly just sense) skin and bodies and know exactly what is happening to the quality of the energy. And maybe that actually is something that can be gained through a lot of time, practice, and experience. Or maybe not.