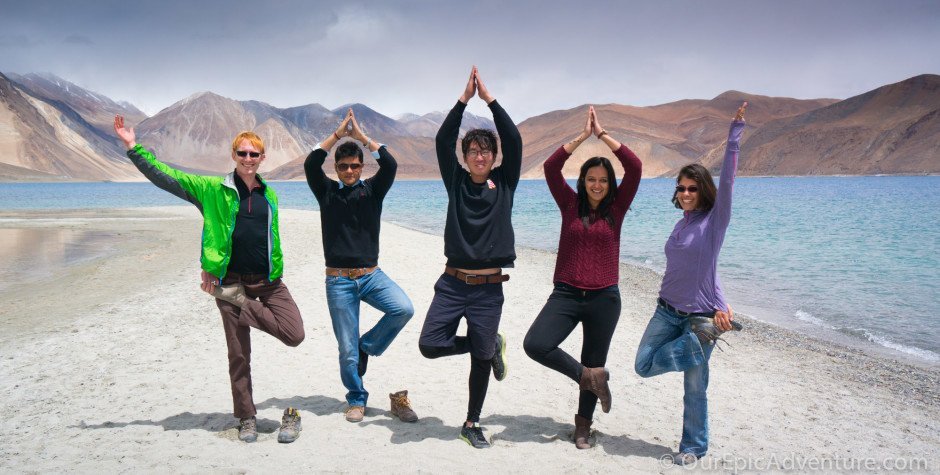 Are we really in India? A trip to Pangong Lake

During our two weeks in Ladakh, we decided to do one jeep tour, a two-day trip to Pangong Lake. There are tons of travel agencies in town that post jeeps looking for more people, so we ended up with a fantastic group for our two-day trip. It was us, a Korean guy who is impressively traveling by himself in India despite limited English, a young Indian couple with whom we immediately clicked, and our driver.

We left Leh City around 8:30 am on the first day, and decided to stop to check out Thikse Monastery just a bit outside of Leh. We’re including it in our Leh blog post, but it was pretty awesome and definitely worth an hour to explore.

The drive to Pangong Lake (or Pangong Tso) was super gorgeous, if not slightly nauseating. The road hugs the edges of mountains with all sorts of climbs, descents, bumps, pavement (or lack thereof), and epic views of the mountains and valleys. There are some moments (when you’re down in the valleys) where the views from one side of the car are completely desert, but from the other side of the car are the lush greens of farmland. And when you think that you start around 3,500 meters above sea level and go up from there, you realize the crazy scale of the landscape and mountains here.

Similar to on our short trek, it was fascinating to see how much the landscapes changed over time – from boggy areas with grazing livestock to rocky mountainous desert.

On the way, you drive over what they say is the third highest motorable road in the world, the Khardungla Pass (also known as Chang La Pass) at 5,320 meters above sea level. (Note: Travel agents here in Leh say that this is the third highest motorable pass in the world, and that the other two are also in Ladakh. Based on some of our other travels, someone is lying, somewhere in the world. But whether it’s in the top 3 or not, it’s pretty damned high.)

There was a ton of snow on the ground as we approached the pass, so we stopped for some snow photos. But once we got up to the top, there was a ton of snow that packed super hard when you made a snowball. We have missed the snow a bit during our travels, but the couple from Delhi was extra-excited to see it. There were some flurries coming down as well, especially on our way back.

It took about 6 hours of driving time – enough to make us question the sanity of people who do a 1-day trip. Along the way, we continued our fascination with the road signs that we had started seeing on the way back from our trek a week earlier. “BRO” stands for Border Roads Organization, but it is really funny to read signs like “Bro, slow down.” But even more entertaining is the creativity of the road signs, some of which took us a few minutes to get, and some had us giggling immediately.

The lake itself is gorgeous – when you first see it, it’s like a mirage of many shades of blue. And from the lake, you can see desert, mountains, snowy peaks and valleys, and big open sky or thick cloud cover, all at the same time.

We talked to a few Indian tourists (it’s a popular place to come, in large part due to a popular movie called the Three Idiots, which we just watched and is ahhh-mazing) who were just amazed by it. The most common reaction is shock that something this beautiful, pristine, and natural is part of India. One guy who we talked to (who had been before) said that he showed photos to his grandmother, and she didn’t believe him that they were photos and not paintings.

The only issue for us was the temperature, which I would define as “f-ing freezing,” thanks largely to strong winds and cloud cover. Staying overnight, you have an option of a homestay (200 rupees per person, or $3.50 USD) or tents, which cost a remarkable 3000 rupees ($50 USD) per tent, which houses two people. We couldn’t fathom why anyone would choose the tents – they are not much fancier than the homestay rooms, but they are much colder. Mehul (the woman from Delhi in our group, and my new BFF) told me that staying in a tent is a novelty for Indian tourists, which is why they may be more interested in paying such a high premium for the experience.

Staying at the same homestay/tent area as us was an adorable 45-member motorbike tour group. At first I was a little worried when all the motorbikes vroomed in and all the guys started getting off and walking around. But we soon realized that it was a super sweet, friendly group. It’s a tour group called Ride Ladakh, where they are on a 15-day circular journey starting and ending in Delhi that included a support vehicle, medical support, a mechanic, and a documentarian/videographer. Some of the guys were experienced bikers, but some were getting the hang of it on the road.

Then we went to the spot where the famous scene from the Three Idiots was filmed and took some more group photos. Mitch and I inadvertently had an acroyoga photo shoot and again remembered how much we need to practice.

On the drive back, we had great company and conversations. Mehul and Jiten shared photos from their wedding a bit over a year ago, which totally blew my mind. They had a traditional Indian wedding, with 1000 guests, days of celebrations and rituals, and incredible clothing and photos. We wouldn’t trade our wedding experience for anything, but man, we really hope we can experience a traditional Indian wedding!

Coming back over the Khardungla Pass, we stopped again and had a quick bowl of thukpa (Tibetan noodle soup). We also had a few unintended stops because of various roadblocks. At one, the back of a truck carrying a load of steel beams somehow came open, so there were piles of red steel beams in the road. We helped to move some of them to make enough room for some of the cars to pass. (By which we mean, the boys helped. They yelled at Jewels for trying to help.) In another spot, they were dynamiting to expand the road. As we approached the curve in the mountain, we saw a giant boulder shooting off the side of the mountain and landing on the road, followed by a spray of smaller rock. Then they had an excavator waiting there to clean up the mess.

For your enjoyment, here’s the full collection of photos from our two-day trip to Pangong Lake. As usual, if you click on one, you can scroll through them all slideshow-style: