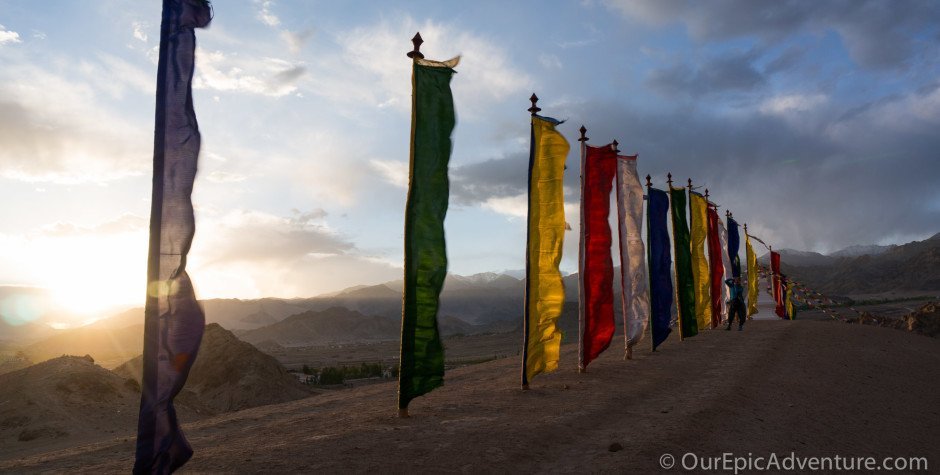 The sound of prayer flags in the wind

During our time in Ladakh, we spent a bunch of time at programs of the Mahabodhi International Meditation Center, which was truly inspiring. We started our time in Ladakh with a 3-day meditation retreat at the center. We took a bunch of classes at their city center, and then went on their Sunday program.

The day after we arrived, we decided to take advantage of already being a little “high” from the altitude and start a 3-day meditation retreat at the Mahabodhi International Meditation Center, which is part of the Mahabodhi Campus. It’s a half hour out of Leh City but feels a world away in the secluded mountainous desert.

The sky is huge, you see snowy or desert mountains in every direction, and the moon, sun, and clouds are incredible. Breaking the stillness is the sound of prayer flags flapping in the wind, which somehow brings an even deeper sense of stillness.

The program is 3-days of silent retreat, and it aims to bring meditation to westerners in a way that we will want to integrate it into our daily lives going forward, instead of hitting us over the head with it so we run away from meditation and stillness.

Here the Venerable Bhikkhu Sanghasena (Guruji) usually is more involved with the short meditation retreats, but he was overbooked and a bit ill so he just sat with us for one session. That hour or two with him was remarkable. One person in our group pretty much broke down in tears with the sentiment that Guruji is “the real deal.”

Our teacher for the retreat was a woman named Kunzang, who is super humble and felt overwhelmed to be asked to step up and lead our group. She has a lovely, nurturing energy, is very knowledgeable, and had a wealth of stories to help us dive into the meditation experience. At the end of the retreat, we found out that Kunzang was in the first group of 25 girls when the center opened in 1992 when she was 6 years old, and she has become/remained super committed and has a lot of inspiring stories about Guruji and what he created with Mahabodhi.

We wish that we had recorded the teachings that Guruji shared during our one sitting with him. But one of the things that we all walked away with is that he asked why people were not trying to become enlightened in this lifetime? It’s the first time we had ever heard a teacher say that – why save enlightenment for the next life? Why not be open to the possibility of becoming enlightened in this lifetime? And what is enlightenment, really? He defined it simply as “living with love and accepting what is.”

Mahabodhi has a center in Changspa (in Leh City). They have a little library/bookstore and a packed daily schedule of meditation, pranayama, and hatha yoga classes. For the days that we were in Leh, we spent most mornings at the center in a lovely and slow 2-hour hatha yoga class with a German man named Mike, who seemed to feel deeply committed to the yoga lineage as well as the mission of Mahabodhi and other projects he was involved with elsewhere.

The Mahabodhi Sunday program was interesting. The small group that had signed up (the two of us, two Israeli travelers, and a Belgian man) gathered at the Mahabodhi City Center and left town around 9am. Then we drove the half hour to the Mahabodhi Campus for their weekly Sunday service.

All the kids/residents/etc. (about 500 people total) join for a 3-hour service every Sunday. The service includes Buddhist chanting (very sweet, but imagine the eardrums’ reaction to an army of little kids shouting chants), a short dharma talk with Venerable Sanghasena, and a program where the different groups of kids lead songs.

In the last part of the program, they do an introduction of the foreigners (both from the Sunday Program and guests at the guesthouse), so all of the guests have to get up and stand in the front of the hall for an introduction as well. That whole part of the service, with all the different groups of kids and beneficiaries introducing themselves and singing songs, is directed to the visiting foreigners and is ultimately meant to make foreigners want to donate heaps of money. It’s about $700 to sponsor a kid for a year, with all housing and schooling, and they connect a specific sponsor and a specific kid. Considering how much good it does, it’s actually a very small pricetag.

After the Sunday Service, you have lunch and then get a tour around the campus and learn about the various programs. Mahabodhi’s website is http://www.mahabodhi-ladakh.org, although it may not do all the good happening there justice.

We had previously seen the meditation center for the 3-day retreat, which draws mostly foreigners. Apparently locals have traditionally questioned why they would meditate and what that has to do with the giant Buddhas they pray to, so they wisely decided to make the meditation center specifically accessible to introducing westerners to meditation. For the foreigners, there is also a pretty guesthouse where you can stay, a restaurant (for visitors in the guesthouse), a meditation room, library, and gift shop.

The rest of the campus provides services to some of the people in Ladakh who need help the most. There is a home for the elderly and physically/mentally handicapped people, which currently has about 30 residents. There is a boys hostel and a girls hostel, with about 130 residents each. The kids range from ages 4 – 16, and their admission to the program includes accommodation and food as well as all schooling through 10th grade (the Indian standard). The boys and girls hostels are at capacity now, and they accept 15 – 20 kids of each gender each year. The kids are from poor families in villages around the state, and the program represents an incredible educational opportunity for many of them – and opens up a lot of doors for their futures. Both Kunzang, who led our meditation retreat, and the lady who manages the city center and led our Sunday tour, were residents of the girls hostel at one point.

There is also a home for blind children, which currently has 6 residents, and a monastery and nunnery, each with about 25 residents (both adults and kids). The child monks and nuns have to decide to enter by their own free will (whatever that means), and it is yet another way for kids to be exposed to educational opportunities. All of the kids in the monastery, the nunnery, and the home for the blind go to school with the kids from the boys and girls hostels. Mahabodhi also has a hospital on campus which is open 6 days a week to serve the needs of all the residents.

The whole visit was really sweet, but props to the girls on cuteness and enthusiasm. They came flooded out to greet us and immediately huddled the second a camera came out.

It seems like Mahabodhi really does an incredible amount of good for local people. Instead of having a focus just on meditation and prayer, the programs here emphasize the importance of putting love and kindness (metta) into action and helping people.

At the same time, we couldn’t help but think that in the States, when a Catholic charity (for example) helps a ton of people but makes them participate in religious services, it makes us really uncomfortable. Why are we inclined to think that it’s better for a Buddhist organization to help people and promote Buddhism than a Catholic organization doing the same? Regardless of the religion involved, when the motivation and intention are so noble, how can we complain? Perhaps we need to re-think that cynicism.

One more little and unrelated gripe about Mahabodhi…. Part of the vision is to make the valley green (this whole area is super arid desert), so they have planted a ton of trees, shrubs, grasses, and other vegetation. Which is great, except that it’s incredibly wasteful of water in the middle of a bone-dry desert. They don’t seem to use just a little water through careful use, but they seem to absolutely flood areas of plantings in the middle of the heat of the day. And while some of the plants are selected for a desert environment, there is also a lot of grass that seems to require a lot of water to stay green. It’s bizarre.

Anyhow, despite these very minor grievances, it was truly inspiring to see Guruji’s dedication and experience how much good the Mahabodhi programs have done for so many people in Ladakh.

Here’s a full collection of our photos from our time at Mahabodhi.