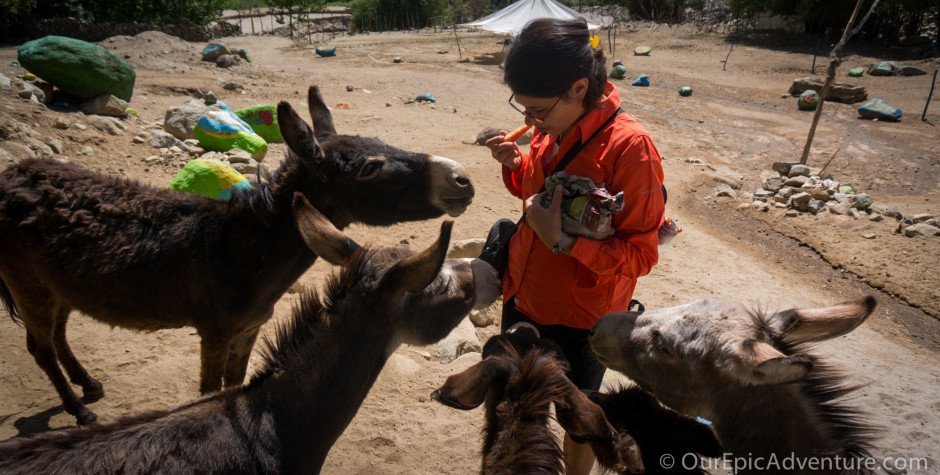 A woman we met in Thailand had given us some travel recommendations for Ladakh. But above and beyond, more than the monasteries, the treks, the natural beauty, she said “Promise me you will go to the Donkey Sanctuary!” And so we did…

We bought a kilo of carrots in town and then proceeded to walk about a half hour (uphill) to the Donkey Sanctuary, which has these cute signs around town more or less pointing toward it. The Donkey Sanctuary opened in 2008 and aims to rescue old, helpless, and abused donkeys. Val and Annette (a fantastic Australian couple we met through Mahabodhi) had gone and had the sweetest things to say about it. For us, it was… an experience.

As it turns out, here in Ladakh, donkeys are used for all sorts of work. And in Leh City, you regularly see them on the streets, nibbling on garbage or begging for food at fruit and veggie vendors. And while they have some regular-size donkeys here (“big asses” as it were), most of them are adorably tiny!

We arrived and the caretaker wasn’t around, so we waited about 20 minutes and were about to turn around and leave when he arrived and let the donkeys out of their donkey house to enjoy eating grass. It turns out that he had gone to his family or something the night before and was very apologetic to be arriving so late – both to us and the donkeys.

They were super excited to see us, or at least the carrots we fed them. They nuzzled right up, gave us little donkey kisses, and were very friendly giving us nudges with their heads for more carrots. They were really sweet, and just slightly aggressive about food, until a couple of them got into a scuffle and Mitch’s arm got bitten. (He’s totally okay now. Just a little bruised.)

There were a few baby donkeys there – one was just 3 days old and already looked about ¾ as big as its mama donkey. To be fair, the donkeys here are all adorably tiny, but the babies are especially cute. The three-day old one had an injured foot – apparently during the birthing process his mom was agitated and somehow stepped on the newborn’s foot.

The caretaker was a one-man donkey hospital, and we helped with the process of cleaning and bandaging the wound while the poor baby donkey was in pain.  It wasn’t the most hygienic process, but the caretaker did his best and the donkey seemed better afterwards (plus a little time for sulking).

We were worried about the baby donkey since his wound looked pretty brutal, so we asked the caretaker if he was going to live. There were some language issues, but he was trying his best to communicate to us with his very limited English. So, he responded with a smile: “yes, yes, just one dead donkey.”

The caretaker, Mitch, and Will proceeded to drag (literally) the carcass to the end of the Sanctuary then to the riverbed. The caretaker spent a few minutes in silent and special prayer for the dead donkey, then they dumped the carcass into the dried up riverbed.

We ran into Will on the street later on; he had gone back to the Sanctuary the next day and reported that within 24 hours, the donkey carcass had been cleaned to the bones. And there were several happy dogs lying happily around.

It was such a weird experience that we just had to laugh. But we appreciated both the matter-of-factness with which the caretaker approached the situation, and also his sweetness in saying a prayer for the dead donkey. He must have been so glad there were two men visiting the Sanctuary that day! And he expressed his appreciation repeatedly.

He invited us all in for milk tea and to try yak milk (gnarly), and we talked about English and Ladakhi words for a while and expanded our meager vocabulary. He was a lovely person and seems very happy to meet foreign visitors.

We may have only been there for a couple of hours, but we took a remarkable number of photos at the Donkey Sanctuary of donkeys… dead and alive: