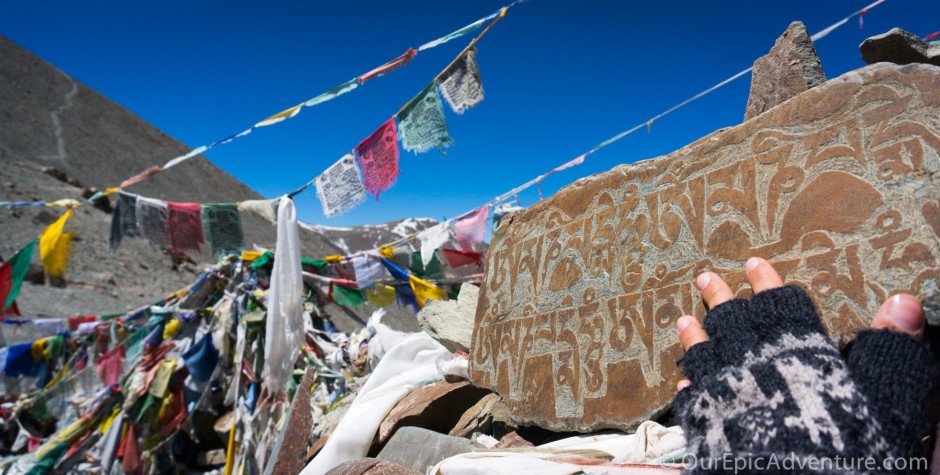 A short trek in the Ladakhi Himalayas (Zingchen to Chilling)

Ladakh is known for epic Himalayan trekking, and we decided to forgo the longer options and do a shorter trek. (Read: I told Mitch I would trek for 3 days, maximum, and he said okay.) We were both excited by the idea of a 3-day trek that would be challenging and include one high-altitude pass, but wouldn’t kill us… and might actually leave us wanting more.

We decided to have a travel agency arrange our trek, which roughly doubled the price, but also meant that we didn’t get lost and that our guide provided a good lens for the local culture. Ancient Tracks tour agency was recommended to us, and the owner, Lobzang, has a long history of volunteerism – plus he had a good vibe. It cost about $200 USD for the 3-day, 2-night trek, including transportation, lodging, guide, and food for the two of us. Our guide was a 24-year-old man named Stanzin who is from a village here in Ladakh (“large village” defined as about 20 families, a road, and power lines). He is finishing up his college program in physical education (which includes some yoga), and he was a pleasant and interesting person to spend three days with.

Our first day, we drove an hour or so from Leh (about 3500 meters altitude) to Zingchen, and then hiked to Rombek, where we had our lunch (brought from Leh) and tea in a tea tent, which has a very playa feel. Then we continued onward from Rombek to Urutze. The whole thing took us about 4 hours, although we apparently could have added an hour by detouring through the village of Rombek. The hike was pretty mellow, alternating between desert mountains, dry riverbeds, and semi arid areas. We were surrounded by snow-covered mountains all around – as they say in Spanish, “impresionante.”

It’s interesting that as you hike, there are tons of prayer flags, stupas, and rocks with old carvings of prayers (“om mani padme hum” being the most common). It’s a beautiful way to break up the journey, and an interesting way to experience how pervasive Tibetan Buddhism is – and how many people have considered these areas spiritually moving.

Urutze, at about 4,000 meters altitude, is a “village” of 1 family (yes, that’s not a typo) – a large house and some agricultural fields. It was a special experience to stay there. The family chose an incredible place to homestead 100+ years ago in this high altitude valley, with a little stream at the bottom and the ability for fairly fertile soil (so it seems). We were amazed to see some areas of snow in the bottom of the valley, slightly below the house! The grandpa of the family is super sick and in his final weeks, so he was laying under blankets in the sun when we arrived, and we were lucky they let us stay there. The grandma is super strong and worked in the fields. Two of their kids (plus spouses) live there, along with one of their 2-year-old kids, who was super adorable. The older kids are in Leh for school and it sounds like education is a big priority of the villagers. The family made us a huge delicious dinner and breakfast and a packed lunch for the next day.

We hung out there all afternoon with a German guy named Marcus, who has apparently traveled through some 40 cities in India in about 4 months – way more stamina than we have! It was fun to hike with him much of the second day, and to see each other from afar on the trail and take photos of each other waving.  (Do you see him up on top of the ridge in the red jacket?)

The second day was about 9 hours of hiking. We really wish we had known how it would have played out, because we could have stopped after 6 hours and then had a longer hike the third day (which was, for some nonsensical reason, scheduled to be only 1 ½ hours). But, alas. 9 hours. Up the highest pass on our short trek and then back down. We started out fairly early in the morning, and zig-zagged with a pony man and his horses in addition to Marcus.

In the States, cow bells don’t make particularly pretty sounds. But here, the horses had different bells on their necks that each made a different yet pretty sound. So sometimes when they were approaching, there was a melodious echo throughout the valley.

Ultimately, we made our way over the Ganda La Pass (alternately called Kang La Pass), which different maps showed around 4,900 meters altitude, or up to 4,970 meters. It shocked us to realize later that our “high altitude pass” on the Inca Trail to Machu Picchu was only 4,250! And man, was it serious!

Early in the morning, gaining altitude, we saw a ton of wildlife – trip highlights included blue sheep (which we are convinced is a misnomer for mountain goats), Tibetan antelope of some sort with these huge horns (we forgot what they’re called exactly), rabbits, marmots (tons of them, and they walk like old men), plus tons of neat birds, including these quail-like birds called chukar that can’t take flight from the ground but will run up mountains and then jump off to catch the wind. There are also pretty black-and-white magpies and regular old pigeons, even at the top of the pass!

The vertical gain was super serious. As we went higher, we saw several more patches of snow, although we never actually hiked through it.. We both were out of breath because of the altitude, and as we neared the top, we were pausing to rest every 10 or 20 steps. The view from the top, where we had lunch and did a yoga photo shoot by prayer flags, was epic.

The Himalayas are just huge. They dwarf everything and make you feel tiny and impermanent and inconsequential. But the real magic of the “walking meditation” (ie: huffing and puffing our way up while getting high on the lack of oxygen) was when you realize that the mountains are impermanent too. Even these looming snowy peaks have not always been here; they were created by the moving and shifting of the tectonic plates, and at some point in the Earth’s history, they may cease to be here.

The colors of the rocks and mountains are insane. Several months ago, we were in an area of Argentina known for the colors of its mountains (there, they have poetic names like Painter’s Palette, and the 7-colors Hill)… but the colors here are more extreme than anything we have seen before. The hues are richer and the changes from one color to another more abrupt than anything we have experienced. You look down at purple rock and get so used to seeing purple, that all of a sudden you look up and see a green rock area, and the green looks so extraordinarily green! Or you are walking in a green rock area, and then it’s almost like there’s a line in the trail where the rock turns tan. And the sky is blue-blue. Often with zero clouds. Just blue. Far deeper than what Crayola thinks sky blue should be.

Suffice to say, after we crossed the pass, the walk down felt so much easier and every breath felt more oxygenated. We paused at the village of Shingo for tea (where we should have stopped for the night and saved the last 3 hours for the next day). And then we walked onward to Skiu, which is another little village in a shockingly lush green valley. Most of the homestays were full of trekkers, so we stayed at one 10 minutes away. The homestay itself was totally fine, although for some reason neither of us slept very well. Unlike in Urutze, we didn’t really get to experience the local family life, but we were happy to hang out with an American couple from San Francisco, Brittany and Navin – she somehow took the leap of faith to move to India for 7 months of work, and they’re on vacation here while he’s visiting.

Mitch took this very artsy photo of the bathroom, which deserves a special call-out. The local bathroom style (as far as we can tell from these two homestays) is a dirt room on the second story with a hole in the floor, and they use everything to make compost. Amazingly, while there’s a bit of a generic “barn” smell, it smells MUCH better than most bathrooms.

Our last morning on the trail, we only had an hour and a half or so to the end-point. So we decided to wake up early and walk in the other direction (toward the Markha Valley; this 3-day trail and the 5-day Markha Valley trek kind of make a T at Skiu, so some people hike them both as an 8-day option). We found a pretty spot to sit down by the river for a little meditation. Then we walked up to this old and largely unused monastery in Skiu. Brittany and Navin had heard it is from the 10th century, which is craziness. Now, no monks live there, but apparently sometimes they come here for prayers. It was really beautiful and felt like a window into the Tibetan Buddhism here.

Then we hiked to Chilling, which was partly down this area that is being turned into a switchback-highway for cars, and took a scary little cable car across the river. There is a bridge under construction now that should be open to trekkers by foot next month, and to cars next year – but for now, it’s just the scary little cable car.

Then we got into our taxi that was waiting for us, and started the drive through crazy roads back to Leh. We saw the confluence of the Indus and Zanskar Rivers, which was stunning because of the color difference. There were some road signs that showed off the poetic talent of someone in the local government: “After whisky, driving risky.” “Take heed, reduce your speed.” “Drive with care, accident rare.” (Unfortunately we didn’t get a photo of the whisky one, which was clearly our favorite.)

More blog posts about our time in Ladakh coming soon… but for now, here’s the full collection of trek photos. =)