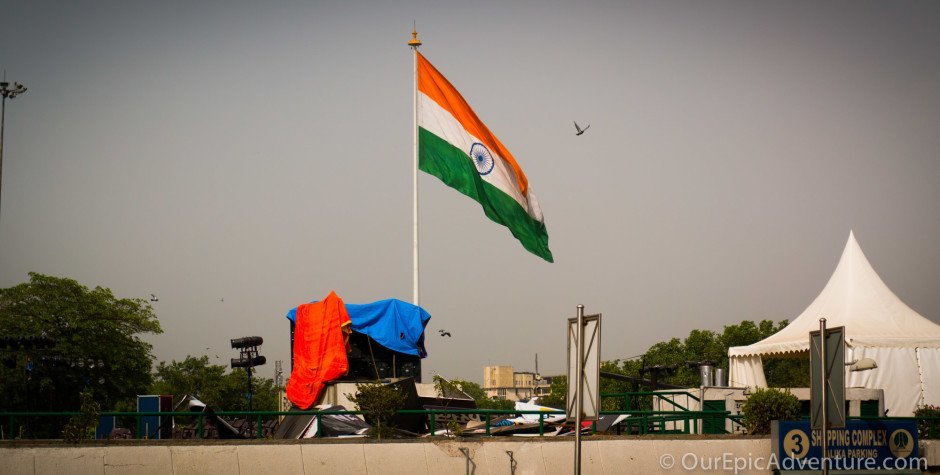 Lemons into Lemonade? An annoying layover in Delhi

Early on the morning of 9 June, we woke up early in Bangkok, bid adieu to our time in SE Asia, and headed to the airport. Our first flight to India was uneventful, apart from the discovery that Indian men snore more loudly than others on flights. We had an 18-hour layover scheduled in Delhi in the middle of our transportation from Bangkok to Leh (in Ladakh in northern India), so we touched the ground in Delhi at 11:30am, then departed again at 5:30am the next day.

Our plan had been to stay in the Delhi airport and take advantage of comfy chairs, air conditioning, and wifi. In the Bangkok airport, the Jet Airways agent put stickers on our bags through to Leh (with the caveat we’d have to collect them and bring them through customs ourselves) and told us it would be no problem to stay in the airport. When the pilot announced a high temperature of 45 Celsius in Delhi, we were even happier with our plan. (To save you the conversion, that’s 113 Fahrenheit).

Reality doesn’t quite work as well, eh? After customs and immigration, Jet Airways in Delhi refused to take our bags (with the stickers for the second leg already on them) and told us that we weren’t allowed back into the terminal, blowing our chances of comfort and wifi. Since we hadn’t looked up anything in Delhi, we went on the suggestion of the airline people, which was that Aero City, one metro stop from the airport, would have affordably priced rooms, and that we should come back to the airport at 3am the next day to check in.

Aero City wasn’t the most brilliant idea, and we ended up spending $25 USD on a room, which was a 50% discount but double what we had been told we should be paying. But, it was disturbingly hot, we were dehydrated, and every breath felt like we were burning our tracheas, so we were not positioned to find another place for our lodging. At least they had wifi and air conditioning!

Via www.wikitravel.org (as usual, an excellent resource), we found out that just two metro stops away was a bunch of shopping stall areas and restaurants. So we went. Thank goodness.

The highlight of the day was a vegetarian thali place where we ate lunch (/dinner). It was expensive by local standards ($13 for both of us), but fantastic and definitely two meals worth. We stuffed ourselves silly and they kept coming over to fill and refill our 10 dishes of veggies, curries, daal, ginger stuff, mango soup, etc., plus at least 2 desserts and 5 kinds of breads and rice – all limitless. What’s more, it was incredibly efficient – as soon as one dish on our plate was empty, they would refill it, or this guy would ask if we wanted more of something. If we said yes, he would clap his hands and motion, and 5 other guys would surround us with dishes.

Meanwhile, our brief experience of Delhi was that it felt and smelt reminiscent of Myanmar (slightly backwards, considering that many people say Myanmar is reminiscent of India). And while we had expected a crowded jumble of people pushing each other around, or taxi drivers swarming you at the airport, our brief experience didn’t make it seem any more crowded than any of the SE Asian cities we have been in recently.

What was staggering, though, was our slight glimpse of the poverty here. People were sleeping everywhere, so many families and children on the street. And there was a level of desperation – and acceptance and commonality of that desperation – that we have not experienced anywhere else. After various travels in Central and South America and SE Asia (not to mention the increases in homelessness at home), we didn’t expect India to surprise us as much as it did. But after just this briefest of experiences, we know that we are in for a shock at the poverty in this country.

The next morning, we woke up before the crack of dawn, overpaid (sigh) for a taxi to the airport, and then checked into our flight to Ladakh. More later.