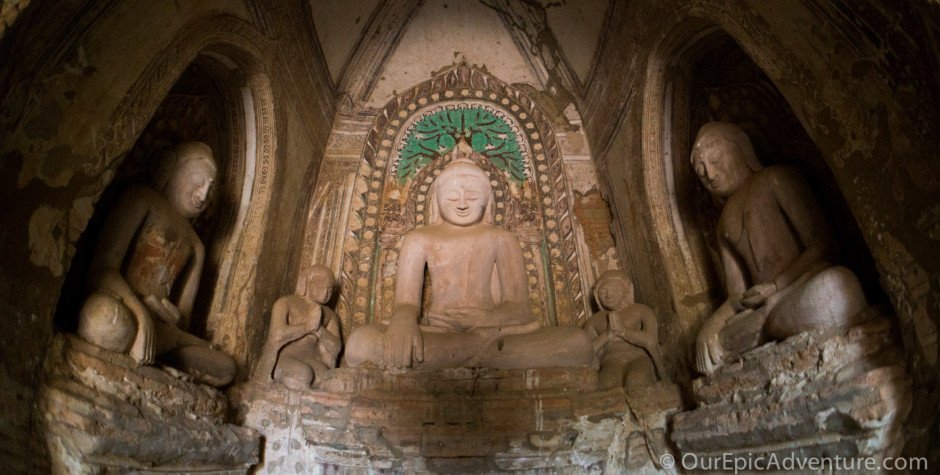 We had a resounding number of people tell us, “you have to go to Myanmar,” but when we started to look into specifics, it was absolutely confusing to figure out. So, without going into too many travel stories, we decided to put some of our notes into a logistics blog entry. For specifics on the few places we visited, check out our blog entries on Yangon, Inle Lake, and Bagan. Hope this is useful to someone. =)

The biggest thing to know about traveling to Myanmar is that it’s constantly changing. We talked to people who were there 3 years ago, 1 year ago, and 3 months ago, plus read a whole mess of information online, and it’s all changing faster than even the internet can keep up with. Our travels were in late April 2014.

We spent time in Yangon, Bagan (New Bagan), and Inle Lake. There were a ton of ATMs in Yangon and a limited number in Bagan and Inle, but you have a 50/50 shot of them working, so it is wise to take out money in a big city. The exchange rate we got by changing US dollars versus at an ATM was almost identical. We paid for hotels in US dollars and just about everything else in Myanmar kyat (pronounced chyat), and the exchange rate was approx. 960 kyat / 1 USD. If you are going to use or change dollars, it is important to follow general internet advice of having uncreased, unstamped, clean, new US bills. They will reject bills that are not deemed up-to-snuff.

We had heard that you can only enter and leave Myanmar by air and that the land borders can only be used for 24-hour visits. That said, while we were there we met a couple who had entered by land and was planning to leave by a different land border, so maybe times are changing. Our flights on Air Asia between Bangkok and Yangon ended up being $100/person in one direction and $50/person in the other direction. The more flexibility you have on dates, the more likely you are to get a $50/person/flight price. Air Asia and Nok Air seem to be the two cheapest and most reliable airlines.

We heard that some people are now able to get tourist visas on arrival.  We decided not to take that risk and just got ours in Bangkok, which was super easy.  You go to the Myanmar Embassy in Bangkok (2 blocks from the BTS/Skytrain) in the morning, fill out some forms, drop off your passport, passport photos, and photocopy of your passport, and pay them $25/person.  Then you come back two days later and pick it up.  For more money, you can get it next-day or same-day.  We hear that they sometimes scrutinize visa applications if you list your occupation as being in media, journalism, nonprofits, etc.

We had heard horror stories about how awful the buses are from people who traveled in Myanmar just a few months before we did, so we were prepared for the worst. But, we were surprised with some of the best buses we have had on our travels. (Possibly because they are all brand-spanking new.) The seats were large, comfy, and reclined… and looked exactly like they did in the photos the travel agencies showed us. The bus companies provided complementary beverages (where they called soda “juice” due to some weird translation error) and snacks on board, fresh clean blankets, and were far more pleasant on both music and temperature than most other buses in Asia. One bus even had a porter system for dealing with baggage, and both of them gave us checked luggage tags.

We took two night buses and were amazed that they both left right on schedule and arrived (shock of shocks) exactly on schedule. And while people warned us that buses left and arrived at ridiculous times (like 4am arrivals), we experienced no such insanity. The night buses (one between Yangon and Bagan, and the other between Yangon and Inle Lake) were approx. $20 per person.

On one of the buses, there were a bunch of hairpin turns that would probably have been terrifying had we seen what was happening outside… but we are happy to report that the bus driver slowed down to a near stop to handle each one safely. We were wondering if they are so nervous about making sure tourism works that they are just far more careful than in other countries.

Worth a few photos, on one bus, we had a half-hour stop at a rest area that was so shockingly fancy – well-lit, clean, organized, packed with fancy VIP buses – that we felt like we were in a dream.

Between rumors of bad roads and bad buses between Bagan and Inle Lake and the short amount of time we had in Myanmar, we decided to fly from Bagan to Inle. The flight was $82/person through a great website called www.visitmm.com, which remarkably doesn’t charge taxes and airport fees (which would have nearly doubled the ticket price).

The flight was ADORABLE – no passport checking, no assigned seats, no computer or printee (only handwritten) passenger lists – but, like on a bus, we got a sticker on our shirt and a little pastry for the ride.

Choosing whether to say “Burma” or “Myanmar” seems to be a challenging issue for travellers. It seems like most people from Myanmar say “Myanmar,” as does most of the rest of the world (aside from the U.S., although most of our media seems to have converted)… so we decided to follow suit.

Talking to people from Burma/Myanmar outside of the country (ie: in Thailand) made it seem like people say they are from whichever name was being used at the time of their birth. A few local people we met said “Burma” instead of “Myanmar” and one person even said he was from “Rangoon” (instead of “Yangon”); we are not sure how much of it is a political statement versus what it was called at the time of someone’s birth versus some totally haphazard system.

More challenging for us… we were tempted to say that Myanmar is the country but that the adjective is Burmese (food, people, language). This does not appear to be the case, and you would actually communicate things like “How do you say ‘hello’ in Myanmar language?” instead of using the world Burmese. We have no idea if this was proper or ideal, but it’s what seemed to work well for us.

People in Myanmar seem remarkably educated, or at least remarkably interested in learning English. Surprisingly, more people here speak English, and those that do speak it better, than anywhere else we have been on this trip. We met people who went to school only through the 4th grade who could speak English really well and read and write in both English as well as the Myanmar language.

It’s also worth noting that while most other countries seem to use the numerals that we are used to instead of the numerals per their local scripts, Myanmar seems to use their own numbers most of the time. There is no need to learn them, but for us it was a fun game to learn to read numbers for things like prices or train schedules.

All that said, the local language is super adorable, plus people get really excited when you take the time to learn a few of their words. Here are a few of the more useful words that we picked up, with the chicken-scratch transliteration that made sense to us:

And, last but not least… people in Myanmar are known as some of the friendliest in the world and they may actually have the best smiles in the world, so the word for “smile” is “mee-enna”!