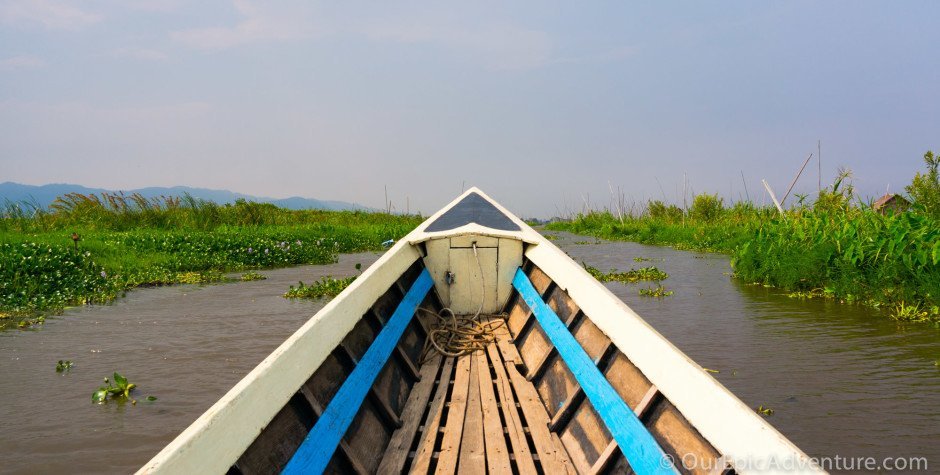 Inle (or Inlay) Lake was a fantastic place to spend a few days, and felt like a travelers’ playground in the best way possible. The town of Nuang Shwe is adorable, the climate was lovely (and so much cooler than Bagan), there were tons of restaurants, and great daytime activities.

We had booked a room at the Aquarius Inn at a friend’s suggestion, but we probably should have just looked around once we got here. The Aquarius is fine – it has a sweet staff, nice garden, good breakfast, afternoon fruit-and-tea snacks, but the room is a bit dumpy. And, even though we paid $35 for a triple room, we may have been able to get a better price or a better room had we looked around a bit.

Wine-drunk, unusual in Asia but much-needed

We arrived on a flight from Bagan and then walked around town for a bit, had a western-food lunch (a much-needed treat), and went to the market.  It’s amazing that tailors here work in real-time.  So, for example, girl longyis often aren’t sewn shut when you buy them, so you can go to a tailor who has a little stall on the street or in a market and pay them $0.50 per longyi to sew it up while you wait.  Their sewing machines are all super old-school and operate by a foot pedal thing instead of electricity.

Then we got a round trip tuk tuk to go to Red Mountain Winery. We considered renting bikes but decided that we would prefer to partake in winery activities and not have to worry about being stable on bikes. Reese very aptly called Red Mountain Winery “stuff white people like” – we started with a 4-wine tasting for $2/person, where we dubbed the wines “adequate but not good” and then the three of us split 2 bottles of the sauvignon blanc, the most eminently drinkable wine we tried, resulting in a pleasant drunk. The winery setting was beautiful and felt more Napa than Asia, and we thoroughly enjoyed ourselves.

The next morning, we woke up early and walked to the canal that crosses through town and hired a boat for a day tour for $15 for 3 people. We were out from roughly 8am to 3:30pm. It was definitely a tourist tour, but also totally worthwhile. On several of the stops of the boat tour, we weren’t sure how much people were actually making stuff and doing their everyday work versus doing reenactments of traditional crafts.

The fishermen were amazing to watch. They have several different ways of catching fish – using bamboo cages and spears, throwing nets, and slapping the water surface with their oars. What’s most awesome is that they stand on the edge of their little boats with one foot and use their other foot to operate their oar, presumably so that their hands are free for fishing.

We passed the floating gardens, where they grow tons of tomatoes in little soil rows with water between them, and villages on stilts with docks in lieu of sidewalks. We stopped by workshops – silver and goldsmith, blacksmith, and a textile place where they use cotton, silk, and lotus. Lotus fiber is incredible – there is a fiber inside the stems that takes a long time to separate out (they told us 15-20 meters per day of work by one person) – but has an amazing texture and quality when woven.

Then we had lunch, during which a storm picked up on the lake and we stayed put for an hour while the restaurant building swayed and we watched lake whitecaps waves and a gray sky. After the winds mellowed, we stopped by the Alodaw Pank Pagoda, where they had several cool Buddhas (including one with wings on his ears). Then we went to a shop with a long-necked lady; traditional beauty here involves stretching a woman’s neck with these huge coil things, but it now seems like a weird tourism freakshow act. Then we made a stop by the famous Jumping Cat Monastery in the middle of the lake. We had heard worrisome things about the cats being mistreated, but when we visited, the lead monk seemed like a lazy-in-the-afternoon dude, and the cats seemed like regular lazy-in-the-afternoon cats.

When we got back to town, we went out for tea and doughnuts traditional Myanmar style, which are heavy and have this corn (or lentil? or sweet pea?) type filling. Then we went out for a few cocktails, at a rooftop bar where we happened to strike tourism luck. On the street, we saw a huge parade that turned out to be for a kid who was becoming a monk. It involved all sorts of music, lots of women and girls in fancy dresses, a dozen motorbikes with offerings, 2 horses that bowed and danced, etc. It was really fantastic, and the pictures are worth more than words.

On our last day, we decided to go for a hike outside of town, with a rough goal of a 3-hour loop that would hit on two cave temples. We ended up with a 4 ½ hour hike where we totally bypassed (near miss) the temples at first. Instead, we passed through an adorable little village, then did a loop of some sort in the hills above the village, where we were effectively walking on little pathways between and in the middle of farms. The views were really pretty and the ground was surprisingly dry considering that there was a hell-bent thunderstorm the previous night that had caused our hotel to shake. En route, we saw a few monks, a few kids, a few farmers & villagers repairing a well/drainage system, and a really large brown snake making his way across the path.

Somehow we circled back down from the farm hills toward this pagoda where they were mid-construction on several standing Buddhas, and then we continued down further and went to a little monastery where there were the two cave temples, an adorable kitten family, and some nice monks who gave us flashlights to use and let Reese take their photos. The temple caves were huge and really fun to explore with a ton of different Buddha statues and paintings.

As usual, here’s a collection of photos from our time in Inle Lake: