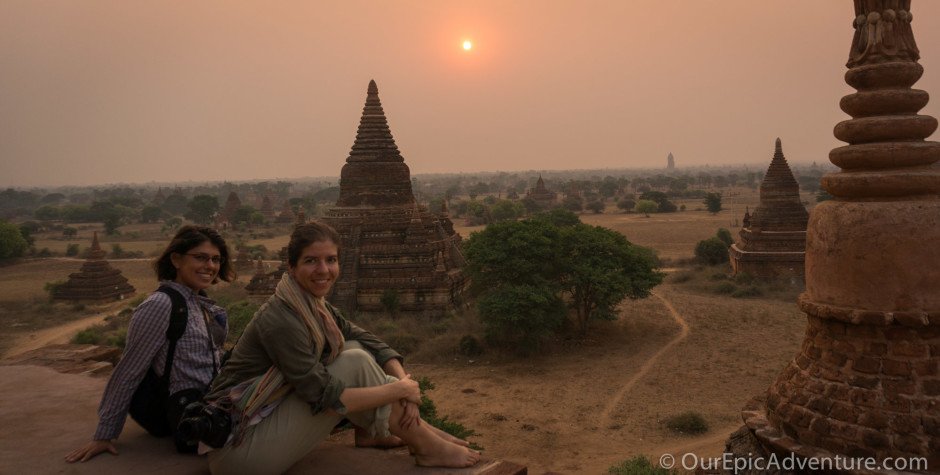 Bagan: An Ancient World in Active Use

Imagine a semi-arid plain, dust devils rising amidst scrub brush, dotted with ancient pagodas and temples… not a few, not a dozen, but thousands. If the road to Machu Picchu had ruins of small town ruins that were once highway-pitstops, and if the temples of Angkor were huge religious complexes transformed into tourism hotspots… then Bagan’s religious structures still draw monks on pilgrimage, and are actively used by Buddhists as well as tourists.

Bagan itself is made up of three town centers: Old Bagan, New Bagan, and Nuang U. Old Bagan used to be the city center for locals, but at some point they were all kicked out and Old Bagan was turned into a city solely for tourism and commercial enterprises. Now, Old Bagan is apparently where the more expensive hotels are. New Bagan was apparently formed by a lot of the residents who left Old Bagan (this all according to a local we met). New Bagan, along with Nuang U, are the two towns where most of the budget and mid-range hotels are. We barely explored Old Bagan and didn’t get near Nuang U, but we had a lovely experience staying in New Bagan and were surprised by the total lack of tourists that we encountered. (A perk of the hot temperatures of the low season for tourism.)

We had heard that Bagan was super expensive, so we prepared ourselves for a splurge and decided to enjoy a few nights at fancier places. We ended up staying one night at the Thiri Marlar Hotel and two nights at the Arthawka Hotel. Both were in New Bagan and charged us $75 per night for the three of us (Mitch, Jewels, and our friend Reese, who joined us for a few weeks), including breakfast, although I think we got a sizeable low-season-discount from the Arthawka. We had heard RAVE reviews about the Thiri Marlar, but were not super thrilled with it. It’s nice and the terrace has beautiful views of pagodas and the breakfast has fabulous homemade jams, but the staff was not exceptional, the AC was janky and we really needed a pool with the heat of Bagan in April.

Conversely, the Arthawka Hotel was stellar. Their staff and customer service was lovely – the manager introduced himself and checked in, the staff would run (literally, run) to make sure we didn’t open doors or carry baggage ourselves, their breakfast was huge (they won Mitch over when they offered fried rice or noodles AFTER he finished his fruit, eggs, and toast), and rooms were lovely, the AC was strong and the saltwater pool was lovely. To note, when we were looking online in advance, other places nearby looked better, but in reality some of the fancier-marketed ones had super dumpy looking rooms and the Arthawka was much better. The only issue we had is that their email and phone weren’t listed for advance registrations.

We had some lovely eating highlights. We were recommended to Starbeam Restaurant in New Bagan, where the food was good and the waiter was fantastic. He came from a jungle province of Myanmar, references the country as Burma, and is eager to practice his English skills. One night we went to Welcome Restaurant in New Bagan for dinner, a fancy restaurant that was marginally more expensive than most places but had excellent food, lots of perks, fantastic service, and was a really classy experience. And, of course, one day we followed the crowds of locals and had afternoon chai tea with these sweet but heavy corn-filled doughnut things (while sitting on tiny plastic stools, as is the Myanmar way). We were also told we had to check out Moon Vegetarian Restaurant in Old Bagan, which did not disappoint.

The three of us – Jewels, Mitch, and Reese – decided to do most of our touring by horsecart, which cost approx. $20 for a half day. With the obscene heat, we preferred to be in the shade of a cart, plus Jewels had a bit of a headcold, plus we had heard that horsecart drivers were getting much less work and much less money since they started renting out electric bikes. More than many other places, in Myanmar your decision on where to spend your money has a real effect, and there is a constant game of trying to direct whom your money will support.

Bagan, to note, is not a UNESCO site, and probably rightly so. There are active reconstructions and building going on, some of which would 100% not fit into UNESCO standards, and several temples have tons of pigeons, sparrows, bats, etc. living in them. This one giant Buddha in an enclosed space reeked so badly of pigeon guano that I nearly gagged.

But more impressively, instead of seeing foreign tourists, it seems like many Myanmar people (including monks) pilgrimage to these sites and that they are actively used for meditation or prayer. Here’s one telling story we heard… Apparently during one of the wars, local villagers took to camping out in one of the temples. Their cooking fires marred the walls and ceilings, so they improved the situation by whitewashing it. With how actively the temples are used by people here, their donation centers collect huge piles of cash, which circles of people count out on the temple floors.

Seeing the temples and pagodas here is an amazing experience. Compared to any of the other ruins we have been to, this is a series of densely packed, small, pagodas and temples. Literally more than 2,000 of them, dotting a dry plain that reminds of me of photos I’ve seen of the Serengeti in the dry season. There are pagodas, old and new, everywhere… in villages, in the middle of town, along the paved roads, hidden away along dirt roads. The temples are gorgeous and each very special places. One morning, our driver promised to show us “the biggest, the tallest, and the most beautiful” of the multitude of temples.

Each structure is incredible in its own right, but the really spectacular thing here is the landscape – you can turn in a 360 degree circle and see multiple, often a dozen, religious structures. Apparently inside each pagoda is something from the Buddha – a nose hair or fingernail clipping, perhaps (the giant Shwedagon Pagoda in Yangon houses 8 hairs). There is a bit of diversity in specifics of shape, color, etc., but there is a uniformity and vastness the site creates by sheer volume.

We watched a sunset over the Irrawaddy River in New Bagan, a short walk from our hotel. There was a really pretty gold pagoda up on a hill, lots of people eating and walking cows and doing laundry on the river banks, and little boats in the water.

For another sunset, we rented a boat ($25 total) for a 3-hour tour of the river from Old Bagan to a cave temple. It was pretty cool – a series of cave passageways, including a tiny little Buddha sculpture, fronted with a big regular temple with a large Buddha plus many small Buddhas.

Another day, we stopped at a local village, which our driver said has existed since the 12th century. A girl (Nyu Nyu) with excellent English skills showed us around – how they make peanut oil, cotton, cigars (and how an 88-year-old granny was going strong on a diet of 2 huge cigars daily), and more about daily life. It is adorable how smitten ladies are with Mitch – he’s tall, has bright red hair, a brilliant smile, is pale and foreign, and he rocks a longyi as well as most local men!

It was absolutely worth a visit, and before we go… we’ll leave you with a photo that we don’t entirely understand, but possibly begs a caption contest:

As usual, here is the full set of photos for your viewing pleasure!