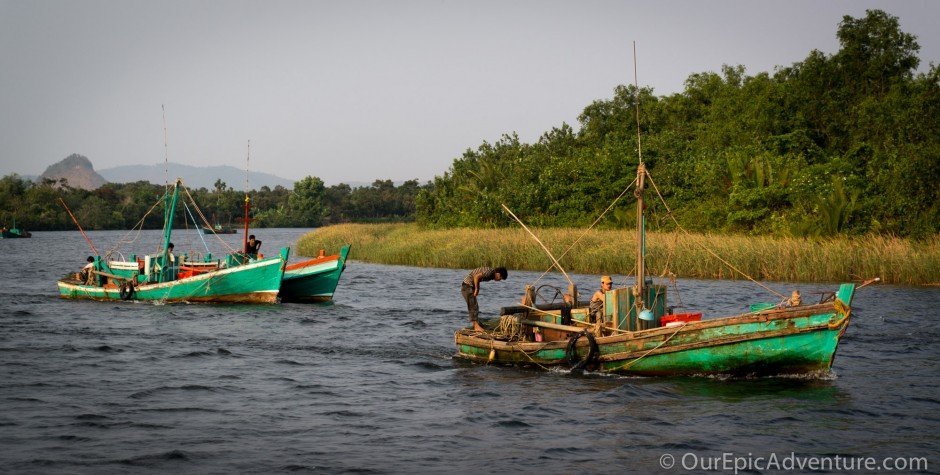 Kampot & Kep, when we almost went to the beach in Cambodia

The southern coast of Cambodia has a few notable beach towns and islands. We almost spent time lounging on beaches – but got distracted instead. We took a bus from Phnom Penh to Kampot, which was quick, comfortable, and uneventful on the Giant Ibis bus company (it’s a shame they don’t go everywhere). Our intention was to spend a few days in each Kampot and Kep, although we ended up staying entirely in Kampot but taking a few day-trips to Kep.

Kampot is an adorable little town whose central traffic circle features a sculpture of a giant durian (no, really). It’s not on the beach by any means, but it is on a river and quite near beaches. We stayed at the Pepper Guesthouse on Guesthouse Road (where a bunch of guesthouses are) and got a super fancy lovely room for $10/night, plus they had excellent breakfasts available. There are cute options 5 – 6 kilometers out of town, with the downside being that you’re 5 – 6 kilometers out of town. Of the places in town, we were quite happy with the Pepper Guesthouse, and we enjoyed supporting the family that runs it.

The town has a lot of stuff going on, but (thankfully after Phnom Penh) has very mellow street traffic. There are a ton of great restaurants and bars – extra props to the cocktail happy hour at Rikitikitavi, the ribs at the Rusty Key, the baked goods at Sisters II and Epic Café, plus the bubble tea place which makes you feel like you walked into a Japanese schoolgirl’s version of Barbie’s dreamhouse.  There are also about a dozen hair salons.  Jewels attempted her first SE Asia haircut and got only somewhat butchered.

The Kampot market was fascinating. At first we were disappointed that it was dominated by clothing and jewelry (as many markets here are), until we saw the food sections… Live chickens, dead chickens, chickens being killed (some requiring 2 takes because of the dullness of the knife). Same with ducks. Crabs, eels, fish – both alive and dead. Dried shrimp. Pepper – lots of Kampot pepper. This weird brown mass that may have been either pepper paste or fish paste. “Normal” fruits and veggies interspersed with green papaya, green mango, dragonfruit, durian, tamarind, and a variety of things we didn’t recognize.

One highlight was a sunset boat cruise which leaves at 4pm every day in front of Rikitikitavi’s bar (just go there 5 minutes in advance) and is $5, including a free beer (additional beer is $0.75/can). The 2 ½ hour cruise is on a crazy catamaran with air plants and comfy deck chairs, plus a bar. We passed by some of the other “river cruise” boats – and we are so happy we chose this one.

On the cruise, we crossed under the three town bridges (old, new, and rail). We watched the “fleet” of fishing boats heading out for a night of fishing; manned by 2 men/boys each, the boats followed each other like a string of beads down the river. We took a swim. That is, I practiced doggie paddling 5 feet from the boat while Mitch held an inner tube and Mitch attempted back-flips off the 2nd story of the boat while the setting sun sparkled on the water.

One evening, we saw an incredibly ornate and overdone wedding with multiple tents, a stage and performers, and a whole wall of speakers. The giant cake was heart-shaped and the first piece was cut out in the shape of a heart. All the women wore sweet-16-style gowns and the men wore slacks and tucked shirts. Some of them arrived with the ladies in lace and rhinestones perched sidesaddle on the backs of mens’ motos. It’s wedding season here so you often see a wedding tent pop-up in the middle of a street (where else would you have a wedding?), but this one was over the top.

We also need to note that among the poorer and even middle class families, it seems en vogue to let the little boys shirtcock. The little girls are fully dressed (probably for modesty’s stake) but there are an extraordinary number of shirtcocking little boys, probably in the 3 – 5 age range. We didn’t take any photos for obvious reasons.

One day, we rented a motorbike from Tree Travel. We drove up to Phnom Chhngook Cave, where we gave one local kid $2 for a tour and a little girl $1 to watch our bike – we enjoyed giving a bit of extra money to kids who were trying to work and practice their English. The kids’ English was amazing and they clearly wanted to practice – plus they were quite knowledgeable and had very mature conversations. They may have raised our confidence in the future of this country… and the world.

The cave itself was super interesting. There are some natural animal-esque formations in the rock (crocodile, elephants, etc.) with little offerings in front of them, as well as a larger temple built inside the cave around where a stalagmite and stalagtite grow toward each other; the kid said the temple dates back some 1300 years. The way the construction is built to highlight the stalagmite is representative of Siva and Shakti, another symbol of the animism/Hinduism/Buddhism blend in the history here. Our guide friend led us through a back way descent out of the cave – the whole thing was huge and cavernous, with little openings along the top letting light in. We went through a series of little areas and passages and caverns, including an area with a ton of bats. Then, we climbed out another exit area.

From the cave, we drove to the Secret Lake, which is a reservoir with a dam and some channels bringing water out. One of the pumps we saw was housed in a little bungalow on the water – adorable aside from the noise of the genny and the oil slick on the water.

It is amazing that there is such a culture of littering here; people don’t bother throwing trash out. So, in addition to oil slicks on water, we saw bunches of cows grazing on dried up rice paddies that were dotted with plastic bags.

Kampot is famous for its peppers (peppercorns – black, white, red, and green, although the green can only be eaten fresh and not dried) and is going to start having a geographic indicator for them. So, when we saw a sign for a pepper farm with restaurant, we decided to drive over. It seemed overpriced and empty with no tours, and more mango trees than pepper, so we decided to keep driving onward to Kep for lunch.

While Kampot is a fun town to hang around, Kep is known for beaches and crab (there’s no town to speak of). They’re 45 minutes away from each other by bus and 20 by motorbike. We only spent a few hours in Kep, but it seemed sufficient to check things out.

We had two meals at the crab market. Kimly is apparently the best place. We tried squid with coconut sauce, sting ray (the dark meat of fish), and crab with Kampot green pepper, which came with a phenomenal dipping sauce – a bowl full of cracked black pepper in fresh lime juice. Plus, from one of the vendors outside, we bought a delicious squid on a stick. Tentacles!!!

Toward the end of our first meal at Kimly, we met and had insta-bonding with a garrulous, friendly, and 2-sheets-to-the-wind group from Singapore. Chris, at the center of their network, was a pleasure of a person, warm-hearted but with a big loud personality. He spouted words of wisdom between show tunes – money is temporary, you need to make friends when you travel so the world becomes smaller, etc. Hopefully we cross paths again.

Along the beach area, you can rent hammocks to chill out – but for some reason the hammocks are more in the road area than the beach area. It’s weird. Mitch went for a dip and we both enjoyed reading by the water.

We encountered a bit of a hubbub because a troupe of monkeys was hanging out and eating peanuts that people gave them, climbing all over this one dude’s moto and checking themselves out in the rearview mirror (they clearly knew him).

Our last day in the area was an interesting semi-bust of a day. Our intention was to go to Rabbit Island and overnight there. However, the owner of the pier to Rabbit Island had a daughter who was getting engaged, so he shut down the whole pier for the day – so there were no boats, public or private, that would give us a ride to the Island. No Rabbit Island for us, but other people say it’s really nice.

While we were walking around (not on Rabbit Island), a few adorable kids ran down a hill to play with my hoops. The old villas in Kep are pretty interesting. Along the roads are these old stone walls that hint at a time of decadence, apparently large old French villas that fell to ruins with the rise of the Khmer Rouge. It sounds like there may be some attempts to restore some as fancy homes or hotels, but for now the ruins are home to poorer Cambodians who seem to be squatting. The 3 little girls who played with my hoops had scampered down the hill from one of them, and it seemed that their whole family lived up there.

It can be difficult to come to terms with some of the poverty here, and the various issues that come with it. But, at the same time, you often see grandiose homes next to shacks, or kids who play at begging for money but then are clearly not beggars the moment they step outside. Those little girls were super impoverished, and so excited to play with my hoops and skip with us toward the town. Another day, we watched as a father sent his kids into westerner restaurants to beg, and as a mother threw rocks (literally) at her toddler child when he was holding onto money from begging. There is so much to learn here, and so much of the culture that is so completely foreign to us.

As usual, here is the full set of photos: