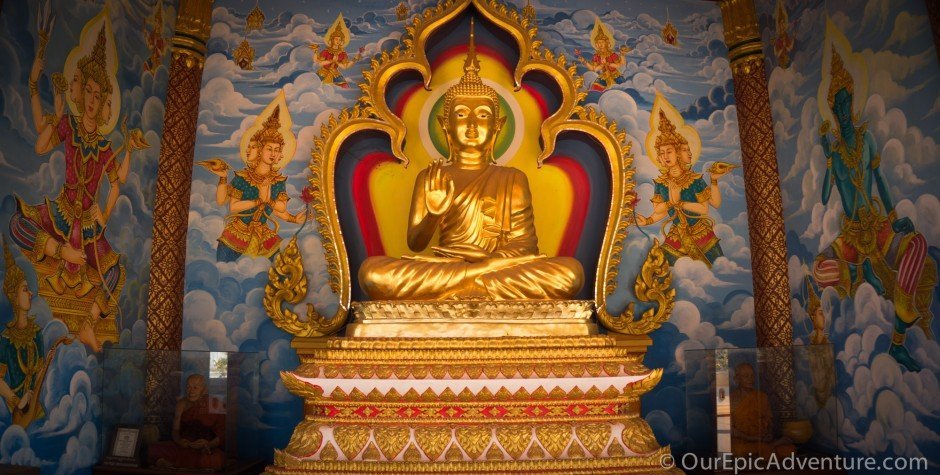 Right on the Mekong River and just across from Thailand, Vientiane doesn’t seem a hopping capital city, but it has a slow pace, chill vibe, and great food.

Last Saturday, we took the night bus from Luang Prabang to Vientiane, which was fascinating. (We decided to skip the beautiful nature but overwhelming backpacker scene in Vang Vieng.) The whole bus was packed – thank goodness we both are thin, not claustrophobic, and there were no accidents (there was a lack of emergency hatches). There are effectively 2 rows of bunk beds that are somewhat bigger than twin beds and each for two people (yay for traveling as a couple, otherwise you get intimate with a stranger), with a VERY thin aisle down the middle. We were advised by friends to always go for bottom level on the sleeper buses and trains since the top ones don’t entirely have a guard rail – smart. We were lucky that the bus never broke down, and the trip was 11 ½ hours (estimated at 8 to 10).

When we arrived in Vientiane, we got a shared tuk tuk into the center to find a place to stay. We ended up at the Soukchaleun Guesthouse, a green townhouse-looking building on the main road (Setthathailat or something), right in the center of the tourist area. For a great price ($10 USD), it had decent rooms, a private balcony (even having windows is a rare treat here!), a bathroom with hot water, a mini-fridge in the room to keep your water cool, as well as wifi in the common area downstairs. They did our laundry same-day, and come in daily to change the linens and towels. Also, their staff is adorable and likes to practice their English.

Vientiane has excellent food and we plan to remember it for the next few months. Croissant D’or (two locations in the main tourist area, we liked the vibe of the smaller one) had great breakfasts and treats like almond croissants. The bubble tea joint right on our corner was exceptional, the coffeeshops offered great air-conditioned ways to spend time working (True Coffee had these awesome not-sweet green tea cream slushie things), a few bars offered cider (among the more exciting things for me right now), and totally solid food options included falafel, pizza, Indian, etc., in addition to Laotian food.

We effectively spent one day exploring by foot and the other by motor bike. We took a long walk to Wat Sisaket and another nearby wat (temple), where they had the regular temple buildings plus a bunch of effectively mini-mausoleums for ashes, which were quite pretty and tasteful, as well as little lockers in the exterior walls for regular folk. Across the street was the Haw Pha Kaew museum, which had a large collection of Buddhas (what else). All of the buildings are just incredibly stunning.

Then we walked up to what is marked on a map as the market, which seems to have been replaced by a shopping mall. It is effectively what you would expect from the crowded stalls of a street market in a western windowless mall building, plus Buddhas, and heavily weighted with cheap electronics. We walked up to Patouxai, which is a large thing at a traffic circle reminiscent of the Arc d’Triumph or Washington Square Park’s arch. We stopped in at a gorgeous technicolor recently constructed / still under construction giant Buddha temple situation, which we think may have been called Wat That Foun. The signage said the Buddha plaza was finished in 2013 and cost over $200K USD. It was spectacular plus had weird realistic wax statues of deceased monks in glass tanks. We also passed by the US Embassy, which is a heavily guarded militaristic looking complex and seems like a symbol of our country’s bad rep internationally.

The next day, we decided to rent a motorbike, since that is apparently the best way to explore SE Asia.

We took the bike out to the Buddha Park, a bizarre collection of concrete Buddhist and Hindu deities, plus a giant climbable heaven/hell/earth structure, that is a 1 ½ hour (very slow) drive from town. The description in the Rough Guide was brilliant. “Surely Laos’s quirkiest attraction … created under the direction of … a self-styled holy man who claims to have been the disciple of a cave-dwelling Hindu hermit in Vietnam … Besides the brontosaurian reclining Buddha that dominates the park, there are statues of every conceivable deity in the Hindu-Buddhist pantheon and even a handful of personalities from the old regime.” Awesome.

We also drove out to That Luang, a giant gold Stuppa and Laos’s national symbol. It has a long history of destruction and reconstruction, plus old Khmer statues and a variety of Buddhas with all their offerings (not unlike the roadside offerings in South America with soda, cigarettes, etc.).

Apparently here they mostly have semi-automatic motor bikes, which have gears but no clutch. As expected, Mitch loved it and was immediately a total pro. I tried my first bit on a pot-holed dirt road and discovered that I’m decent enough at going, switching gears, and riding curves, but bad at stopping, starting, and turning. Only one way to improve…! I got an adorable lesson from a well-intentioned Laotian man who explained that the gears are labeled “1, 2, 3, 4” and when I change gears, the bike goes “vrrroom vrrroom” (the quotation marks indicate the only words that were actually communicated in a common language). While I was driving and Mitch was on the back, we got oh-so-many dirty looks from other motorists. These crazy falang women!

As usual, here’s the full collection of photos: