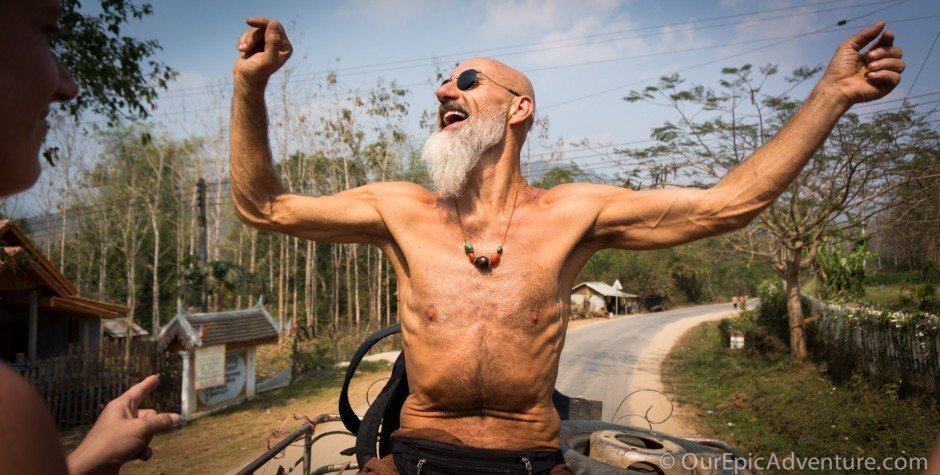 For the first month of our Asia travels, we were not actually in Asia — but rather in a little bubble of hippie paradise. Before we left, we had asked a trusted friend for advice on a Thai massage school in Thailand, and were told that what we should do instead is go to the Circus. About 8 years ago, well known and respected Thai massage teachers decided to create a month long program to focus less on techniques and more on the principles behind them, where they would inspire students to find fluidity and creativity in their work as healers. Most of the 40+ students in the program had a strong Thai massage background; many are well-skilled professionals. We came in with much less experience than most but had a deeply fulfilling month.

Thai Massage Circus is on a piece of land about an hour away (but remarkably only 25 km) from Luang Prabang, which is a beautiful little city in northern Laos. While we experienced both simultaneously, we will try to post about Luang Prabang and local attractions separately. The circus is a 15 minute walk from the gorgeous Kuang Si waterfalls, and the land itself is sandwiched between two streams with a series of small waterfalls. All of the students live in tents, little huts, slightly larger two person huts, or dormitory buildings – all of the construction is local bamboo style. We had the best hut, with a little bathing spot right behind us and the sound of the stream cradling us to sleep each night. There are a few common covered platforms for hanging out and eating, a kitchen whose amazing staff created three delicious vegetarian meals each day, and the temple – a large covered pavilion where we had all of our classes. The bathrooms were communal, a few well-kept and clean squatters, and while there were showers, we just bathed in the stream.

There is a steam sauna that typically runs twice per week near the beach (the main swimming hole in the stream), and several fire pits for nightly fires and chant circles. The land is also a little farm, owned and operated by a friendly Laotian man named Hom Peng, with a few rice paddies (which we helped plant one day) and lettuces, as well as a few broods of chickens and a pair of very chatty ducks who are inseparable and quack and waddle their way through the days together. The land is surrounded by farms and jungle, beautifully silhouetted until the sun crests the mountains around 7:30am, and dotted with banana and papaya trees.

The roofs on the unenclosed buildings kept them remarkably cool during the heat of midday, but were unnecessary for rain. When we awoke each morning, everything was moist from the mist, but it didn’t rain once and apparently has not rained in months. Winter usually lets up right at the beginning of February but this year trailed onward quite a bit. The afternoons were hot, but the nights were quite cool and we slept bundled up with wool socks and hats for the first half of the month.

Each day would begin with a singing bowl being struck to wake people up at 6am. There was an optional meditation at 6:30 followed by yoga class (Anastasis’s unique Zorba yoga) at 7 until breakfast time at 8:30. Occasionally there would be other classes during that time – a brilliant handstand workshop with Jason, and what was apparently a lovely singing lesson with Lulu and Mischka (I sadly was sick and missed it, so my singing voice is as tuneless as ever). Sometimes we would skip meditation and yoga to walk up to the waterfall, which opens to the public at 8 and is beautiful, peaceful, and unlocked before then. The walk to the waterfall was quite lovely – we could shortcut from the back of our camping area through an abandoned rice paddy where water buffalo would sometimes graze. In the dim dawn light, it looked like something out of a mystical story.

One afternoon, we all walked up to the waterfall together instead of class. The teachers intended for us to massage strangers to practice, but we ended up hanging out, singing, dancing, hooping, acro-ing, and modding t-shirts (I became the t-shirt lady at circus and modified about a dozen for/with people). Good times!

After breakfast, we had class from 10am to 1pm. Then lunch followed by a break, with class resuming typically from 3:30 until 6:30pm. Morning class always began with a Buddhist invocation, and each half-day class would have a different theme or focus.  The class topics ranged greatly, from practicing with an emphasis on the principles, to specific techniques for various body areas, to philosophy or anatomy, etc.  Even with careful practice and study, it would (and will) take an enormous amount of time to master even 50% of what we learned.

Our teachers were incredible, and brought different and magnificent skills to the Circus. Arno, who created and leads the circus, is a rare gem in the Thai massage world with extraordinary knowledge, a perfectly honed touch and understanding of the body, good (if not sometimes sharp) critique, and quite a way with words – “we approach the belly like a scared little animal”, “I will show you the details but I know you will forget”, and “you can touch your tendon like you would a mango or a Camembert”. Kaline is like a blend of a giggling 4-year-old who is enthralled with the world and a priestess who can speak from the depths of many religions and traditions. One special day, the teachers washed all of the students feet, and Kaline taught me that not only can you touch someone lovingly, but that with your touch, you can become a conduit for pure universal love.

Tod has an exceptional anatomical knowledge base and range of experience, and an infectious passion that comes through in his teachings; it seems almost that his spirituality came from a marvel of flesh and blood. He is quiet and enjoys his own space, but has a perceptive eye to give critique and guidance. Itzchak is grounded with strong and precise technique, and his philosophical knowledge and open hearted spirituality take a few days to realize but underlie his presence to the core. Anastasis presented yoga classes and was fully present always in his goofy-serious-lovable-quirky way. As he said our first or second night there, looking up at the waxing moon, “the moon smiles so big over the circus!” We were also joined for a couple of days by Jack Chaiya who comes from a strong lineage in Chiang Mai and shared so many techniques that seem simple but would take many moons to master. As for the teachings, for now let’s just say that we were left with much to practice and a thirst to dive deeper into this tradition.

After class was over each day, we would have dinner and then gather for a campfire and conversation or chanting, unless it was a sauna night or a day off. We had a few official kirtans, led by Lulu and Mischka, and on the full moon / Valentine’s Day we had a bonus kirtan party. The last night, we had a little talent show MC’ed by Pau with Niss as a brilliant clowning sidekick. There were many special moments, but a song from Luke took the cake… “We are the Circus people, we come to you in peace. Some say we are angels, others say we’re freaks! We touch you with our elbows, we touch you with our knees, we touch you from our hara… Sabaidee!” Amazing. After the talent show on our last night, we had the opportunity to write something we wanted to release on a little piece of paper, then we sent paper lanterns up into the night sky and let go.

Speaking of special days, the first day of the Circus (the travel day) was Mitch’s birthday, so we smuggled a big cake there without him knowing and sang him happy birthday around the fire – he may be quiet but his was the first name everyone knew!

The food as fantastic, with huge kudos to the kitchen crew (lead chef Mark, Palma with his deep Italian bloodline in charge of the brick oven, Tash, Zoltan, and a few local girls). Breakfast was oatmeal, rice porridge, eggs, and fruit in some combination, with occasional treats (fresh bread or pineapple cakes) from the oven. After Palma was up from 10pm to 8am making bread for a special breakfast one night, he brilliantly declared “you see, one man in one night can make many girls happy!” Lunch and dinner were usually a soup, curry, or stirfry with rice and salad (Mark’s specialty is salad dressing – apparently he is going to start mass producing and marketing it in the states… If we are lucky!). Sometimes there would be Pad Thai, papaya salad, fresh spring rolls, or Mexican style with black beans and salsa, or Mediterranean with fresh pita and hummus and baba ganoush, or Indian with naan and saag paneer. For a few special occasions, they would make coconut chai tea for a kirtan, or other special goodies. People would get chocolate stashes on days off in town, which would sometimes be shared in the evenings.

Amazingly, in this type of environment no one got sick from the food (except a few people who ate Laotian barbecue in town). That said, we had a few bugs that raged through the camp and touched almost everyone. Thankfully, for most people the illness was super short lived, and we purged whatever it was that needed purging (and for the few people who had a more serious issue, they are all mended). From a personal perspective, you never value having long Achilles’ tendons more than when you have diarrhea and the toilet is a squatter!

We had every Saturday and Wednesday afternoon off, which could be used to go into Luang Prabang to get an internet fix (there is no internet at the Circus, a much more enforceable rule than no alcohol), walk up to the waterfall, butterfly park, or village, or just hang out at the Circus and practice yoga or massage.

We have not yet written about the community, and there are not enough words to describe how beautiful and multifaceted this group was. People who want to give this style of massage are innately givers, people who open up from the heart and enjoy the act of giving to those around them. Within those, the Circus attracts people who are creative, untraditional, and want to push their boundaries. It is rare to be with a group of people for a month and to genuinely be interested in and enjoy the presence of every single individual, but there is not a single person there who was not a beautiful soul and inspiring teacher in their own way. As always, this community will scatter and the feeling of a insular family bubble will pop, but we will always welcome every single member of this family with open arms and an open heart.

To everyone at the Circus, we offer our unending love and bottomless gratitude.