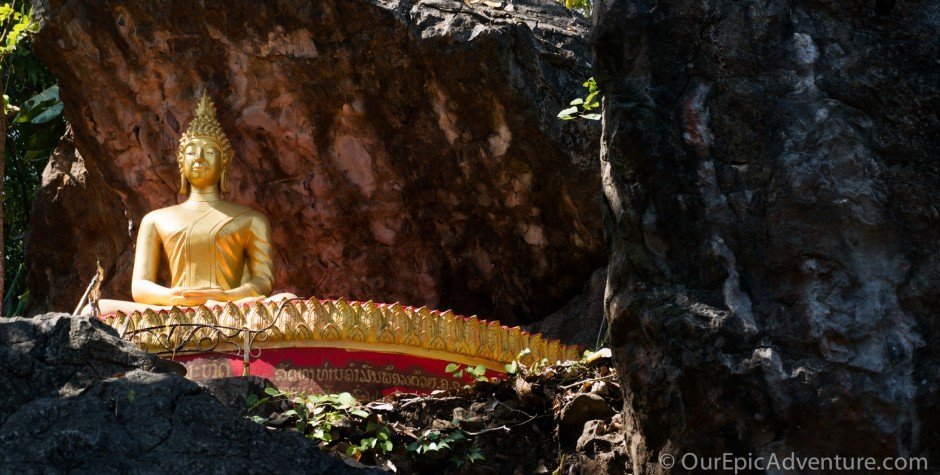 Our surprising landing point in our Asian adventure was the city of Luang Prabang, Laos. A UNESCO site famed for its preponderance of temples, it’s quite charming although overrun with travelers. We spent a month at Thai Massage Circus an hour outside of Luang Prabang, so we were in the city for a few days before and after as well as on our days off from the training.  We will post separately about our experiences at the Circus, but obviously there was a lot of overlap for us.

We stayed in three different guesthouses; it’s super easy to book a guesthouse on arrival and there are tons of cheap ones clustered together (literally, every single building is a guesthouse). When we arrived, we had pre-booked a room at the Mekong Moon Inn and reserved for them to pick us up from the airport (the room was $25 USD and the airport pickup was $7 USD). To note, transport from the airport into town should be about 50,000 kip ($6ish USD), although we met people who were charged 4 times that. The Mekong Moon Inn was obviously not as nice as pictured and was overpriced for what it was.  The building seemed nicer than many other guesthouses, and the bed was much nicer, but we were amazed that for the price we paid they did not give us a window room. The shower situation was also bizarre – it was a tub with a handheld shower head, so you essentially had to squat and wash yourself that way. Regardless, we had an epic sleep after our 36 hour journey from South America, and then the next morning went off in search of a different guesthouse.

It was the Chinese New Year (which meant street parties for the locals with lots of loud Laotian karaoke), so guesthouses were in high demand. We ended up at the Chanh Tha Phone Guesthouse a block away from the Mekong Moon and on the block behind the Joma coffeeshop. For $16/night, we had a private clean room with an oversize bed, private bathroom with hot water, fast wifi, free bananas, and a lovely hostess who speaks a few words of English.

After the program, we spent a night at the Souksavat Guesthouse, which was about 4 buildings away from Chanh Tha Phone and the same price. The quality was a smidge nicer, and there was an extra bed to lay out our stuff. The only problem is that, while we were excited for a hot shower after a month of glorious baths in the river, in the morning there was barely enough water pressure to shower, let alone trigger the heater! The other nice thing is that they booked our onward travel bus ticket for us. Their markup was substantial, but worthwhile on the time and cost savings of going round trip to the bus station and included a free pickup and luggage storage at the guesthouse until our night bus departure time.

The town flanks the Mekong River, and the main / most touristed area of town is a little peninsula between the Mekong and Nam Khan rivers. There are a ton of wats (temples) — everywhere — with beautiful structures, ornate wood carvings and gilded areas, and tile work. It’s free to wander into most temple grounds, although a couple charge a minimal entrance fee. The Wat Xieng Thong at the end of the peninsula was pretty impressive, and we were most excited by the ginormous art car that was housed in one of the buildings. But it’s totally worthwhile to walk into any/all of the wats to check out the buildings and grounds.

To note, we didn’t actually go into the national museum, but loved wandering around its grounds – the main building is spectacular and in much the same style as the temples.

At least at this point, I continue to be amused by how many monks we have seen hanging out with a coca cola, snapping photos on their smartphones, etc. We need to learn more about how the system works here — there are tons of really young monk novices (like 5 years old in orange robes), and I am not sure if it’s something that all young men do, if the parents pay the temples and they use it to make money, or if it’s a way for parents to effectively unload the cost of having kids for a while. Especially coming from our hippie spirituality in the US, you end up romanticizing Buddhism, and it’s fascinating to see and start to learn about the realities of daily practice. For example, women have to be reincarnated as men before reaching nirvana, and in daily life it has become taboo to hang women’s laundry higher than men’s laundry (WTF). As usual, every little thing you learn just makes you more aware of how much more you have to learn.

One of the must-see temples / spiritual attractions is the Phou Si Hill. (Everything in this town is called Phou Si, pronounced Pussy. So the main spiritual hill is pronounced Pussy Hill, the main market is Pussy Market, etc. But as usual, they are all spelled totally differently, and the ph sound here is like an aspirated p, not like an f.) Phou Si is a collection of temple buildings and incredible gilded statues on top of the main hill in town, plus a great view of the city. It’s recommended to walk up the northern stairs (closer to the end of the peninsula), and come down the southern stairs. That way, awesome statues break up the walk uphill and you can do the 300 stairs downhill in one go. The statues are stunning; my personal favorite shows a few young disciples learning from their teacher. There is also a little cave, a big Buddha footprint, etc.

Each morning, there is a collection of alms by the monks that has become a favorite for tourists – and for us, jetlag was very useful in being able to see it (if you’re not up and jetlagged, it would mean going to the main street around 6am). The monks all walk down the streets in a line, each holding a basket for collections. Local people line up along the edges of the street, bowing down on their blankets, and reaching up to give the monks sticky rice, fruit, and other things. We had heard that it was very touristed, but did not expect the paparazzi-style showing.

There were tourists offering alms with their friends photographing, tourists getting up in the monks faces, etc. We tried to just observe and snap a few photos from across the street where we could be discreet, but it was a bizarre experience. Also interesting was that there were beggar children (and some adults) to whom the monks gave some of their food, so it almost was like charitable giving from the alms-givers to the local poor that passed through the hands of the monks. There was one woman who put out multiple cardboard boxes for the monks to donate into, while she semi hid behind a car and then consolidated the boxes at the end. It was all very odd.

After we saw the morning alms giving, we walked through the morning food market. In addition to an array of unrecogizable local produce, there were some bizarre animal products: what looked like little grilled rats and tiny birds in little cages (that people can buy and release as religious offerings).

Comparatively, the night market takes over the main street from around 5pm to 10pm (the whole town has a curfew at 11:30pm). The night market was horribly tempting with all sorts of awesome artisanal goods and I’m glad that we are on a strict no-buying rule, although I kind of wish we had bought a boxful of things and mailed them home for presents and use later on. We did buy a couple of pairs of pants for Thai massage, but there was a broad array of awesome things. To note, people are really quick to bargain and the appropriate price seems to be roughly 2/3 of the original ask.

While we were in town, we also got a fish massage! It was about $4 per person for 10 minutes and an amazing experience. The ladies clean your feet and then you stick your feet into a fish tank, and the little fishes go into a frenzy eating the dead skin off your feet in a very sweet but ticklish sort of way. It’s very gentle, and I think both our feet could have used a half hour of it, but ten minutes was quite nice and our feet felt well-buffed afterwards.

About an hour outside of town (but remarkably only 25 km) is a collection of awesome things that are worth a visit. Lucky for us, we spent our month at the Circus a short walk away. The Kuang Si waterfalls are beautiful to experience and go for a dip in, and (for us) practice yoga at before it officially opens. Some of our friends have put it on their “favorite places in all of Asia” list. I’m not sure we would go that far, especially with the midday crowds, but it is absolutely worth a trip.

At the falls (and covered by the same $2.50 admission) is also a moon bear rescue sanctuary; the bears are so adorable, nimble, and playful! The sanctuary seems to be legit, and it is shocking how awfully these bears are treated by bile farming operations, especially when you see how sweet they seem.

Right near the waterfall (if you walk 5 minutes back through the little village) is the Kuang Si Butterfly Park, which just opened about two months ago and is the baby of a lovely Dutch couple who fell in love with the land and wanted to create a project to emphasize nature preservation. It’s about $4 USD (30,000 kip) to enter and worth a trip: they have a lovely little cafe, beautiful grounds, and spectacular butterflies that are all found in the wild locally. My only issue is that my caterpillar-phobia left me with nightmares for days, even though I tried to slowly acclimate myself and approach with caution (and hiding behind Mitch). Unfortunately, he wanted to post one of the caterpillar photos here, so I won’t look at this post after he adds that image.

Luang Prabang is known for its French historical influence and apparently has several good French restaurants in town. We didn’t go to any of them (aside from the French bakery, where the ice cream was more notable than the croissants). But, thanks to the French influence, you can get a fairly decent crepe for about $1 on the street, especially in the evenings. Where we did go repeatedly was a great Indian restaurant right on the main drag, with exceptional curries (the 9 vegetables is ridiculous) and garlic naan. We ended up going to Utopia a couple of times, where there are a ton of travelers, a great vibe, a decent cider on the menu (what?!), and overpriced and small portioned but tasty food. There are a bunch of restaurants on the Mekong, which seem to be not very good but with a beautiful view (note, two of our friends got food poisoning at the BBQ place). We also loved the juice and sandwich stalls that are on the main street every day. Our favorite combos are (1) passion fruit, pineapple, lime, and (2) mango, ginger, mint. Yum!

Per usual, all the photos in one place for your viewing pleasure: