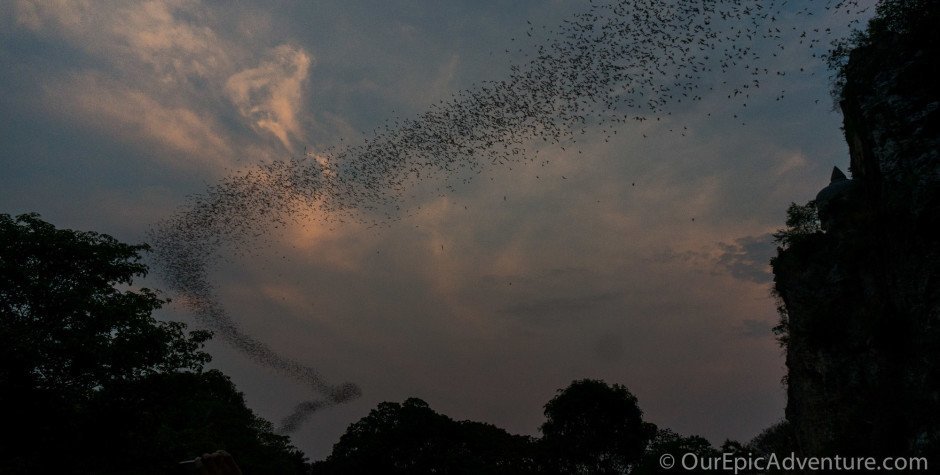 A remarkable sight: millions of bats stream into the night

A worthwhile detour to Battambang, Cambodia

Battambang isn’t on the usual tourist circuit, but we are so glad we went. It was a great learning experience about some of the harsh realities that many locals face, as well as an opportunity to see some astounding natural wonders.

When we got to Battambang, we learned why tuk tuk drivers can be so aggressive: apparently the first one who talks to you “owns” you. So if you ask one guy at a bus station about a price, anyone else who ultimately takes you to your guesthouse will have to go through the first dude and/or pay him a commission. This extends to any further trips. We met a tuk tuk driver who we liked and wanted to hire for a daylong tour, but we couldn’t go with him because a different guy had picked us up from the bus station, even though the bus station guy was overcharging and had a bad attitude.

We stayed at the Seng Hout Hotel, a large and conveniently located hotel with a pool on one of the decks, clean and lovely rooms, and a competitive price. We paid $10/night for a fan room, which ended up being a bit too warm one night but was acceptable and had a surprising amount of natural light for the small windows. Plus, we had access to a rooftop pool, which was shallow and clear, so I’ve been making a dedicated effort to teach myself to swim.

There are a few decent restaurants and activities in town. There is one place that makes hand-pulled Chinese noodle soups; $1.50 for a bowl of noodle soup, it was a highlight. I also was excited that a bar/restaurant/gallery had two types of good cider on the menu, each one only cost about twice as much as the noodle soup. Everyone told us to check out the Phare Circus School show, which runs twice per week and costs $10, plus $5 round trip for a tuk tuk. The show was super fun and very skillful (aside from the hooper, but I get hyper critical). It’s a training opportunity for disadvantaged youth and was definitely worth a visit.

One night we ended up having a long conversation with a waiter at a local restaurant after dinner. He approached us with confusing questions about English: what’s the difference between abbreviation and acronym? Study and learn? He is 25 years old (but could pass for 16) and is one of six children. It sounds like he is effectively an indentured servant at the restaurant — he sleeps there and eats there, but has not gotten paid money in four months. In his questions about English, he asked us to describe the words that we feel when we didn’t get paid for four months; we weren’t sure how to respond. He just started university for his Bachelor’s degree, and his sister who works a factory job in Phnom Penh is helping him foot his tuition bills of $250 – $400 per year for four years (by comparison, people have told us that $120/month is a really good salary in Cambodia). The other university students are mostly funded by parents and make fun of him, but he also is committed to learning and advancing. You can never be sure how much people are trying to play tourists to sponsor their education, or the education of one of their children (which seems to happen frequently), but it was an interesting snapshot of his life.

We spent a bunch of time with one of the co-founders of CFI, Children’s Future International. We had been introduced to the organization because we know the other co-founder, and have gotten travel advice and chatted a bit about nonprofit fundraising with him in the past. It was great to see some of their work on the ground. We spent one afternoon watching the soccer finals in a field behind the defunct Battambang Airport for a local league their kids are in and another afternoon at their center about 15 minutes outside of Battambang. I have to admit that from what we heard before and their information on the web, we didn’t fully grasp what they do or the power and critical nature of their work.

It’s an incredible organization, and impressive how much they have done. CFI started 4 years ago helping 60 kids and now work with 230 kids. From my understanding, their team identifies kids to help – those who face the most challenges and are the poorest of the poor – and do whatever they can to ensure that those kids get the education needed to help them find a way out of the cycle of poverty. Their programs include residential programs (for kids who need it), at-home support (even rice supplements), health care for kids and family, social workers who monitor the kids and check in on them at home, a library, and a robust school program that includes classes in Khmer (the local language) and math for the younger kids and English and computer skills for the older kids, not to mention that they provide a safe space and a sense of self-confidence to kids who otherwise would be considered lost by the system.

There are so many crazy stories we heard there about the realities of the community in which they work. Here is one nugget that won’t leave my mind. They recently brought a few new girls into their residential program whose mothers wanted to sell them for as little as $200. The girls were as young as 7 and you know exactly what they would be sold to do.

We had one super touristy day in Battambang. We connected with these two Americans, Aubrey and Rich, for a day-long tuk tuk tour. Rich has been living in Sihanoukville (in southern Cambodia) and Aubrey is 3 days into having moved to Cambodia and is getting a glimpse of the country before they go to Sihanoukville.

They are colorful characters, and while we were initially apprehensive about touring with them for the day (first image: Rich is 6’4″ with a “love” tattoo across his neck, and wearing a tank top, flat-brimmed hat, and serious necklace), they turned out to be amazing… Super sweet, great attitudes, fun to explore with, and a constant stream of chatter. Our driver’s name was Dara, which means star; he was super great. (If you need a tuk tuk driver in Battambang, you can email or call him at: (+855) 12 77 67 69.)

The day started with the bamboo train, which seemed lame when we read about it online but was decently fun. You sit on this little bamboo platform on a single track train and go at remarkably fast speeds through pretty countryside for about 15 minutes. Then you get off for 15 minutes while locals try to sell you cold beverages, before getting back on and going the other direction. When another train needs to pass, one train gets disassembled to let the other one by. It’s a cute tourist thing for $5/person.

We passed through a variety of adorable villages and pretty scenery, stopping for cane juice and a gigantic watermelon, that Dara purchased for ¼ of the foreigner price, and a tree full of giant fruit bats hanging so they looked like big dead leaves, with faces, flapping in the wind. We were going to stop by Cambodia’s one winery, but the wine apparently tastes like turpentine (according to both our driver and the guidebook) so we skipped it.

We went to Wat Banon, an Angkorian temple ruin on a hill. After climbing up about 300 stairs in the midday heat, it was incredibly beautiful and peaceful, and made us excited to explore Angkor Wat in a few days. Photos tell it better than words.

After, we made a stop by the Killing Cave, which was not too impressive but was – as usual – a haunting reminder of Cambodia’s not too distant past. Up the hill from the cave is a temple series that is multi faceted and quite beautiful, with both Hindu and Buddhist statues, and temple buildings in a variety of styles.

We had a somewhat awkward conversation with a monk – he learned the word “up” (he already knew “down”) and taught us the Khmer word for “bat” (the animal). He brought us down to this cave / glen. Hidden underneath a gold-gilded temple and accessible via a back stairway, you can stand inside of a big rock cavern and look out onto a lush green forest opening, or curve underneath the rocks into a little cave alter – it was an absolute highlight for us. Takeaway: always follow when a monk invites you. Also, I was worried about being appropriately respectful, but the monk was super chill. We asked to take a photo with him, and he said yes and then wanted to check it out (including zooming in on faces) after.

The last stop was the Bat Cave, which goes on the list of most awesome things we have seen in our lives. You go just before dusk and wait. There is a little slit of a cave with some movement and sounds of small insectivorous bats, and gradually the movement and sound becomes more intense. Then, all of a sudden, bats begin streaming out of the cave, millions of bats emerging.

They stay in formation as a stripe across the sky, moving and breathing as sections fall out of formation and back in, or the whole line shifts like a wisp of smoke. It continues as far as the eye can see, and the bats keep coming for maybe a half an hour… Long enough for us to stay and watch for a while then drive to a spot by rice fields where we could see the stripe of bats across the whole sky, reaching from the cave out into the world. It was just amazing.

We are currently in the land of the flip-flops. We are also in the land where pale skin is prized and every product in a pharmacy is skin-whitening and people walk around in long-sleeved shirts, long pants, hats, even gloves, despite the brutal heat. So, at some point people must have realized that it was annoying to wear regular socks with flip-flops, and so: