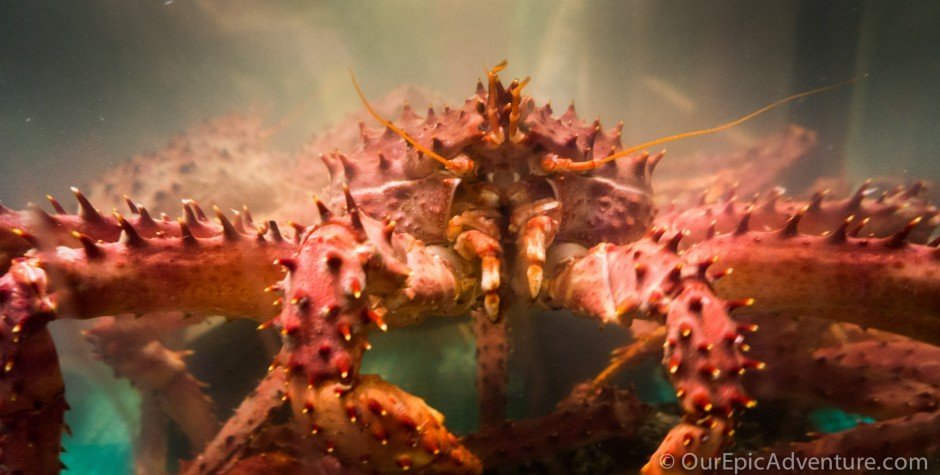 Some people come to Patagonia and Tierra del Fuego for the spectacular natural landscapes; others come for quaint old towns and/or tourist hotspots. Apparently we came for food, food, and more food!

After we left the Awasi in Torres del Paine (where we were surrounded by phenomenal natural landscapes while eating phenomenal food), we had a 5-hour car ride to El Calafate, during which we lucked out with a very easy and fast border crossing (we literally ran from the car to beat the line from an approaching bus at customs). The plan was to head straight for the airport in El Calafate and get on a plane for Ushuaia, where we would spend a few days before boarding our boat to Antarctica.

Aerolineas Argentinas had other plans. For domestic Argentinian flights, LAN is more expensive, less frequent, and more reliable. Aerolineas Argentinas is government-owned, cheaper, more frequent, but less reliable. Apparently their staff is on a permanent condition of semi-strike, but when we got to the airport and found out our flight was cancelled, they blamed it on weather. After a 3-hour wait in the airport, we were given boarding passes for the next day.

In El Calafate, we decided to stay in the so-called “nicest” place in town, which is La Xelena, and actually outside of town, and actually not nearly as stellar as it should be for the nicest place in El Calafate. We were tempted to go to Perito Moreno (an apparently epic glacier nearby), but after Torres del Paine we all needed at least a few hours of chilling out.

We went for a spectacular dinner at La Tablita, where we gorged on Argentinian meats (best. lamb. ever.), wine, appetizers, desserts, etc. At La Tablita, they roast their own meats, will make you a giant plate of mixed meat things that is overwhelming to even those carnivores with the biggest of appetites. The one catch is that you need a reservation to go there – we were massively lucky and the owner allowed us to take a table when a reservation was late.

The next morning, we looked up our flight info from El Calafate to Ushuaia and found out it was delayed a half hour… then three hours… then five hours. The Jewish Mama factor set in, and we hauled ourselves to the Aerolineas Argentinas office in town. (To note, Aerolineas Argentinas does not allow people to call up to change their reservations and such – you can only do it in person at one of their offices.) There, we were given yet another set of plane tickets, this one for a flight that was scheduled to earlier and had not been on the schedule at all the previous day. So… we hauled ourselves to the airport in El Calafate, checked in for our new-and-improved flight, and then proceeded to wait – while the flight was marked as delayed. Ultimately, the plane took off that day and we flew to the southernmost city in the world!

Our hotel in Ushuaia was a bit of a disaster at first glance. Hotel Las Hayas was arranged by Quark Expeditions (the Antarctic cruise operator) for one night, and Mitch’s parents had decided to get there a bit earlier. They had been told it is “5 star” and “the best in Ushuaia” – it is neither of those. For an exorbitant pricetag, the Bavarian-Grandmother stylings of tacky mismatched paisley and floral wallpaper, upholstery, bedspreads, shower curtains, etc., were sub-par, as were the twin beds in lieu of matrimonials, the bent shower curtain, the leaky heater in the room, the un-vacuumed floors in the reception area, etc. I never would have had the chutzpah to complain, but Amy got us upgraded to a suite for them and a junior suite for us, which was much better. Had its décor been described as “mid-20th century rustic ski lodge” and had it been half the price, it would have been a-okay. Not to mention – it was a good 10 minute drive outside of town and they didn’t run a shuttle or anything, so guests need to call and pay for cabs to go into Ushuaia.

So, we decided to make our Ushuaia experience about (shockingly) food. It turns out that Ushuaia has a fantastic array of haute cuisine. We went for dinner our first night at a place called Kaupe, where they specialize in seafood and had some excellent dishes with king crab and sea bass (not 100% sure on the Spanish translations, but that’s what the menu used). The crab-spinach chowder was excellent.

The next day, we went for lunch to a place called Freddy’s (officially La Cantina Fueguina de Freddy), where you pick out your own king crab, weigh it for the per-kilo price, and then it appears 10 minutes later ready for eating. While everyone in town said it was the best place to go for crab, and it was quite delicious, it was not mind-blowing. Ushuaia functions as a cruise-town in the summer months (ie: the northern hemisphere’s winter) and a ski-center in the winter months. The coldest months are apparently better for really meaty king crab, but it is tasty now nonetheless.

We had our next dinner feast at Kaur. To note, there are two restaurants named “Kaur” in Ushuaia – we were told to go to the one outside of town. It was, in a word, phenomenal. Our only problems were that the portions were too big and the flavors were too rich! They had a fish with a risotto side that was impeccable, their lamb with merlot sauce was fantastic, and their lamb ravioli (which we had with a mushroom sauce) was among the best things any of us had ever tasted.

Our last day in Ushuaia before the cruise, we were slated to meet up for our Antarctica expedition cruise at 3pm, so we decided to spend the morning taking a walk up the hills from our hotel. There is apparently a small glacier that is more commonly described as a “snow-pile” a 40-minute walk uphill, so we headed in that direction. We decided to get off the road and spent an hour wandering through cross-country ski trails way off the side of the road. It was really beautiful – lots of trees, slightly boggy grounds, and some gorgeous vistas where you could see the surrounding mountains and all the way down to the bay. We never actually made it to the snow-pile or the ski lift that can take you up it, but we did get to the little tea shop that people had said was near there. With about 40 different teas to choose from and some tasty treats, it was a lovely way to spend the last of our time on land before heading out to see for 10 days!

We’ll be posting about the cruise itself and the wonders of the Antarctic separately, but, on the topic of food… after the cruise, we had a few hours to kill in Ushuaia. Instead of doing something cultural like going to the museum in town, we decided to hunker down in a beautiful coffee shop to reconnect with civilization and the internet. We went to Ramos Generales El Almacen on Maipu street by the water, where they had really sweet décor, a fast wifi connection, and possibly the best almond croissants this side of the equator.

While Ushuaia definitely had a tourist-central, cruise-town sort of feel (and yes, you can get your passport stamped from the southernmost city in the world), it was quite lovely to wander around. There is some sweet street art, people advertising stores by dressing up as giant penguins, and we saw an aerobic class doing what looked like a great zumba-esque workout.

Stay tuned for our next blog post on the Antarctic, but here’s a sneak preview on why we fell head-over-heels in love with the ice: