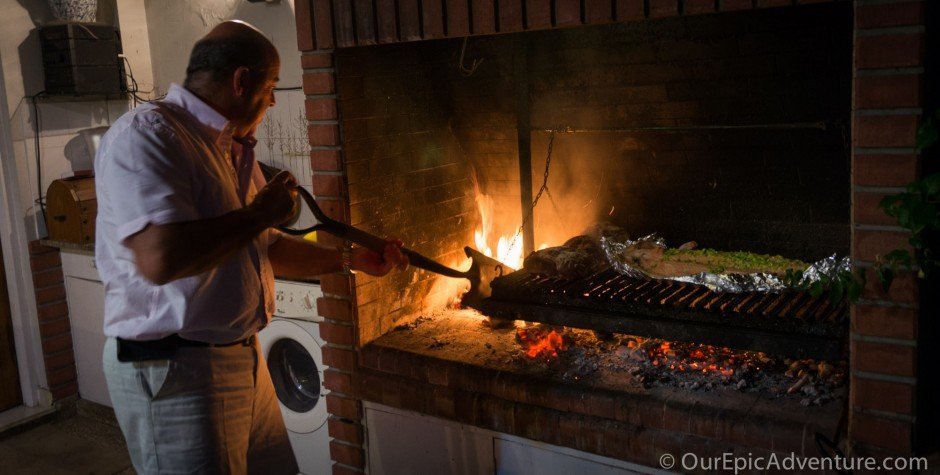 Not Enough Time in Buenos Aires

We only had a couple of days in Buenos Aires, which has barely been enough to give us a flavor of the city, but just enough to know that we need to go back.

Between Antarctica and Salta, we spent about two days in Buenos Aires (or BA, as it’s often called among travelers) with both sets of parents, and then after Salta, we had a bit less than a day there. Sadly, we never got to check out the nightlife or see the tango scene, and barely got to walk around most of the neighborhoods. There is definitely a trip back in our future!

The two days in BA between our Antarctica and Salta trips, we stayed at the Mine Hotel, a really great and modern-style small hotel in the Palermo Soho area. It is super cute and quite lovely. We first flew into BA with Mitch’s parents, Amy and Michael, and when we got to the hotel, Jewels’s Mom Karen bounded out of her room with her arms wide open, with her boyfriend Rich right on her heels. Having time with both sets of parents was really nice, and we were extra glad that they got to spend some time together.

We also had the very special treat of being shown around by a local couple, Horacio and Roxana. When Horacio was in high school, he came to the US and stayed with Rich’s family on a homestay, and to this day, Rich refers to Horacio as his “homestay brother.” Horacio and Roxana are beyond incredible – above-and-beyond warm, welcoming, and giving.

Our first night there, the 8 of us (the two of us, Amy & Michael, Mom & Rich, Horacio & Roxana) went for dinner to an Italian place that our hotel recommended which had some of the best burata imaginable. As usual, when we sat down to dinner at maybe 9pm, it was empty, but the restaurant was full by the time we left.

The next day, the whole lot of us spent the day in the Tigre Delta, which was exceptional. Horacio has a small speedboat and one of their (adult) kids has a yacht, so we spent the day between the two boats cruising around, having a lovely picnic lunch (they are super sweet hosts!) and the boys even water skied.

The delta is super beautiful. Getting there, we drove (in cars) through haughty Florida-esque houses, then drove the speedboat (super fun!) through various channels and such, until we got to the marina where their son keeps his yacht, at which point we tied the boats together for a fun flotilla. Lining the edges of the riverways and channels is super lush and full vegetation with water-covering plants, grasses, shrubs, and trees. The water is brown and murky from the natural sediments, but fairly calm. We saw a few pretty birds and drifted around a bit, including a refreshing swim (some of us with life vests).

Then we went to a beautiful spot where tons of boats were hanging out and we could see the city of Buenos Aires off in the distance. From there, the boys (with me as paparazzi) went on a speed-boat-water-ski expedition. We stayed there until sunset, which was really pretty and the clouds were magnificent, and then we watched the full moon rise into the sky. How interesting to realize that our last full moon was in the Atacama desert!

It was extra fun because, while Horacio’s English is excellent, Roxanna’s is a bit rusty – so she and I spent a long time talking in Spanish and/or with me translating for the other folks. She is a fascinating woman – reiki loving with a strong Catholic background, who is a poet and teaches literature to adults in a type of Catholic charity school. All this, and she is beautiful, incredibly warm and gracious, and has raised a whole army of a family. Now I just wish my Spanish were better so we could chat more!

A Day Around Town

The following day, we left the hotel around noon after spending the morning dealing with email and logistical issues at home. Us plus both sets of parentals took a longish walk through Buenos Aires. The heat was fairly oppressive, but we were happy to be moving our muscles. We went to an adorable Bavarian inspired coffeeshop for lunch called Gretha in the Recoleta, and saw a bunch of pretty statues and buildings.

Everyone told us the cemetery in Buenos Aires was a must-see, and we quite agree – it was fascinating. The mausoleum next to Eva Peron is for sale (location, location, location!), the buildings and mausoleums are crazy decadent with all sorts of doors, grates, stonework, gargoyles, steeples, etc. But, in true decadent fashion, much of it is crumbling, falling or fallen apart, etc. Taken all together, it is an interesting symbol of the evolution of wealth and physical property.

From the cemetery, we continued walking and passed these areas with huge old mansions, then went to the Teatro Colon (the Colon Theater), where we did an hour-long tour that was pretty interesting. The building is beautiful – gilded and decadent to the core of turn-of-century fashion. Planning started in 1880 and the building was inaugurated in 1908 with a notably bad production of Aida, after 3 different architects/builders (Italian, German, and French) had taken the reins of the construction. Apparently it is one of the 5 best acoustic opera houses / concert halls in the world, and one of the only ones with such phenomenal acoustics that is original and of older construction/materials.

Interestingly, when they were mentioning the major restoration that happened in 2002 – 2010 or so, they offhand mentioned that the peso was then about equivalent to the dollar (it cost $340 million for the full renovation). It was shocking. Now, the official rate is about Ps$6.7 per USD (it went up to Ps$8 per USD over the following 2 weeks), but there is mass recognition that it’s false. It’s like watching an economic collapse before our eyes. Check out our post on the peso here.

After the tour of the Teatro Colon, we took a cab out to the suburbs to Horacio and Roxana’s. There, we all had a giant family dinner, along with Horacio’s brother Claudio and his wife Janet.

It was super lovely – and the best of Argentinian food the way Argentinians do it! They have a huge brick grill (parrilla) in the backyard and there was, of course, an epic amount of meat, as well as lovely family-style conversation. They are just so warm and welcoming, and it was the best way to “eat where the locals eat” and gorge on meat in true Argentinian fashion.

By the time we were at the hotel and packed up, it was about 2:30am, and then we woke up the next morning for a very heartfelt goodbye to Mitch’s parents, with just a few tears shed. Then, the two of us as well as Karen and Rich went to the domestic airport to catch our flight to Salta. (More about that incredible 10-day exploration of the desert here.)

For our last 24 hours in South America, we flew back to Buenos Aires from Salta with Karen and Rich and the four of us got a cab to the Design CE Hotel in the Recoleta. The hotel is quite comfortable – a sparse modern design, attentive staff, 24-hour breakfast, and (most importantly) super fast wifi.

We all ended up staying awake until 2:30am. Mitch was getting hangry, so I discovered that the 24-hour diner called Madeleine’s near the hotel had ridiculously tasty empanadas. Thankfully, Mom and Rich had to leave for the airport at 4:45am, so we were all too tired for too many tears, and I fell promptly back to sleep after goodbye hugs and kisses. When the two of us woke up, we did a whole bunch of computer work, to hopefully square away a tenant for our apartment (cross your fingers for us, it sounds like a match made in heaven!) and drafting a lease. It was pouring rain, so we luckily didn’t feel like we were missing too much city exploration time.

We went out for a brief stint to go to the post office and mail thank you notes (25 postcards to the US was a whopping 475 pesos), a grocery store to get plane snacks, and a walk through the neighborhood. We went for our last lunch in Argentina to a place called Tea Connection, where we had a super expensive ($17 USD for both of us) but delicious yippie veggie meal with salads and such – we were grateful for a meat-free meal! Then we went back to the 24-hour diner from last night to get a dozen empanadas for the plane.

Then, we got into a cab that our hotel had arranged to the international airport for the fixed rate of 270 pesos. And we are on our way!

In case our thank you postcards get lost in the mail along the way, the following people, in no particular order, should (fingers crossed) hopefully be receiving mail soon!

Per usual, here are all our photos from Buenos Aires for your viewing pleasure:

Manzana (apple) Gatorade, why don’t we have this in the states? It’s delicious!!!