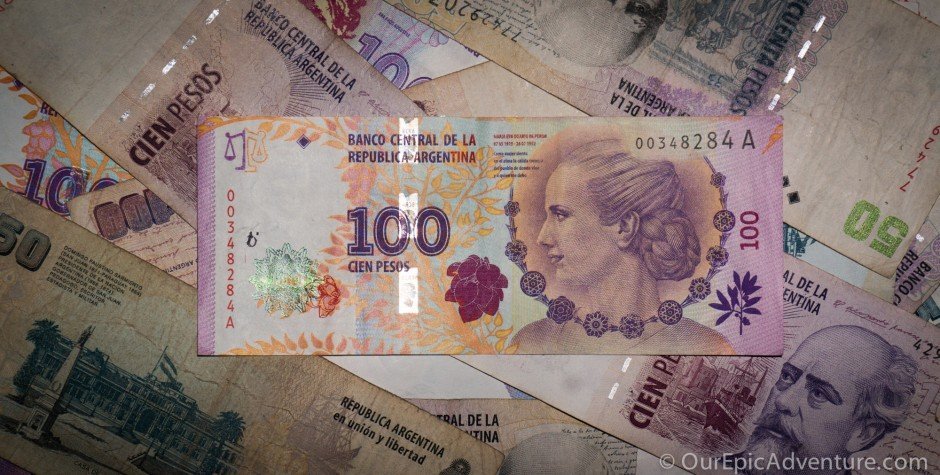 Argentinian Peso: On the Ground

While we were beginning to plan this trip, one of the first pieces of advice we received was “bring US cash to Argentina.” We’re not equipped to discuss why the Argentinian Peso is falling, how to fix it, or what it means for the national or international economy. But, we noticed a lacking of useful information on the internet, so here goes . . .

If you look at the Argentinian Peso over time, it used to be valued much higher against the dollar. For example, when we were on a tour of the Teatro Colon in Buenos Aires and they were telling us about renovation costs from 2002 – 2010, they mentioned to consider it as 1:1 with the dollar (Wikipedia says it was more like 1:3). Now, the exchange rate is much more volatile.

Official Exchange Rate: During our time here, the official exchange rate has been between 6.7 pesos and 8 pesos per USD (it was pretty static around 6.7 then lifted up). News briefs on local TV show politicians explaining that any other exchanges are illegal, but there appears to be broad acceptance of the existence of the blue market.

Blue Market: With the recognition that the official exchange rate is not market value, there is something called the “blue market,” where the value of the Argentinian Peso rises and falls as any other traded commodity might. For example, in about 72 hours, we watched the blue market price range from about 10.5 up to 11.8 pesos per dollar. Before we came here, it seemed to be mostly between 9 and 10. Now, it seems to have risen up to about 13. Most exchange houses in Buenos Aires seem to trade somewhat below the blue market value, but it seems you can negotiate, especially if you are trading a large quantity of dollars. Other cities/regions seem to trade at lower rates than Buenos Aires. As with any international money exchange, we were advised that newer and crisper dollars are preferred.

Broad Acceptance: To find a place that will exchange money on the blue market, most hotel concierge desks will tell you where to go. (In Buenos Aires, exchange houses with the best rates are apparently clustered on Florida Street, but there are also a bunch scattered throughout the city.) Many hotel concierge desks will actually change a small amount of cash themselves, for somewhere between the official and blue market rates. Many restaurant menus show a price in pesos as well as a price in dollars and/or provide a discount below official rate if you pay in dollars. And many stores, hotels, etc. will provide a discount below the official rate if you pay in dollars.

Tracking Blue Market Value: There are a bunch of websites and smartphone apps that track official value in comparison to blue market value. One that was recommended to us, by an Argentinian, was FyraStudio. (To note, it says that there is a separate credit card price, this applies to Argentinians who use their credit card abroad.) We have been told that credit card transactions for foreigners in Argentina charge at the official rate, but don’t actually know.

Please forgive typos and spelling/grammatical errors... we are posting from the road and often have limited time and spotty internet connections.