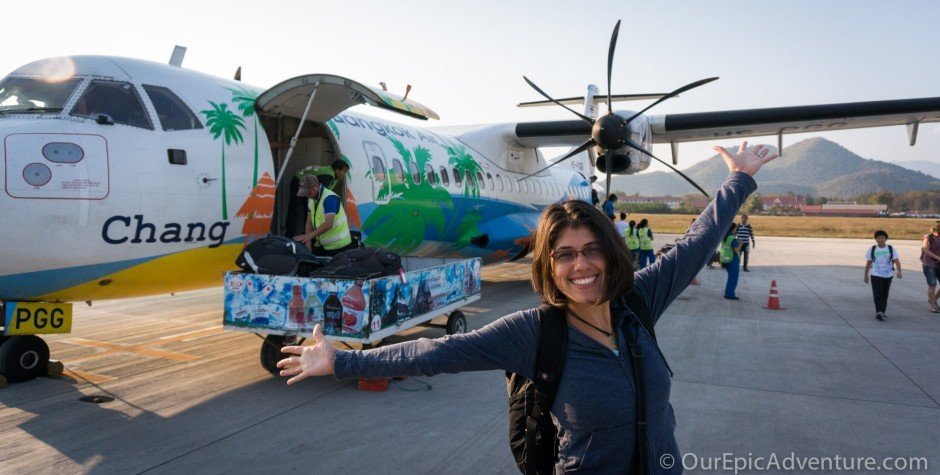 Victory (and exhaustion) after 36 hours of transit!

36 hours from the Americas to Asia

In our year of anticipated travel, we had a rough plan through the end of February, and zero plans after that. Our biggest transit was from Buenos Aires, Argentina to Luang Prabang, Laos, which would take 36 hours from starting airport to finishing airport and cost a whopping $4K of our total budget.

As with any trip, we have had our share of travel snaffoos (such as the passport debacle, which means Jewels still doesn’t have an Indian visa), and when we got to the airport in Buenos Aires for our stupid-long flight to Asia, we hit a roadblock.

We had printed out our boarding passes online but went up to the counter to check our bags, and the adorable-looking and likely well-intentioned ticket counter lady asked us to see our tickets out of Laos before she would take our bags. We answered (as any seasoned travelers would) with a gentle lie and said that we were doing a program which had locally purchased bus tickets out for us, so we could surely ask them to send those to us via email before we reached Laos, but couldn’t supply them before checking in.  She was firm in saying that we were not allowed to check the bags (and that we shouldn’t be allowed to have the boarding passes) without our ticket out! We had one hour to figure something out.

There is no wifi in the Buenos Aires international airport, but there is a communications center. Since we had zero Argentinian pesos left and they wouldn’t take a credit card, they gave us the generous option to change American dollars at less than official rate and get change in pesos. Through a stroke of luck, we had a $20 bill and did not have to change our emergency hundred! (Huzzah for losing $20 instead of $100!)

We went online and discovered that you cannot purchase a ticket out of Laos on a bus, boat, or train (that would be too easy), so we went ahead and looked into airfare. The best we found was $200 per ticket to Bangkok. In our panic and desperation, we hit purchase.  There, we had a stroke of luck.  Since we did this on the Laos Airlines website (which allows free date changes), you don’t actually put in your credit card but effectively ask them to hold a spot and invoice you. (We have already emailed asking them to cancel.)

We went back to the ticketing counter with our printed flight reservation, and the other agent never even asked for it! To note, they didn’t ask for our ticket out of Laos there, or at any of the airports, or our on-arrival visa application in Laos, or at customs. Avoiding a string of profanity, we are so thankful that only damage caused the well-intentioned ticketing girl was the loss of $20 and a minor heart murmur.

Meanwhile, the 36+ hours from that snaffoo until we touched down in Laos were remarkably smooth. Emirates Airlines is fabulous and the level  of service in economy is much like first class in the states (including constant feedings).  While the seats are not “first class,” they are quite comfortable. They even have a little star motif in the ceiling lights to emulate the night sky!

We got through our layover in Rio without disembarking, and then barely slept on the flight to Dubai thanks to an excellent movie and TV selection on our personal screens. The Dubai airport is super trippy and like every stereotype we imagined: clean, huge, technologically-capacitated (check out the hologram giving directions), shopping oriented, and space-agey, with a diverse population that included a lot of veiled women. It was so well-orchestrated that it made me want to go up the down staircase!

On to Bangkok, were the 6-hour flight felt short in comparison and we slept from takeoff to landing. By the time we reached Bangkok, our sleep deprivation and the 12-hour time difference had caught up with us. Thankfully, the light outside the windows informed us that it was afternoon, and the gracious Thai people just put their hands in prayer when we responded to their broken English with Spanish!

Our Bangkok Airlines flight to Luang Prabang was on a tiny, ocean-painted airplane (not sure who came up with that idea), and we were asleep from before takeoff until landing!

Here in Luang Prabang, we have a couple of days to recover from the extreme travel and jetlag before beginning a month with the Thai Massage Circus. More on Luang Prabang and the Circus later.

For a fair heads-up, we will have very limited and sporadic wifi access for the next month, so look forward to some lengthy posts when we return!