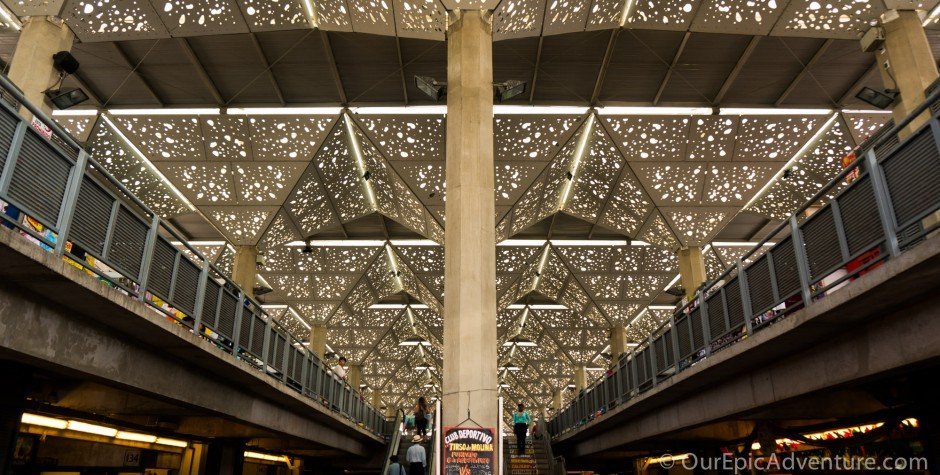 The awesome ceiling of the main market in Santiago.

Less than 48 Hours in Santiago, Chile

We have only been on the road for about 6 weeks, but somehow stepping onto a metro felt like a breath of fresh air to displaced New Yorkers. While we didn’t hit up all the usual suspects for tourism with our limited time, we soaked up being in a lovely urban environment. A lot of people and guide books tell you to prepare for the smog – but it was more of an L.A.-style smog (much about Santiago felt very L.A. to us) that gently hung above the city, not the black clouds of soot belched out by hordes of buses, taxes, cars that careen through intersections with no traffic signals that you get elsewhere in South America.

Meanwhile, when we crossed from Bolivia into Chile, the clock changed an hour (we are now 2 hours ahead of eastern time instead of 1 hour), so we started to go to sleep later and wake up later. As soon as we flew down to Santiago, the time of sunset shifted about an hour and a half – so our traveler schedule of going to sleep before 10pm and waking up around 6 has shifted. Last night we pushed ourselves into bed around midnight and now, as I draft this at 8am, Mitch is still dozing in bed.

We arrived in Santiago from the airport and made our way to Steven and Josefina’s apartment – old friends of a good friend of ours in NYC, who graciously invited us to stay. They gave us really good directions, and we were very thankful for it. From the airport, instead of an overpriced cab, we took the Centropuerto bus, which cost $2 or $3 USD per person into the city, then jumped onto the metro, which is about $1.50 USD per person and quite easy to figure out. From the metro stop where we got out, it was a 4 block walk along a pedestrian-only street to their place.

Steven and Josefina were super lovely hosts. They had a wealth of information to share, a lovely apartment in a fantastic location (their balcony looked out on the Plaza de Armas right in the center of the city), and a friendly cat. Plus, Steven makes his own natural yogurt and granola, of which our bellies were extra appreciative!

After we got in, settled in, and had a long chat with our hosts, we realized it was nearly dinner time, and we offered to take them out as a token of our thanks. We went to a Peruvian restaurant, where we ordered chirimoya juice (seriously, why is it so hard to find chirimoyas in the U.S.?) this crazy octopus with olive sauce, and a grandiose plate of seafood prepared in a million different ways that we split between the four of us and stuffed ourselves silly. (But, committed to the cause, we managed to finish even the last few bites.) After that, our hosts took us around for a walk of the center of the city for a little while and pointed out some of the sights and localities.

Our next morning, we woke up late and had a slow start to the day. We walked through town, crossed the river, and stopped at the market where we picked up a few things (delicious juices, over-bread-y empanadas, and some dried fruit for snacking). Then we took a long walk, legitimately a hike, to and from the Virgen that stands on top of a giant hill in a park overlooking the city. It was a beautiful walk up and had great views of the city, and there were mounds of candles in remembrance near her that coated the entire ground in slippery wax. It was impressive… and we only managed to get slightly lost on the way back down.

Then, we walked through Chinatown (Coreatown here, it seems?), wandered into a few storefronts, and saw a collection of gift-box-set Spam in a small market. We walked through the discoteque-and-autobody area, not unlike NYC’s West Chelsea in the combination of industry, but better in the street graffiti murals. We wandered through a park where we ate ice cream and watched these kids who were ridiculously good slackliners; instead of the slow and intentional yoga style we see, they were bouncing themselves up and down in different ways.

Getting back to the Plaza de Armas, we stopped to check out an immigrant festival, with music and dancing on a little stage; there are some incredible street performers around that area – a slow, mime-style dancer who was just phenomenal, and a group of comedians that drew quite a crowd. Way better than La Paz.

We grabbed a bunch of hoops and the four of us (us two plus our hosts) went over to hoop in a park, where I realized just how out of practice I’ve gotten, but we had a good time nonetheless. Then back home for dinner.

The next morning, we took the metro to the Museo de la Memoria (Museum of Memory), an interesting museum on the human rights infringements under the Pinochet dictatorship. It was really interesting, and the audio-guide was critical to understanding the museum as a whole. The museum is free and the audio-guide is worthwhile for $4 USD/person.

The museum was fascinating and deeply disturbing, but it felt like the exhibits (and even the information in the audio-guide) were designed for people who knew a lot about Chilean history. We have just vague general knowledge, and we wanted a little more fact and context. (For example… More about the public opinion of Allende prior to being overthrown? How exactly did the democratic election that pushed Pinochet out come to pass? What happened after he was ousted?  How did that transition happen? We did some follow-up reading in Wikipedia.)

After the museum, we walked back to the Plaza de Armas, collected our stuff together, and had lunch at a Peruvian sandwich shop before taking the subway to the bus station to move onward to Valparaiso.

Additional Thoughts on Santiago and Chile

We have to admit that we really liked Santiago – and felt immediately at home on the clean and highly functional metros. And, of course, being able to drink tap water is a nice treat. It was also great to get a bit of background on Chile and Santiago from Steven, our host, as a Canadian/U.S. expat who has lived here for a few years. Here are a few nuggets that we thought were interesting…

Chile is obviously a weird-shaped country with its crazy-long reach. It was apparently one of the poorest, last-to-be-developed, and most useless regions for a really long time and through the Spanish domain, despite the potential of coast port locations (which were a pain to reach with the mountains) because so much of the country landscape is not useful. It seemed like the weird shape is because it was almost just constructed of “leftovers.” That said, apparently underneath the city of Santiago are pre-Colombian ruins, and that this was the southernmost center for the Incas.

Chile has a relatively small population (18 or 19 million people), although the Santiago metro area has 45% of the population and 55% of the wealth. There is a small but rapidly growing immigrant population – lots of Peruvians, Colombians, and other groups are moving here. (Which means lots of great Peruvian food in Santiago.) Adding in Valparaiso and Vina del Mar, those numbers are even larger. Geographically, the northernmost third of the country is desert wasteland (with some random industry thrown in; it’s now a top lithium-producer). The southernmost third of the country is, economically, a wasteland of gorgeous nature by largely inaccessible disconnected islands, fjords, etc. in an effectively Alaskan climate. So you’re left with the urban areas in the middle plus some agriculture on either side.

They also struggle with the fact that things cost a lot here (edging on North American prices), but, while people have more money than in some other South American countries, the average income is dramatically lower than the prices of things would indicate. Also, apparently in Chile there is a 19% sales tax built into everything and all the prices we see on stuff. They give you receipts for EVERYTHING: you buy an empanada for $0.75 USD, you get a receipt.
Interesting but unrelated tidbit: despite being a very dry country, Chile is a lead producer of cranberries – but they don’t eat any here and have no idea what they are used for.

There is also a lot of opportunity for tourism, although Chileans are still figuring it out. At this point, they charge (and overcharge) for everything. For example, there is no separate Chilean vs. foreigner fee to for the national parks, and even camping in the parks is stupid expensive.

The awesome ceiling of the main market in Santiago.