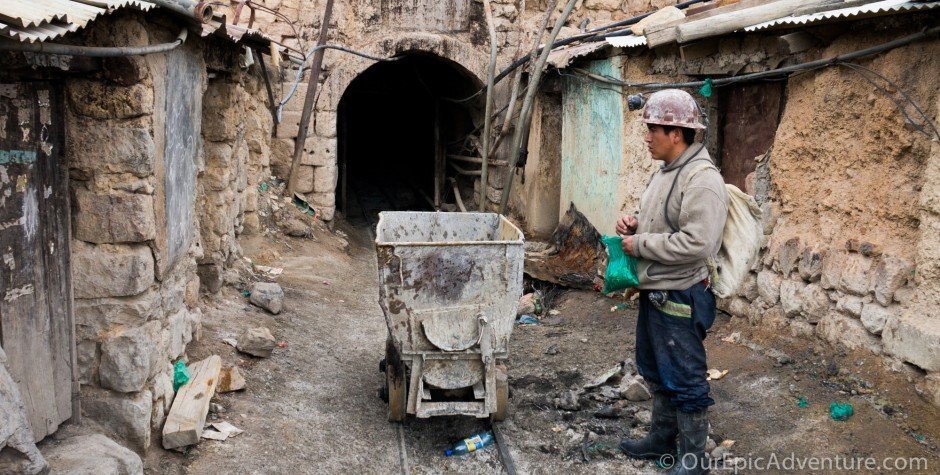 Entering the mines of Cerro Rico

In the Belly of El Dorado

The Spanish search for El Dorado took them to what is now Potosí, a town overshadowed by a huge hill that has been a major source for silver (and other ores and minerals) for nearly 500 years. We decided to go on a tour of the mines, an experience that was surreal, memorable, and eye-opening.

The Trip from Sucre to Potosí

We woke up on Sunday morning in our lovely hostel in Sucre, had breakfast, packed up, and got a few salteñas for the road before heading to the bus station to go to Potosí, Bolivia. It was a really pretty 3-hour ride through desert mountain landscape.

The first half hour was dominated by one of the “live infomercial” style of salesmen that are on many buses around here – he was hawking some sort of teeth whitener and fancy toothbrushes, but he took so much time getting to his sales pitch that we wondered if he was part of some government campaign for dental hygiene. Alas, he was just really passionate about his product.

In other news, one girl brought a cat on board that was chilling on her shoulder in the terminal, and which proceeded to doze at the back of the bus the whole way, with a little yellow string attaching the girl’s finger and the cat’s neck. I’ve seen chickens and sheep on South American buses before, but this was the first time I’ve seen a cat!

A Day in Potosí

When we got into town, we went to the hostel where we had made a reservation. (We have gotten a bit tired of the wander-around-town-for-a-hostel scenario and decided to do some bookings in advance.) The Koala Anexo is part of a Potosí tourism chain (3 hostels + a travel agency) and is right across the street from the bigger Koala Den – but it is much cheaper than its neighbor, includes a good breakfast as well as a kitchen for us to use, and seemed to be sufficient enough. The rooms were adequate but smelled strongly of the polisher they use to clean the floors (we worried we would get high off the fumes), the shared bathroom was adequate (although the light didn’t function), and the downstairs common area and kitchen were sufficient although a bit dingy. What was weird is that it seemed like the ladies running it had no clue what was going on or how to respond to pretty standard requests, although everything was pretty functional in their main hostel across the street. But, for the cheaper price, we were fine with it.

After we settled into the hostel, we wandered around the town for a bit. The city is dominated physically, economically, and culturally by Cerro Rico (“Rich Hill,” the giant mine). There are two bus terminals – the old one is pretty standard for South America, but the new one feels bizarrely space-age. There is also a space needle thing on a hill outside of town (which we later found out is simply a viewpoint).

Aside from that, the city was pretty much a ghost town on a Sunday afternoon. Oddly, Sunday night there were many more people out on the streets walking around. We are a bit bummed that the National Casa de Moneda, which is supposed to be an awesome museum, is closed Sunday afternoons and Mondays, so we weren’t able to go. The town seems to be overall quite nice, with a pretty central plaza, some interesting artwork, and a variety of narrow cobbled streets.

On Monday morning, after breakfast we went for a walk, which included a stop at the Torre de la Compañia de Jesus, a bell tower in the middle of town. The $1.50 USD entrance to the bell tower, where you can enjoy lovely views as well as a massive quantity of pigeon poop, was worth it. The walk up is odd – you walk through the façade of an old church building (with the bell tower at the top), whose interior has been turned into a modern glass-walled municipal building, then through a dark circular stone staircase to get there. The stairway may have been the most memorable thing, but the views were nice too.

What stole the show for our whole Potosí experience was a tour of the mine, which was bizarre and disturbing in a very existential way, but we are so glad that we went on it.

Some people and reviews consider a tour of the mines to be dangerous, but it is an incredibly worthwhile experience. We booked our tour with Koala Tours (the same people who ran our hostel), where it was about $12 USD for the half-day tour; we were quite impressed with their service and guides. Our group ended up having two guides so we were able to split into a Spanish-speaking group (only me and one other person) and an English-speaking group (which Mitch went with); we were intrigued that we took different paths within the mine and got a broader collective experience and amount of information.

The tour started with a stop to change our clothes into scrubby outerwear, rubber boots, helmets, and big (super strong) headlamps. I am SO grateful that we brought bandanas for our faces; they were hugely beneficial in the mines. Then, we went to the miner’s store, where we tasted the 96% alcohol the miners drink, got shown how dynamite works (we didn’t have any explosions, which are illegal to do for tourists and quite dangerous, but we got a thorough explanation), and bought presents for the miners.

After that we went to the ingenero (refinery), where we saw the process by which the rocks are pulverized and then chemicals, including arsenic, are added. The “precise” method for adding chemicals includes plastic bottle caps on wheels that pickup and splash the chemicals down little plastic bag chutes, that feed into tubes traveling into the floor below.

Through the process in the refinery, they extract silver, zinc, lead, and tin from the stones. Here, the miners are all independent collectives, so they sell the rocks they mine directly to the refineries, which are 30-some little companies. Our guides said the refineries used to just put the wastewater into the river, but Germany and Japan apparently financially coerced Bolivia to switching to a better environmental practice a few years ago.

From there, onto the mines themselves. There are 180 mines in the mountain (each run by a different collective) and approx. 15,000 miners currently working. It’s shocking and nauseating to imagine 15,000 people at work under that mountain, especially once you experience it.  The conditions are pretty awful — the average life expectancy for miners here is just 40 – 45 years. Before that, they often have severe respiratory issues (silicosis).  One of the guidebooks said that when their lung capacity is reduced to 50%, the government will pay approx. $15 USD/month to them as a weird kind of pension. A couple of miners had high quality respirators, but we only saw one miner actually wearing it (others had them around their neck or in some other useless place). When we asked the guide why everyone didn’t wear them, he said simply that it’s too hot and hard to breath through them, so most just don’t bother.

The mountain has been mined for nearly 500 years, including by indigenous slaves (which were responsible for the better constructed archways near the entrances) then African slaves, and after many iterations of ownership and management, we have come to this collective system. Our guides told us that the average unskilled salary in Potosí is Bs 1,000/month (approx. $145 USD), but the miners can make anywhere from Bs 2,000 to Bs 6,000 (the prices of the minerals change regularly, as does the amount they mine and the amount of mineral in the rocks). Our guides said that the minerals will run out within a few years – to imagine the economic effect of that on the town is almost as nauseating as imagining the 15,000 people at work in the mines now.

The miners. Oh, the miners. The tour guide has been a guide for 14 years and spent 5 years as a miner before that. They legally start working at age 18, but many (MANY) people start as young as 12 or 14. Miners often develop severe respiratory problems and die young (at which point their eldest sons often take up the work, or their widows start working at the mine entrances sorting stones). In the mines, they have created shrines and give offerings to the Tíos (uncles), characteristically a mix of the Christian devil and older gods who control this underworld hell hole where they spend countless hours.

It was a bizarre experience. You have no idea how deep inside the mountain you are at any given time, sloshing around mining tunnels of different heights, widths, temperatures (which vary dramatically), odors, levels of dustiness, climbing through big and small holes, into tunnels, ladders, up, down, and over. We were able to crawl into some of the spaces where the tunnels caved in and see how the tunnels were changed or propped up with wood after a collapse. At different places they have winches (electric and hand-cranked) or tracks for the carts that the men pull and push by hand with pure brute strength to move the rocks out (literally weighing between ½ and 2 metric tons when full of rocks). I have never felt as weak as when we watched these men, who truly work deadening hours, which range from 8 hour days to stints of 24+ hours, since night and day do not exist in this place.

We met miners as young as 15 working in there. We watched miners pick up 50 kg bags of rock. We watched them pull, push, and tug on 2-ton carts full of rock to get it out of the mines, and saw the struggles when the cart would get stuck. We heard the jokes and jests as they coped with their work in life… Demonstrating how dynamite worked, one miner lit the end and held it up high, laughingly asking “Who wants to die?” before breaking off the lit end so it wouldn’t light. We saw them taking breaks to rest, laying down on the floor of a tunnel and just breathing the foul air.

There are few words to describe the experience, but after less than 3 hours in the mine, it was a beautiful experience to physically see the light at the end of the tunnel as we approached the mine entrance, and to take full deep breaths of outside air. I think that individually, we all decided not to ask about the frequency of collapses, accidents, casualties, or other tragedies because we simply did not want to know while we were inside. Instead, we just had to have confidence in the mountain and the guides, and send our good wishes to the Tíos for our few measly hours inside.

What I cannot stop thinking and imagining is this: If you were 12 years old and went in for your first day of work in the mine, what must you think as you emerge into the sunlight after your first day of grueling work in the mine? And what would you hear – likely from your father, mother, or brother – to get you to go back in for a second day? What emotions would possibly go through your 12-year-old mind as you mentally prepared to go back in for a second day… and every day after that until your lungs finally started to collapse….