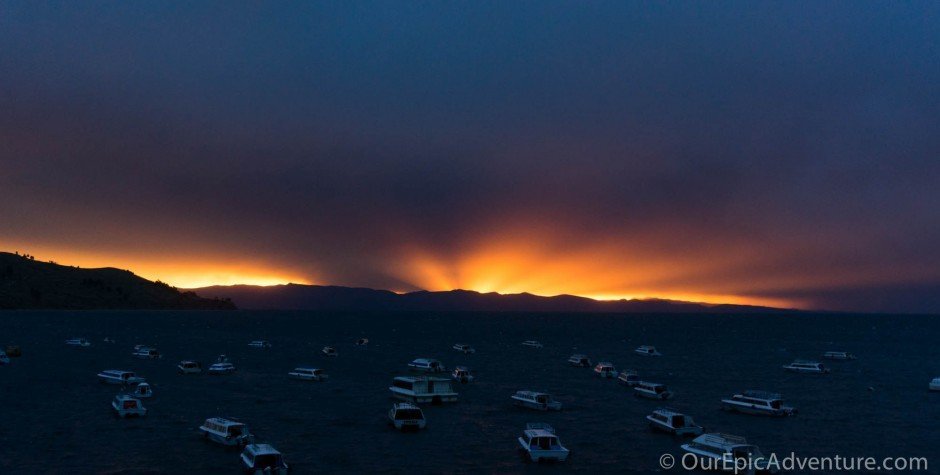 With sunsets like these, it’s no wonder this was thought to be the birthplace of the sun!

It’s been an incredible 4 days at Lake Titicaca.  It’s no wonder the Incans and other cultures thought this was the birthplace of the sun and mankind, and why so many tourists consider this to be a highlight of South America.

We heard that Puno (on the Peruvian side of the lake) was not all that amazing, despite the floating islands, which are apparently fun for a lot of travelers.  So, we decided to travel straight from Cusco, Peru to Copacabana, on the Bolivian shore of Lake Titicaca (more about that journey here).  Once you actually cross the border, it’s just another 10 minutes to Copacabana.

Copa has a TON of hotels and hostels.  There are some cheaper options up the hill toward the main square, and some exciting options up the hill on the side of town, including a hotel that is in construction now where you can stay inside of a giant snail:

We ended up in a slightly bizarre place (in a different way) for both our first and last nights at Lake Titicaca. Hotel Vina del Lago is right on the water and looks out of place in Copacabana; it’s white and blue and somewhat grandiose with large windows and private balconies on many rooms.  Most people we met negotiated to approx. $20 USD (Bs 140) per night for two people, including breakfast.  We were not that wise and vastly overpaid the first night, although we were able to negotiate to underpay the last night so it evened out to the $20 USD that everyone else paid.  But, the staff was seriously cranky with us and they decided to withhold eggs and juice from our breakfast and to withhold towels for a few hours.

Overall, so far we have been enjoying the flexibility to not just go with the lowest priced options on our travels and, despite how out-of-place the hotel is here, we enjoyed the gorgeous view and private balcony.

We opted to go to Yumani, on the southern side of Isla del Sol, where there is the highest concentration of hostels.  When you get off the boat and start climbing up the stairs, you’ll see a TON of options.  We recommend climbing up for a good 20+ minutes until you near the ridge at the top (even though the incline is daunting).  In addition to just having more options, the real bonus is that you can not only see sunrise from the side of the ridge where the boat lets you off, but you can cross over the ridge and have early dinners watching the sunset on the other side.  For hostels/hotels, budget options are about $5 USD per person with shared bathrooms, or about $12 USD per person with a private bathroom and breakfast included.

We ended up staying in probably the most incredible hotel room I’ve ever seen in Latin America.  Casa de la Luna is a gorgeous new hotel.  It costs about $14 USD per person, including breakfast, and is worth every penny (and then some).  It has only 3 rooms now.  They all have phenomenal views (with huge glass windows on two sides), although we were lucky to get the top room, which is extra magnificent.  There is a gorgeous private bathroom, with marble floors and hot water.  The rooms are architecturally quite lovely (a rarity in Latin America), the beds are super comfortable, and the views are just spectacular (sunrise, lake, boats, clouds, sky, and when the clouds clear way, a huge glacier/nevada that you can stare at right from the room).

Copacabana was lovely….  We had lunch (you can get a totally solid set lunch for $3 USD) and spent the afternoon wandering around a bit, including playing with some kids in the main plaza area with a hula hoop.  It’s always good fun to hoop with kids and actually allows you to break out from the tourist perspective for a while.

It looked like a fierce storm was brewing in the afternoon and evening, and it sent dust flying in gusts and made our hair feel totally playafied.  But we only got a few drops of rain and a truly spectacular rainbow – not like a regular bow, but clouds of rainbow.

And the sunset… spectacular.  I have honestly never seen anything quite like that.  Somehow with the lake, clouds, and mountains, there were golden rays emanating over the horizon… and you could immediately understand why the Incans and other indigenous cultures thought of this lake as the birthplace of the sun and mankind.

With sunsets like these, it’s no wonder this was thought to be the birthplace of the sun!

We had breakfast at our hotel in Copa then took a boat (approx. $3 USD) to Isla del Sol, a 1 ½ hour journey.  The boat ride is lovely, but the only hitch was that the captain tried to take everyone straight to the northern side, instead of dropping people off at the southern side as had been promised when we bought our tickets.  Thanks to a slight damsel-in-distress act, they let us off on the southern end, at the base of the Escalera de las Incas near the town of Yumani, where most of the hostels are.

The Escalera (staircase) is as arduous as you might imagine from other Incan staircases, and the famed 3 fountains (for the 3 Incan rules of don’t steal, lie, or be lazy) was frankly a bit lame.  We did enjoy a walk up to this viewing area up on a hill, where you could see down all sides of the island.

We had some great conversations with other travelers (including our first NYC-acquaintance on the road, and a lovely couple from Canada), and then walked over to the other side of the ridge to watch the sunset over dinner… where mother nature puts on a spectacular show and puts any human attempt at cinema to shame.  They sky made gorgeous splotches of rainbows and there was almost the feeling of an oil spill of iridescence between the clouds.

The power went out at night; we were wondering if there just wasn’t any power on the island at night… but it turns out that there typically is power, but that it gets cut at least once or twice a month whenever the winds pick up and it seems like a storm may be coming.  (Bring a headlamp with you… even when the power is working, it’s still helpful.)

Over breakfast, we watched the sun through the clouds sparkling on the water, while the wind made these remarkable patterns in the gentle waves.   There’s a little cat at the hotel that plays and acts more like a housecat than a streetcat (and made us miss our little Neko)… and the sounds of donkeys braying makes a fascinating auditory backdrop.  They must be the strangest sounding creatures in the world – we keep trying to figure out what they might possible be trying to communicate in such a pained way.

With no cars on the island, it’s extra impressive to realize that everything is carried by people or animals – making the huge glass windows at our hotel even more impressive.  There are a ton of donkeys (whose noise never ceases to be comical), lots of sheep and pigs, some cows and llamas, and we saw one horse.

After breakfast, we started out to hike the big loop around the Isla del Sol.  From our hotel in Yumani on the southern end, we walked up the central ridge, had lunch on the north side, and then walked back south passing through all the towns.  It was a bitching walk – they estimated 7 hours; we did 6 ½, including a 45 minute lunch stop.  Somehow the altitude is killing us both here… hiking through 4km-high desert under a blazing sun is intense!  (Note:  even if you don’t normally get sun burnt, wear extra sunscreen.)

But, the views are just stellar – absolutely magnificent – and it is bizarre to acknowledge the altitude because at times the lake looks like the sea (but with the wind making magical patterns in the water).  To note, you need 2 tickets to circle the island, totaling approx. $3 USD, and you need to hold on to them since they check at multiple points.  The ticket for the north side, thankfully, has a map of the island on the back.

After the hike, we came back for a rest and walked over the ridge for dinner and the sunset-show.  It’s interesting because there is a natural inclination to go into the restaurants that have people in them, although realizing that everyone dining in restaurants are tourists, it doesn’t actually mean that the food is better if there are more people.

The restaurant where we went on Sunday night, Markasata, was quite good – they had legit good pizza (not New York, but super solid for South America) and some really fantastic pancakes (for some reason, that’s what I wanted for dinner).  We were the first people to walk in, and then since we were sitting there, at least 3 other groups came in.  The owner seemed a bit stressed out to have 4 tables occupied at once, but our guess is that each restaurant is totally empty 75% of the time, and full the other 25%.

On our walk back to the hotel, the moon was full and bright in the sky.  It was pretty incredible to watch how it streaked light through the sky, lighting up the Nevada and the rippling lake below it.

We woke up in that glorious hotel room – Casa de la Luna – had breakfast, and then made our way back to Copacabana, with great conversations on top of the boat along the way.

We spent the afternoon wandering around Copa, including sitting on a bench in the square while a random dog decided to be our friend, and reading.  The street dogs and cats so far seem to be more pets than street animals – well fed and relatively healthy.  It’s a pleasant surprise after other South American places!

Then we had a lovely dinner at Orillas, one of the many restaurants on the main drag here in Copa (where the food was significantly better than most of the other places), and went back to the hotel before heading to La Paz Tuesday morning.