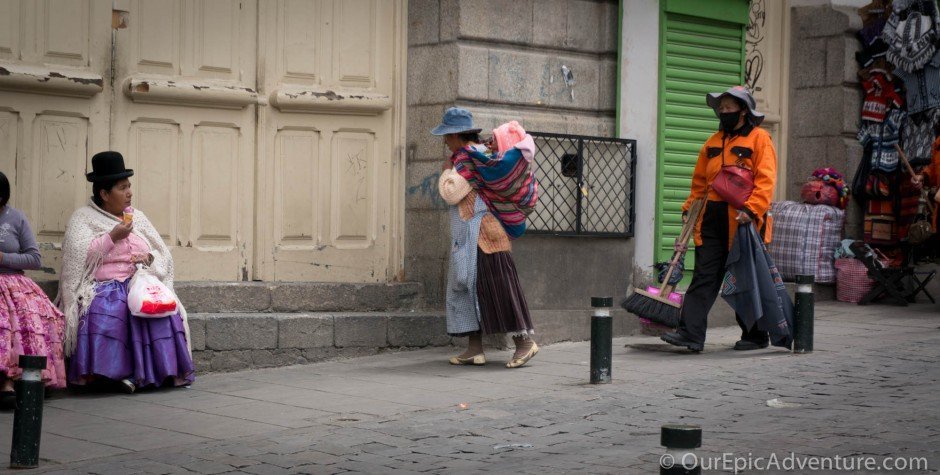 On the streets of La Paz, Bolivia

In and around La Paz, Bolivia

We are about to pack our stuff up after a day and a half in La Paz, the highest-altitude capital city in the world (or so they say). Tomorrow morning we are flying up to Rurrenabaque, in the Bolivian part of the Amazonian basin, so our next blog post, coming sometime next week, may be rich with nature photos. In the meanwhile… about La Paz!

Traveling from Copa to La Paz

We left Copacabana yesterday morning and took a 3 ½ hour bus ride to La Paz for approx. $3 USD per person. The ride itself was smooth and uneventful, although at one point, you need to get off the bus and take a rickety ferry across a section of Lake Titicaca, while your bus (and all your stuff) is on another barge. For the first part of the drive, you are actually going right along the Bolivian side of the Peru-Bolivia border, so to the right of the bus is actually Peru – it’s a strange area to look at on a map in terms of how political borders are drawn.

When the bus gets to the La Paz area, you first drive through El Alto, an area that stretches a huge distance outside of the city on a hill above La Paz proper, and is known for being politically active (that seems to be the politically correct way to say it). The drive through El Alto is interesting – there is a much greater indigenous population (at least by the way people dress), it’s much more impoverished, there are, oddly, lots of construction projects, and it’s just super, super, super dusty.

Our Hostel in La Paz

Once we got to La Paz, we got a taxi to bring us to a neighborhood that seemed to have a lot of hostels and went exploring. We ended up at Muzungu B&B, which is totally sufficient. For $16 USD for the two of us, we have a private room and bathroom, with a hot shower, (meager) breakfast, a drink each night, and wifi. The room is nothing special, but we have lots of natural light during the day, which is frankly more than we expected in La Paz.  There is a restaurant attached to the hostel which is a bit pricey for dinner, but quite good food. The hostel also has a common space on the top floor with a bar, pool tables, a variety of sitting areas, and (at night) really loud 80s hair metal… but some tremendous views overlooking La Paz.

Yesterday, after we settled into the hotel and had lunch, we went out to explore the city, focusing on a few missions (a new plastic bottle for our face wash, whose bottle broke, and more batteries for our magical Steripen, which is worth its weight in gold but keeps blowing through batteries). We have been enjoying having missions as excuses for urban explorations (we had another plastic bottle mission in Cusco) – it seems to get us out of the tourist areas and able to see areas we might not otherwise experience.

La Paz doesn’t seem all that exciting. There are plenty of tourist-friendly attractions in La Paz and surround areas, but we opted to try to just get a feel for the city and regroup a bit. Mitch likened exploring different areas of the city, away from our hotel, as “imagine if people visited NYC & never left Flushing.”

It’s super dirty here – the exhaust from cars and buses is outrageous. The pollution has literally been making us feel ill, and we are quite glad to be leaving La Paz tomorrow. Crossing streets is total pandemonium; traffic seems to stop when there are lights, but there seem to be about 6 lights in the whole city. The bus terminal seems quite lovely compared to other Latin American cities. So far, we haven’t felt unsafe at all, which is nice in a big city. We have not actually gotten to hear much about the Witch’s Market or do a tour, but it’s about 2 blocks from our hotel and there are dried llama fetuses of various sizes and stages of development hanging from various stalls – totally bizarre.

This afternoon we went to a yoga class at Case Del Sol, which appears to be the only yoga studio in La Paz. While the teacher was very nice, the class was, in a word, awful. It was 1 hour 45 minutes, and the teacher began by telling us that hatha yoga is different from what is practiced in the States (without asking if we had ever practiced hatha yoga). We thought it best not to interrupt to tell her that we have practiced hatha yoga, which was probably for the best since it was unlike any yoga class either of us have ever taken (hatha or otherwise).

There were 5 students in the room, and I swear the teacher was barely present. We will reserve judgment on the fact that the teacher could barely do any asanas herself (forget about touching her toes), but it was shocking to see a teacher yawn (literally – yawn!) so many times in a class or spend so much time picking pieces of lint off her mat.

Here is how the class went… We started with a half hour of weird calisthenics. Then the teacher told us to go to the cold showers and scrub vigorously (the two of us just had to do our arms because we didn’t have towels). After that, we had a half hour of savasana, which started with the teacher asking us each to spell out our first and last names (once we were already laying down). Then, we had “asana” practice, which meant about 6 poses (with terrible adjustments) each held for too long with no counterposes or alignment cues, followed by maybe 5 minutes of meditation. Finally, we stood up, held up our right hand, said “pax” in unison (I think for “peace”?), which felt a bit like Mork & Mindy, and that was it.

The good news is that we could both handle a yoga class in Spanish.

We walked from the yoga class to an art opening that was hosted by the US Embassy. A friend of a good friend of ours had invited us to it, and it was the work of Michael Schwab, a Marin-based graphic designer who has done several recognizable posters and logos. It was really nice to see La Paz the way we might live in it, instead of just as travelers. From that little snapshot and the people with whom we talked, La Paz seems like it may have a vibrant little arts community and some good activities going on for socialization. Also, the DJ playing the event was notably great.

Pro tip for the future, we are planning to become a Facebook fan of US Embassies for different countries when we are in their capital cities to find out about open events!